Recently had the pleasure of chatting with Gary Anderson host of Night Dreams Talk Radio and his producer James Creachbaum.
Listening to talk radio forever, and mainly Coast to Coast AM, it was informative to hear Gary's take on how the talk radio business works.
He started in talk radio after his military career where he listened to a show called Nightcap where they talked about anything and everything all  night long.
After the service he followed his dream into commercial broadcasting.  His plan to spin Top 40 abruptly ended when his station was changed to news/talk after one day of employment.
Nevertheless, Gary found the paranormal as a topic and this has worked for him for 46 years. 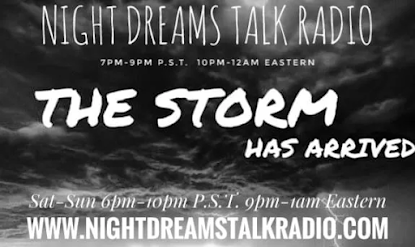 One of the very cool things about his career is that he became friends with Art Bell and I think we could say that Art was sort of his mentor, also.
He made many trips to Art Bell's studio in Pahrump, Nevada.  They had many things in common including paranormal talk shows and they both were Ham radio operators.
They both had strong feelings about having a certain respect for the guest and the audience.
I learned that from Art--I never talk down to the guest or use swear words and I try to maintain a certain respect for the audience.  I do not insult the audience.  I do not like that.
I treat the guest I am interviewing as if they were sitting on my couch in my living room.  I want them to feel comfortable and relaxed and I think it makes for a better interview and therefore it is better for the listener.  It is a better show.
They have respect for the audience.
The show is free.
They are not offensive and  there is not swearing.
Gary Anderson's respect for the show, the guest, the audience, the topic come through loud and clear.  His zeal for what he does is the take-away from my conversation with him.
It was actually uplifting and I would like to convey that in this report.
Gary Anderson is happy to tell people about his radio show and that is admirable in this day and age.
I interview somebody as if they were sitting in my living room.  I want them to know I am paying attention and interested in what they are saying.
Seriously, when you are chatting with him on the phone, he does make you feel like you are the most important person in the world.
He is good.  He is a good interviewer.  I was interviewing him--he was actually better at interviewing me--he is that good.  He is interested in what you say.  Gary has that lovely radio voice and the ability to ask questions.  He brings the best out of the person he is talking to.
I take and old school attitude on the interview with the guest!

I talk to the person like they are sitting in my living room on the couch.

I pretend they are right there with me and not on the internet.   I am not about making money.  I am not selling dating.  My old shows do not cost money to listen to and they are not going to--I strongly believe in that--I am not going to charge somebody to listen to my old shows.
I am not selling dating and I am not selling vitamins
To be continued.........
Part 3 of my interview with Gary Anderson is coming up with more fascinating facts about his life, his career and his radio show.
Thank you, Gary
Thank you, James
Listen to Gary Anderson on his website:
Night Dreams Talk Radio
or
Google Play, I Heart Radio, I Tunes, and many other radio and internet channels.
You will find many ways to listen on his website or just do a quick Google Search and plenty of selections come up.
................................
Love just listening to the radio in the night after being on the comp, all day, but nevertheless, so happy to find a new station and choices.