The Big Interview with Gary Anderson

The Big Interview with Gary Anderson

So honored to speak with Gary Anderson host of Night Dreams Talk Radio.
Listening to night time talk radio forever and finally getting a handle on how it works.
Talking to Gary one gets the impression he is excited about his show, the guests and telling everyone about the
upcoming shows.
He has made a success of his night time talk show based on the paranormal--he loves it and he loves sharing it.
It comes through in his voice--his enthusiasm is genuine.

Gary explained he has been a big talker from the get go.  It would not be unusual for his teachers to ask his parents to try and keep him quiet.
After his stint in the service and becoming proficient as a CB radio operator he decided to follow his dreams and attended a Seattle trade school.
The goal was to follow his idol, Top 40 Spinner Doc Maynard.
Unfortunately, the day after he landed his first position in Big Ground, Washington near Vancouver he was informed the station had changed the format to news/talk.
Gary Anderson searched the newspaper for an interesting chat subject, finding an article about abduction. His audience latched on to the subject--that was in the 70's--and he has been talking about the same thing ever since.
I have always been infatuated with the radio since I was a little kid.  I have been in this business for 46 years.

Two Big Talkers--Gary Anderson became Friends With Art Bell
They both were into paranormal radio chat shows and they both were proficient ham radio operators.  A few times a year Gary would make the trip to Nevada to visit his friend Art Bell.  Everyone knows Art Bell from the original Coast to Coast AM radio show that went on for several years, very successfully.
Art's show was entertaining, easy listening and interesting.  Yes, the subject matter was paranormal but at some point one can only listen to so much news or music and a good story works well for the long haul in the  night or for those who cannot sleep.

Art and Gary Anderson have many of the same qualities.
They do not shout at the guest or talk down to the callers.  They are not offensive and they have respect for the audience.  The show is free.  There is not swearing on the show.
I learned from Art to buy the best equipment.  Spend the money and it is better for the listeners.  I have better equipment now here in my studio in Washington than some radio stations do.  I am independent.

To be continued.......
The Big Interview with Gary Anderson Part 1
You can listen to Gary Anderson on his website:
https://nightdreamstalkradio.com/
You can also listen on Google Play
I Heart Radio
Tune In
and many other stations, traditional radio stations and internet stations.
There are several ways to listen on the website and he is easy to find on a Google search. 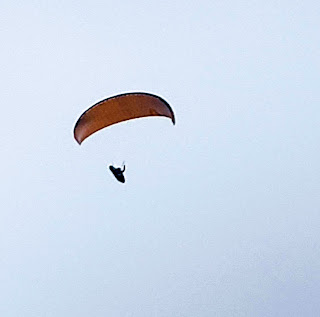 Stay tuned to find out more about his exciting life, his current shows and interesting facts about the radio.
Gary and Producer James, thank you for taking time to chat with me on the phone.

photos:  from that little beach under the Magnolia Bridge
Posted by Chloelouise at 12:13 PM