San Diego Wild Flowers, Auga Caliente County Park,
Posted by Chloelouise at 10:37 AM No comments: Links to this post

It makes a delicious tea party in the afternoon.

Posted by Chloelouise at 11:10 AM No comments: Links to this post

Alia is my favorite cook--I have been watching her forever.

What is your favorite cooking show?
Posted by Chloelouise at 2:44 PM No comments: Links to this post

The Mommie and the Baby: Eagle 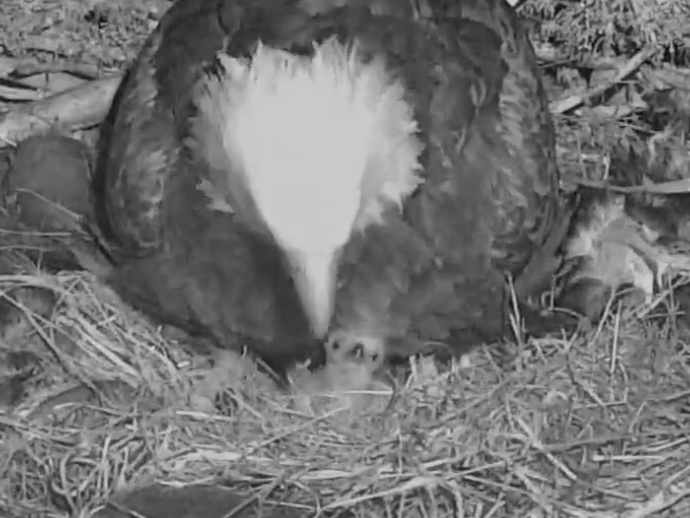 From the live cam at explore.org. 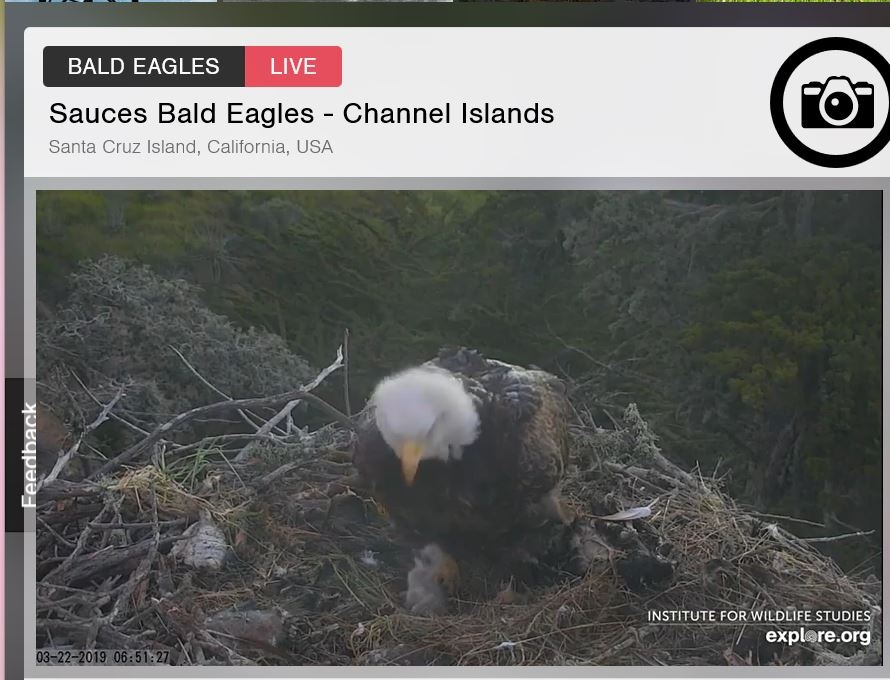 https://explore.org/livecams/bald-eagles/channel-islands-national-park-sauces-bald-eagle
Posted by Chloelouise at 11:46 AM No comments: Links to this post

Email ThisBlogThis!Share to TwitterShare to FacebookShare to Pinterest
Labels: explore.org, live cams on The Channel Islands, Sauces Bald Eagles on Santa Cruz Island, The Mommie and the Baby: Eagle 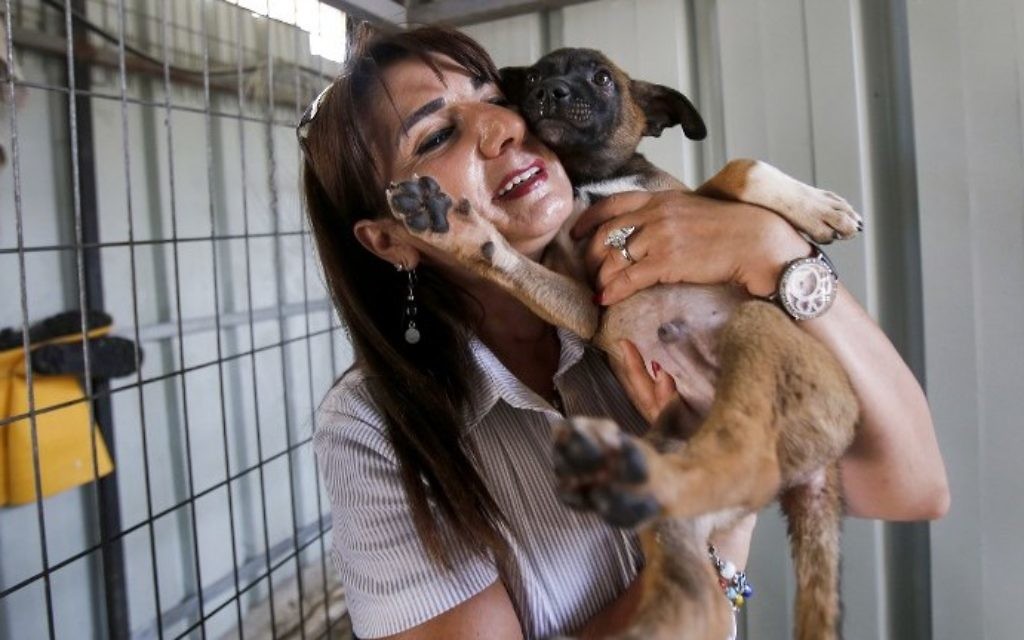 Diana Babish, an ex-banker from the Palestinian city of Bethlehem, carries a dog at the first dog shelter in the West Bank, in the town of Beit Sahour, on August 25, 2017. (AFP Photo/Musa Al Shaer)
The quest to save man’s best friend has brought together an unlikely pair: a former Palestinian bank manager who never leaves home without her makeup and high heels, and a straight-talking Australian volunteer who drives her around as she rescues stray cats and dogs throughout the West Bank.
But with an eviction notice from the Palestinian Authority’s Regional Environmental Health Department for the animal shelter founded by Diana George Babish, a Palestinian Catholic from Bethlehem, hanging over their head for two months now, Babish and Sophie Thompson spend their time rescuing homeless animals and ferrying them to a vet in Tel Aviv for medical treatment. With help from a handful of Israeli animal rescue volunteers and some dedicated Palestinian animal lovers, they are also finding permanent and foster homes for as many of the cats and dogs as they can.
The cited reason for the threatened eviction of the Animal and Environment Association Bethlehem shelter from its cement structure in the Area C location on the edge of Beit Sahour, south of Jerusalem, is “to preserve the public’s health and safety.”
Get The Times of Israel's Daily Edition by email and never miss our top storiesFREE SIGN UP
“They are saying we were polluting the water and people are complaining about the noise, but they have no proof. There is also an (awful) petting zoo here and a slaughterhouse (in the area, that is allowed to operate untroubled),” said Babish, who quit her prestigious and well-paying job last year to work full time for the shelter she founded in 2013.
A Palestinian Authority judge postponed a February 5 hearing on Babish’s appeal of the eviction until next month because nobody from the Palestinian Ministry of Health, Health Department or civil government bothered to show up.
Though there are rumors that Babish will be given the opportunity to find an alternative site for her shelter, the manager of the PA’s Environmental Health Department, Dr. Ziad Shqair, declined to comment on the matter, Beit Sahour Mayor Jihad Kheir did not return phone calls and Shukri Radaydeh, general manager of the civil governance, could not be reached.
There a few other Palestinian organizations that take in street animals — including a private cat sanctuary in Hebron — but Babish’s is the only shelter that continuously fights against the torture and poisoning of the creatures, provides them with needed medical care including neutering and vaccines, and actively searches for homes with Palestinian or Israeli families. According to Palestinian volunteer Sari Freitekh, indeed, there is a growing awareness about the plight of street animals among Palestinians largely because of some of the work Babish does.
The shelter takes in mainly cats and dogs, but no animal in need is turned away, and in 2017 it rescued two donkeys and took them to a donkey shelter. 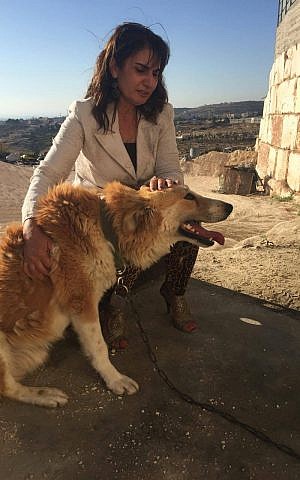 Diana George Babish, founder of the Animal and Environment Association Bethlehem, rescued Dobby from the streets as a puppy. He was then adopted by a family in Hebron but shot in front of their house one night by Palestinian Authority police, she says. (Courtesy: The Animal and Environment Association Bethlehem shelter)
Babish’s goal is to design and maintain a modern state-of-the art animal control shelter to provide high quality rescue, care and treatment for homeless animals in the West Bank.
Babish and Thompson spent Christmas Eve bringing an array of cats and dogs from the shelter to adoptive and foster homes in Israel, fearing that the shelter would be closed at the end of December. During the last torrential storm, Thompson drove their beat-up white van up to Hebron and then to a Tel Aviv veterinarian clinic to rescue a puppy who had been tortured and had his back sliced open down to the muscles.
For the two women, these were just two regular days spent in animal rescue. Most of her animals are treated at the veterinary clinic in Tel Aviv, and she and Thompson travel there several times a week.
Palestinians are slowly becoming aware of her work through word of mouth and her presence on social media. With the option available to them now, some know to call her when they see an animal in trouble, said Babish.
It was former Beit Sahour mayor Hany Hayet who gave Babish permission to open her shelter at the site, in part because no other construction is possible in the area; it is under Israeli administrative control, she said, and all infrastructure construction is done by Israel, which does not allow Palestinians to build there. 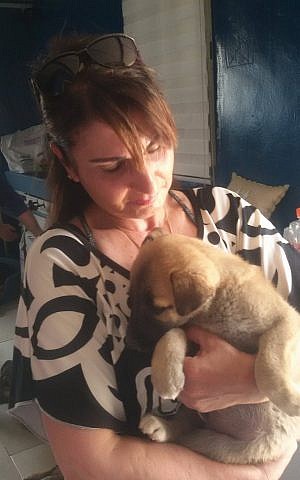 Diana George Babish and a rescued dog. (Courtesy: The Animal and Environment Association Bethlehem shelter)
Babish used $20,000 of her own money to refurbish the current structure. It has been financed with donations, and run in part with assistance from Israeli animal rescue organizations and individuals. Many of the dogs and cats she has rescued over the years have been adopted or are being fostered by Israelis.
She has to date rescued over 400 dogs and more than 100 cats from the harsh streets of West Bank cities. Recently she sent 15 dogs for adoption to Canada.
“Diana is quite isolated among her population as people seem not to be concerned about her mission,” said Rachel Bento-Touitou, an animal rescue volunteer from Tel Aviv who has been coordinating online efforts to find placements for the animals. “She is extremely dedicated and will move mountains for the animals. The fact that she is fighting an entire system makes her a hero in our eyes and we need to support her.”
Babish continues to work with Israeli rescue organizations despite the many critics within Palestinian society, including members of her own family, who complain about her interaction with Israelis and about her efforts helping animals when there is so much need among Palestinians.
“We in the rescue community put aside politics for the well-being of the animals,” said Babish. “I tell (my critics) God gives each one of us our mission and there are a lot of organizations taking care of people. My mission is to take care of the animals, the most vulnerable beings in the world. If we had people who would adopt the dogs here (in the West Bank) I would leave them here, but Palestinians don’t want street dogs. They want purebred dogs.”
She admitted it is not an easy mission in a place where, she said, society traditionally gives little importance to treating animals with compassion and widely considers government-approved shooting and poisoning of stray animals as the best solution to population control. 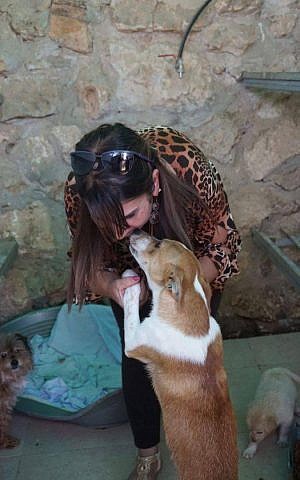 Diana George Babish and a rescued dog. (Courtesy: The Animal and Environment Association Bethlehem shelter)
Babish’s work is “far from ordinary,” said young Ramallah animal activist Freitekh, and she has survived against all odds in one of the most animal hostile municipalities, he said.
He said Babish and other animal activists like himself have made some inroads with the Ramallah municipality, which recently agreed to look for different methods of dealing with the street dog problem other than shooting the dogs. He noted that there have been attempts by some Palestinian officials who appreciate the work Babish is doing to find her an alternative location.
Freitekh predicted that in the next few years Ramallah will open an animal shelter and start promoting “dog-culture.”
As part of her work, Babish has worked with Father Marwan Di’def, principal of the Franciscan Terra Sancta School in Bethlehem, to raise animal awareness among the students by bringing kittens and puppies into the classrooms.
“Diana is doing really unique work. Animals are one of the creations God gave to us as a gift and we can’t let other people treat them badly. We opened our doors at the school so the students would have this experience of respecting animals, God’s creations. Instead of shutting the shelter down, (the authorities) should help her and give her a bigger shelter,” said Di’def. “She is trying to change the mentality and culture here.”
In Jerusalem, Chaya Beili, a board member of the Jerusalem Society for the Prevention of Cruelty to Animals (JSPCA) and the volunteer manager of the JSPCA’s animal shelter in Atarot, north of Jerusalem, said the JSPCA is in touch with Babish, whom it has helped in the past at its spay and neutering clinic, to monitor the current situation to see what assistance will be needed should the Beit Sahour shelter be closed.
“We always try to help,” Beili said. “These animals are being brutalized by the authorities who should be protecting them. Unfortunately the territories are much worse (for animals) than the Jewish parts of Israel.”
READ MORE:
Posted by Chloelouise at 10:47 AM No comments: Links to this post