The Killing Fields of Gaza

Gaza continues to be desperate. Your help is needed. 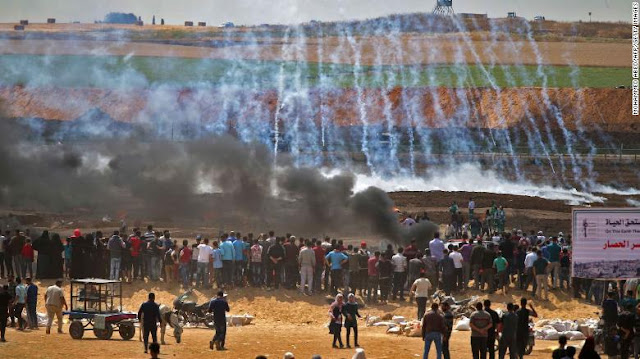 Imagine a giant prison bounded by the sea on one side, and fences and walls on the other three sides. The original prison guards were thrown out in 1967, and the new prison guards evacuated themselves in 2006, retreating to the prison borders, sealing it off except for a few heavily guarded entrances, fortresses along the prison’s land border, and gunboats patrolling the shoreline. Since then few have been allowed to enter or exit. A bare minimum of goods are permitted to enter, barely enough to allow the subsistence for the inmates.

One of the prison gangs took over the management of the prison, and terrorised the inmates into compliance with their demands. Rival gangs have sent a some small rockets over the fence, causing little property damage and almost no casualties. This results in remote retaliatory attacks by the prison guards via drones, rockets and bombs. Most of the prison inmates live in fear, from the Israelis, from Hamas, and of destitution and despair. There is little hope for the future

The 2 million inmates of Gaza have no citizenship - no state - no freedom.

Over the past two months, tens of thousands of people come to the fence every Friday to protest their plight. A few try and approach the fence. Some burn tires and throw stones across the fence. The vast majority stay at a distance. It seems likely that these protests are organised by Hamas. It’s also possible that Hamas is orchestrating and planning for the eventual killings, by managing teams of people who are trained and instructed to approach the fence. And yes, there were a few visible armed protesters.

Israel set up teams of snipers and is playing its part by shooting them down. It’s all very predictable. Just a last week, about 60 people were killed in a calculated manner by these snipers. It’s a turkey shoot.

Much of the foreign media mirrors the official Israeli use of words like ‘clashes’ or ‘riots, describing the protestors as ‘terrorists’. Terminology is used to imply that Israelis are at risk, and the fence might be breached.  Israel fuels this misconception by massing troops along the Gaza border, backed by teams of paramilitary police.

CNN International said that the ‘clashes’ resulted in ‘deaths’, as if they were acts of God, yet also allowed that ‘Many of them caused by Israeli fire’. Even Israel’s liberal Haaretz newspaper called the protest a ‘clash’.

There were no ‘clashes’. Every Palestinian was murdered on their own side of the fence by Israeli snipers on the Israeli side of the fence. No protesters came in close contact with any Israeli soldier, not was there any possibility of this happening.

Every Palestinian murder was a calculated decision of an Israeli sniper or his/her immediate commander, in accordance with their rules of engagement which allows the killing of unarmed Palestinians who are causing no immediate danger to anyone.

These tactics are the same as used by colonial empires of bygone eras and other authoritarian regimes of today, which prohibit any actions by disenfranchised people protesting their rule. The British likewise conducted lethal reprisals against protests by their subject peoples in India and Africa. China has more recently followed suit. Israel has learned well.

Non-violent protests are especially feared by the state of Israel, and every effort is made to ensure that violence ensues, thus justifying the killings, at least in Israel’s worldview.

Make no mistake. If Israel wanted to use non-lethal means to drive back the few hundred protesters that approach the fence, then it has sufficient means at it’s disposal, notably water cannon and tear gas. However it also serves Israel’s purpose to conduct these killings.

Israel also needs to learn that murderous repression of protest never has the desired results in the long term. Palestinian steadfastness will not be contained by murder and slaughter. Ultimately the likes of Hamas and the Zionist regime will be tossed in the dustbin of history, and the liberation of the people of Palestine and Israel will be realised. In the meanwhile people are being killed.

Your support is critical at this time. Here’s what you can do:
In Peace,
Fred Schlomka
CEO, Green Olive Collective

This very important post was copied from the blog of Green Olive Tours.

Here is a link to the page:

Thank you, Fred, for taking time to share with us these very important words and your thoughts on this issue.

Just returning from a visit to the area and wanting to let everyone know the food was delicious, the countryside was lovely, biking through hills of almond and olive groves and the hospitality was something to write home about.

Always wanting to visit the city after the tour going to Ramallah on my own was fun and interesting.  It is easy to see the city because it is small and not difficult to navigate.  The shop keepers are friendly, often offering coffee and a sample of their goods--please visit the candy shops.

The Arafat Museum was very well done--recomending it to anyone interested in this very famous person who holds the heart of the Palestinians.

Area D Hostel is a good price, the people there are very willing to answer questions and take time to chat and the breakfast is particularly nice and well worth the price.  The gentleman that serves it is a good cook.

Area D Hostel is right across from the bus station so it is very easy to get back to Jerusalem and then go to the airport from there.

Do not miss the vendors with the cups of corn with lemon, spices, salt and butter and the falafel shops.