When he lost his dog, this elderly man thought he was all alone in the world The world showed him otherwise. CHRISTIAN COTRONEO April 3, 2018, 4:28 p.m.

When he lost his dog, this elderly man thought he was all alone in the world

The world showed him otherwise.

80-year-old Ken holds his dog, Zack, for the last time. (Photo: Carol Burt)
Not many people at the mobile home community in Hemet, California, could say they knew their neighbor Ken. The 80-year-old retiree kept mostly to himself — his only companion a little dog named Zack.
"I know quite a bit of people from walking dogs because I foster a lot," neighbor Carol Burt tells MNN. "I had seen Ken with Zack a couple of times. He’s very quiet. Doesn’t say anything. Just kind of a wave and we went on."
But one evening, about two weeks ago, Burt suddenly found herself an unlikely lifeline for them both.
There was a furious banging at her door. It was one of her neighbors, telling Burt she needed to pay Ken and Zack a visit.
"Okay, let me finish dinner and I’ll go look," Burt said.
"No, you need to go now," the neighbor said. "Go right now."
Burt rushed to Ken’s mobile home, where she found the 16-year-old dog suffering from a litany of health issues.

Zack the dog was 16 years old and in need of a veterinarian. (Photo: Carol Burt)
"Ken was in tears," Burt recalls. "He said, 'I don’t know what to do. I have no money to take him to a vet.'"
This little community of seniors didn’t have a lot of money to pool together, especially for an emergency room visit. So Burt took her plea to social media.
"When I was walking back to my house, I thought, 'Well, I’ll just put it out on Facebook.'"
She figured she might be able to get $50 or even $100 in donations.
An hour later, she got a call from Elaine Seamans, founder of the At-Choo Foundation, a rescue that typically focuses on getting help for shelter dogs in need.
"What are your plans for getting Zack to the vet?" Seamans asked.
"Well, we’re going to go Monday morning," Burt replied.
"No, you’re going to go tonight. I will cover all the medical expenses."
Burt walked back to her neighbor’s place and told him to grab his coat — they were going to the emergency clinic.
But once there, they soon realized Zack wouldn’t be coming home again.
"We lost him that night," Burt says. "He had so many, many issues going on with him."
Ken lost a piece of himself that night, too. He wept uncontrollably when holding Zack for the last time.
"They were together alone," Burt says. "These two had not had any other companionship except each other for 16 years."
During that soul-rending goodbye, Burt took a picture — "just a quick snapshot," she says.
But it was an image that would resonate with anyone who’s ever said goodbye to the love of their life.
Seamans of the At-Choo Foundation posted the image to Facebook.
"I thought, 'Oh my God, we can relate to that grief,'" she tells MNN. "I wanted to send him a card and I wondered if other people would, too."
They did. In fact, countless cards and letters and offers of support flowed to the foundation from around the world. An artist offered to paint a picture of the pair. Someone else pledged food for life for Ken’s next dog. A teacher had her entire class write letters of encouragement.
"So many people cared who he didn't know and would never know," Seamans says. "I am blown away by all of the people I am reaching on the foundation page."

Cards and donations flooded to this little community from around the world. (Photo: Carol Burt)
As for Ken, there’s a twist. Burt has been delivering letter after letter to the grieving man. She says it made a real difference.
"He was so overwhelmed by people sending cards who didn’t know him," Burt says.
One day, surrounded by cards, he held one up to Burt and said, "I don’t know these people. I have never met them. I never will meet them. And yet, look at this!"
"He was crying for the loss of his dog and also crying because so many people cared who he didn't know and would never know," Burt explains.
Maybe the emotion was too much for Ken. Two weeks after he'd lost Zack, he had a heart attack.
But even at the hospital, his neighbor and newfound friend was there for him. She took him cards, letters, home-cooked meals. She even brought one of her foster dogs for a visit.
The dog would sit in Ken’s lap and, for a little while, brought him some cheer.
"And then he’ll look up at Zack’s plaque and his little box," Burt recalls. "I could see the devastation in his eyes and I just know it’s time to go. He’s had enough and wants time with Zack again."
But the letters keep pouring in. Seamans is sending another heap to the man as he recovers in hospital. There are offers to pay for a dog adoption. And food for life. And medical care…
Donations, too, are piling up.
"I was hoping to generate just a couple of dollars to get Zack to the vet on Monday morning," Burt says, her voice choked with tears, "It’s turned into this. It’s amazing."
So get better, Ken. The whole world is pulling for you. And the letters are piling up. But most importantly, a little dog has left a legacy — a whole new life — that’s just waiting to be lived.

It turns out Zack left the biggest legacy of all for his old friend — a brand new life. (Photo: Carol Burt)

copied from mmn.com on yahoo
the mother nature network 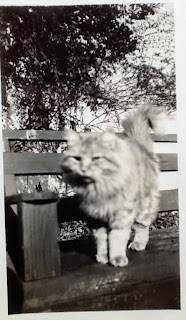 Email ThisBlogThis!Share to TwitterShare to FacebookShare to Pinterest
Labels: 2018, 4:28 p.m., mmn, Mother Nature Network, this elderly man thought he was all alone in the world The world showed him otherwise. CHRISTIAN COTRONEO April 3, When he lost his dog