The Arab Heroes Who Saved the Mark Family: The @JewishPress on @TheRonnieRe

The Arab Heroes Who Saved the Mark Family

The first people on the scene were Arabs driving by who stopped and helped save the Jewish terror victims.
By: Jewish Press News Briefs
Published: July 4th, 2016
Latest update: July 5th, 2016 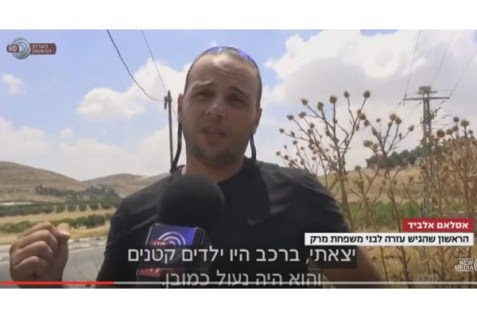 Islam Albid - The first person who helped save the Mark family after the terror attack.
Photo Credit: Mabat - Israel TV
After Jihadi terrorists opened fire on the vehicle of Miki Mark and his family on Friday near Otniel on July 1, 2016, the first people on the scene were an Arab couple from the village of Al-Farar, Islam Albid and his wife, a nurse.
Seeing the overturned car, they immediately stopped and managed to get a door open and pull the trapped and wounded children out of the car.
The couple got the wounded children into their car, tried to calm them down (in perfect Hebrew) and called for a Red Crescent ambulance.
Albid told Israel TV that he did it “for humanistic reasons and of course for Allah.”
A few minutes after that, an Arab doctor, Dr. Ali Abu Shruch, a kidney surgeon from the village of Dahariya in the southern Hebron Hills, drove by with his brother and his brother’s wife. They were on their way to pray in Jerusalem.
In an interview on Israeli TV (see video below), the doctor described how he assessed the situation, and freed the mother, Chava Marks, who was being suffocated by the seat belt.
At that point a Red Crescent ambulance and an IDF army jeep arrived. A MDA ambulance arrived a few minutes after that.
It was then, when the doctor checked the father, Miki Mark, that he realized this wasn’t an accident, but a terror attack and they had been shot, and Miki was dead.
During the interview, Dr. Abu Shruch emphasized that he wasn’t a hero. He has an obligation to treat everyone and as a doctor he doesn’t get involved in politics, he was doing his job.
He said his friends have all blessed him for his honorable actions.
The doctor passed a message along to the family saying, “I know the damage to the family is hard, but I want them to know I did all that I could to help them.”
After the funeral, members of the Mark family pointed out that the first people on the scene trying to help save them were Arabs, and one must not think all Arabs are terrorists.
There is hope after all.
Jewish Press News Briefs

About the Author: JewishPress.com brings you the latest in Jewish news from around the world. Stay up to date by following up onFacebook and Twitter. Do you have something noteworthy to report? Submit your news story to us here.
copied from the jewishpress.com and here is a link to the page:

Email ThisBlogThis!Share to TwitterShare to FacebookShare to Pinterest
Labels: The Arab Heroes Who Saved the Mark Family: The @JewishPress on @TheRonnieRe