The Perils of Renting: Read it and Weep--Pit Bull City

This is Ronnie, my baby boy and the love of my life.

He passed away almost a year ago at the age of ten years........I think I am ready to get a dog now as I am getting so fat from not walking and I am tired of going to the dog park by myself.

Also, summer is here and I would like to go to the dog beach.....it is just who I am. 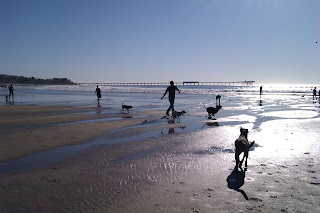 So I moved over here to my little rented condo in a very small complex on the border of North Park/City Heights.

Seriously, every dog owner knows it is almost impossible to rent with a pit bull mix so I readily opted to rent from my previous landlord/property manager as I could not find anything affordable in South Park and I was getting tired of folks hanging up on me.

Also being in a time frame and having to find space suitable for my 99 year old mother, as well.

So right, I moved in, My landlord well knew my Ronnie and I felt like we had a pretty good relationship from my over two year prior situation.

Every one saw my very well behaved beloved as he was quite well mannered, walked well on a leash, was overly friendly and liked other dogs and cats.

He was old and there was not any yard or patio so it was not like he was out on his own or available for anyone to have contact with without supervision.

Is it in the stars or what?   So sad about the loss of Ronnie, life is just not good without a dog.   Every attempt to get a companion ends in failure.

Put in a little more effort and do not try to replace Ronnie but get a dog a little bit like him in his honor.

Scanning dogs on Pet Finders and always wanting to adopt from the shelter and finally landing on Scrappy Doo.

No, not the same, dog but he more or less had the same look and more importantly he was not jumpy, but seemed calm cool and collected--as much as one can be for a stray--and in the five mins on our meet and greet.

Knowing dog ownership was fine but a head's up to the property manager--individual in charge of renting--yes, I will be getting someone so a phone call from the shelter may be eminent.

Sounds good was the e-mail reply.


Aware that the San Diego Animal Shelter on Gaines gets the go ahead from the landlord and feeling confident about filling out the paperwork and waiting for the okay to bring Scrappy home,,,,,,confident and ready with the leash in my purse.

Seems like it is fine with the property manager but somehow the HOA got involved and here they were quoting the rules.......yada, yada, yada pit bull and something about weight.

Wait--the landlord/property manager said I could get a dog--wanted one around the same build as Ronnie.

So, the HOA lady was not going to budge, I explained to her I already had the exact same dog, that is why I moved in--why are you quoting the rules to me now.   It was odd when she asked why I did not ask the landlord.

Talked with Tom, the property manager and he was totally on my side, could not understand the obstinance of the HOA.  Said he would get with the actual owner and have them ask for a waiver to the board per the HOA.

Went back to the shelter a week later just to see if Scrappy was still there and if the lady at the desk could shed any light on the situation as it seemed like something did not add up--I had no idea what.

Turns out they never would have called the HOA had Tom, the prop man not said, "It's fine with me but it is ultimately up to the HOA."

But Tom portrayed to me the Animal Shelter called the HOA on their own without his prompt.

So, of course, I asked him why did you rent to me in the first place.....that was the whole reason I moved in here?

Not to mention why did you indicate to me everything was fine when I said I was going to get another dog yet tell the shelter something different.

His response.  What do you want me to do.  Go to another shelter.

Guessing he was going on the deniable plausibility philosophy and that he was willing to rent as long as no one found out or said anything.

In his e-mail he said he was rooting for me when questioned after the first attempt.  He never mentioned he was the one who told them to call the HOA as he positioned himself as an individual totally on my side.

On the second attempt somehow the word "pit bull" went out of the conversation and the only issue seemed to be weight.

The second week sojourn ended with tom saying it was okay and not mentioning the HOA but the shelter said they still had to contact them as they originally became involved.

Now, here is the thing....I kind of like Scrappy Doo and have a little thing for him--I can't just ditch him after I tried to get him.

No, I do not know if he will be good with my cats.

You see I got Booker from the Escondido but unfortunately I had to take him back as he was overly interested in not only my cats, but the beautiful neighbor cat and every animal in sight.

He was extremely lovely to watch television with and loved kissing and snuggling--sad to take him back but he seemed like he really loved the girls at the Humane an awful lot.  He just loved kissing and baby talk.  He was a house dog and beautiful but it did not seem safe to ever leave him in the house with the cats.  Not feeling like that level of dog training expertise was in my repertoire.

And that is my story and I am sad.

I hope Scrappy gets the best home in the world as he has been at the shelter a while.  I think he is a pretty good dog--it's said he gets on well with others and here is his picture:

file under:  writing in frustration