So at the end of the day one has to ask why the Republican Party did not get on board with John Kasich sooner and in a big way.  Even though Ted Cruz is a gifted speaker he was always way too right to win in a general election.
John Kasich had a very good message and it is a loss for our country, repub or dem, that we are stuck now with someone who cannot stay in the truth and is being denounced by other world leaders, particularly the new mayor of London.
What does that say about us as a country?
Every day donald says a new stupid thing and that takes over the news.  At the end the GOP could have conducted in depth debates like the dems and Cruz, Kasich and donald--not so much--could have had serious discussions over policy.
We know what Hillary and Bernie think endlessly--we still do not know donald's ideas as he changes them daily.
When donald first started talking about rounding people up the repubs should have said you can run for President but not on our ticket as that is not what we stand for and also we are trying to make our group larger.
Instead, donald was a gift for ratings and the viewer is the loser with less information.
What John Kasich eats is really not news.
The other candidates could never say the things donald says because they are elected and have to represent their voters honestly.
This has not been an honest campaign by the news media.....the rest of the folks should have called donald out immediately when he started saying stupid stuff as Ted Cruz did at the end under no uncertain terms.
donald pulls the same stunt as Bill Maher did with Sarah Palin.  Once they go to a certain level with insults there is really no answer and CNN bought it hook line and sinker.
Not only the GOP should have an autopsy but cable news may want to look in the mirror, as well.
He endlessly said "lyin' Ted Cruz," but what about the discovered tape of him pretending to be a publicist yet he claims it was not him when it obviously was.
He called Ted's dad a conspirator in the JFK incident yet he is offended when the Wa Po looks into his background.
Then the most offensive thing of all is cable giving him the whole next day to deny his Ted Cruz-JFK statements but to still keep talking about it the whole time insisting he did not say it.  The damage was already done.  Really they should never have aired it in the first place.  Just a daily example of donald hijacking the media and them falling for it.
A monster unleashed......and now we have donald trump.
Chloelouise--Hillary girl forever

One week after ending his presidential bid, Governor John Kasich finds himself in the same position as many of his fellow Republicans, grappling with whether or not to endorse presumptive GOP nominee Donald Trump and, if so, how enthusiastically?
Regardless of how he answers the question, Kasich will still play a vital role in the presidential campaign as the still-popular governor of one of the most critical swing states this fall and also the host state for the party's convention this summer. And just how he squares his own campaign aspirations with the new reality won't go unnoticed.
For the last few months, Kasich avoided directly saying whether he would support Trump as the nominee, but after violence erupted at Trump's rallies in March, the governor told reporters that the front-runner "makes it very, extremely difficult." Kasich Drops Presidential Bid 1:21
The battle Kasich waged throughout his presidential campaign was one in which he repeatedly warned his party of the "two paths" before them — one based on his optimistic worldview, and the other belonging to Trump and Texas Sen. Ted Cruz. The path they offered, Kasich said, "solves nothing, demeans our history, weakens our country and cheapens each of us. It has but one beneficiary and that is to the politician who speaks of it."
The governor painted himself as a "well trod" and "solid" alternative, and called Trump's proposal to temporarily ban Muslims from entering the country "more of the outrageous divisiveness that characterizes his every breath and another reason why he is entirely unsuited to lead the United States."
Last Man Standing
Kasich was a later entry into a GOP field that was initially hailed for its load of political talent — names like Jeb Bush, Scott Walker and Marco Rubio. His frugal campaign largely skipped the Iowa caucuses, hunkered down in New Hampshire and eschewed the kind of massive fundraising operation other candidates had established.
But primary voters made clear which path they favored, delivering the nomination to Trump.
But at the end, Kasich got what he most wanted in the Republican primary race — to be the last candidate standing against Trump in the battle for the party's nomination, even if for just a few hours after Cruz suspended his campaign.
Kasich won just one state during the primary contest — his home state of Ohio — and lagged behind the front-runner in almost every poll, in almost every election result, and in every delegate count, never posing a considerable threat to win.
Even during the most contentious moments in the free-for-all battle between Trump and the non-Trump field, Trump rarely had to turn any fire or attention to Kasich, only granting him a nickname near the end that encapsulated how he never sensed a serious challenge. Trump dubbed him "1 for 38" or "1 for 41 Kasich."
Still, up until the moment he bid farewell, Kasich was the embodiment of the anti-Trump faction of the party, with a starkly different vision for America and a message of cooperation, inclusion and larger purpose. Sometimes it seemed as though Kasich was running in an entirely different election. 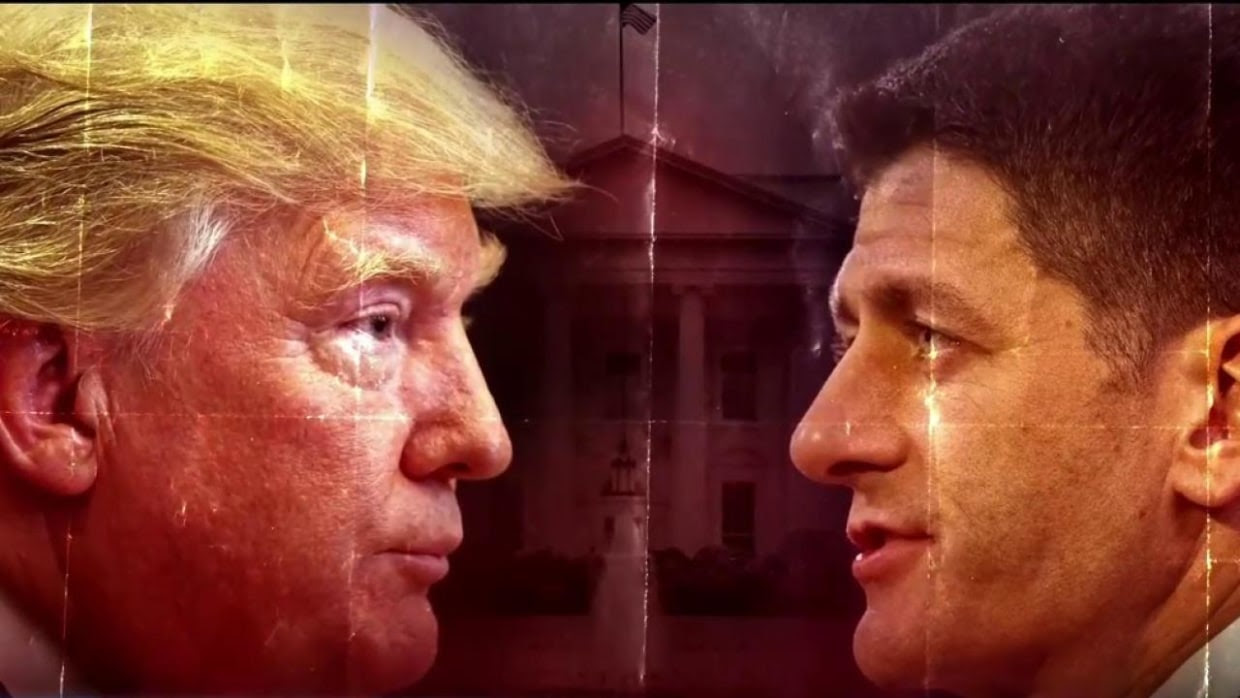 Speaker Ryan: Meeting With Trump Was 'Very Encouraging'4:01
A Different Vision
From the start, Kasich didn't engage his opponents, preferring to operate in an insulated sphere, speaking primarily about his own message and ignoring all the day-to-day squabbles. But as the field condensed and he was forced torepeatedly confront what was in the news or what was happening with his opponents, he began to feel as if his initial message got lost.
"The spirit — the essence of America — lies in the hearts and souls of us. You see, some missed this message," Kasich said as he suspended his campaign last Wednesday. "It wasn't sexy. It wasn't a great sound bite."
And it most certainly wasn't what Donald Trump was selling.
On the campaign trail, Trump drew hundreds or thousands of supporters who exhibited much of the same fervor the candidate displays at the podium. Trump railed against his opponents, against specific journalists, against figures in the news, and offered his take on whatever the television talk of the morning was.
In contrast, Kasich generally bragged about how he didn't like to pay attention to the news, regularly telling crowds he mostly watched "60 Minutes" and the Golf Channel. The governor's town halls grew larger and larger as the months wore on, but they were always smaller, more intimate affairs than the mega-rallies for Trump. Attendees sat down in chairs around him and politely listened as the governor encouraged his audience to find their "purpose" and "live a life bigger than yourself."
"When you listen and find your purpose, you are on fire," Kasich would say, like when he faced a town hall of students at Villanova University in Pennsylvania on March 16, the day after he won the Ohio primary. "And it's an unquenchable fire when you find it."
At Trump's rallies, the atmosphere was palpably charged with live television coverage and chants of "build the wall!" Protesters — and the reception they received — became a common storyline at those events.
Meanwhile, Kasich only seldom saw protesters, and used his folksy demeanor to stroll into events, regale his crowds with stories about life, wisdom, and balanced budgets, and delivered his version of compassionate conservatism.
"I'm raising the bar in American politics," he said in Strongsville, Ohio, two days before the state's primary. "Being an example and role model for our kids about the way in which you should conduct yourself." 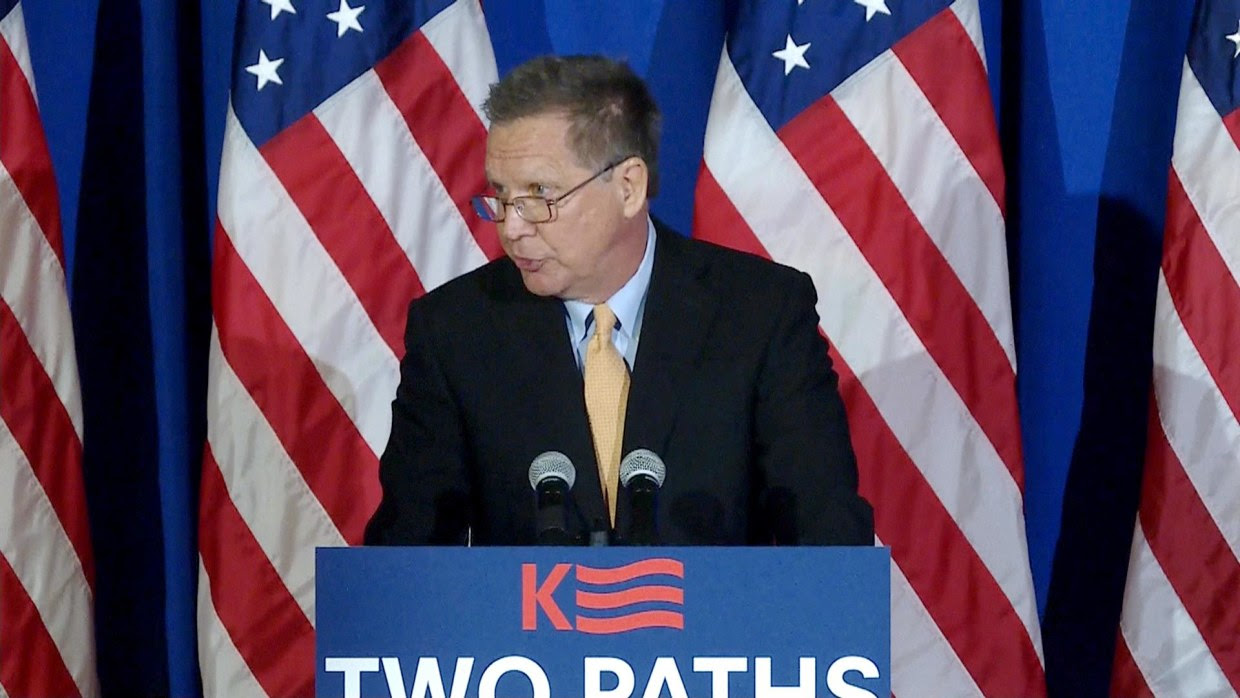 Republican Party split over Trump is made up 12:31
On that final Wednesday morning, Kasich and his aides boarded a private plane that was set to travel to Dulles Airport outside Washington, D.C., where he was set to talk with the press about the road ahead and attend a few days of fundraisers and meetings. They were on the plane and talking about the state of the campaign as the doors to the aircraft closed.
Ultimately, before the plane ever moved, Kasich got off the plane and scrubbed the flight. He met with a close group of his team members inside a conference room, where sources say they continued to discuss his place in the race and why the campaign was still pushing forward.
The governor doesn't do well with a message that he doesn't believe in, the sources said, and he did not want to travel and spend days asking people for more money when he did not see a plausible scenario or clear path ahead and could likely drop out a few weeks later.
The next two states in the primary calendar, West Virginia and Nebraska, posed considerable challenges, and Kasich's staff knew they would likely get "blown out of the water" there. Multiple sources in Kasich's campaign, however, said that it's likely they could have continued on if the next states to vote were places like Oregon or California — more favorable terrain.
Kasich's aides offered their input about whether he should stay in, but the decision to suspend the campaign was ultimately up to the governor.
"Throughout my campaign, I have said the Lord may have another purpose for me," Kasich said as his campaign came to a close that evening.
"And it sent all the pundits a-Twitter: Does that mean he's not committed, or he's not focused, or he's not energetic? It showed to some degree how little they understand about life," Kasich said.
"I have always said that the Lord has a purpose for me as he has for everyone. And as I suspend my campaign today, I have renewed faith, deeper faith, that the Lord will show me the way forward and fulfill the purpose of my life."
NBC News' Peter Alexander contributed to this report.
Posted by Chloelouise at 7:29 AM