Rove on Trump: Dunking the donald 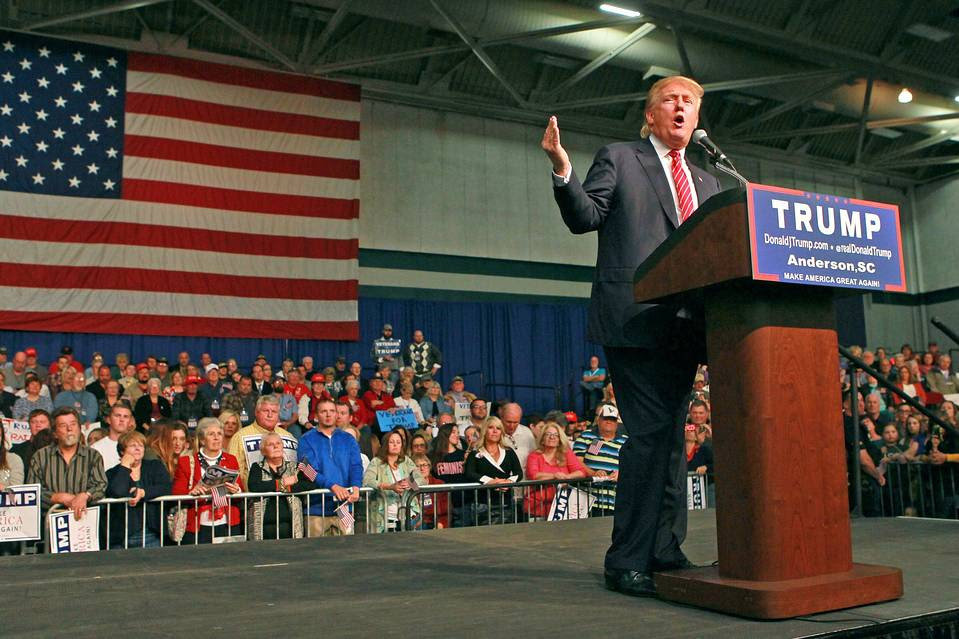 ENLARGE
Republican presidential hopeful Donald Trump campaigning Oct. 19 in Anderson, S.C. PHOTO: KEN RUINARD/ASSOCIATED PRESS
By
KARL ROVE
Oct. 21, 2015 6:42 p.m. ET
153 COMMENTS
Having led the polls for three months, Donald Trump has shown he’s no flash in the pan. Voters and the media should therefore treat him as a traditional front-runner, examine his temperament and require him to go beyond sound bites.
A governing agenda is essential to win the White House. Candidates must demonstrate mastery of the issues and cannot wing it. Platitudes don’t cut it for swing voters. Inquiring minds might like to hear Mr. Trump explain what specifically he would do as president.
He has said that he would deport the estimated 11 million illegal immigrants living in the U.S., and in two years or less, thanks to “really good management.” But what exactly is Mr. Trump’s plan to arrest, detain and deport—with all the litigation that entails—15,000 people a day? That’s roughly 10 times the number of daily arrests in the U.S. for violent crime. How will Mr. Trump round up these people in a way that is, as he promises, “very humane” and “very nice”? And how many tens of billions will this cost?
Mr. Trump says he will then “expedite” the return of “the good ones” and proclaims that he doesn’t mind “having a big beautiful door” in his border wall to hasten their return. Question: Wouldn’t it be more practical to identify the “good” illegal immigrants first, to thereby avoid the cost of deporting them merely to expedite their return? Wouldn’t it be easier to determine who qualifies as “good” before deportation?
Then there’s the billionaire hotelier’s pledge to build that wall on the southern border. Mr. Trump has neither said how much it would cost nor dealt with practical considerations. For example, would Mr. Trump build a wall along the 1,254 miles where the Rio Grande separates Texas and Mexico? Would he wall off Lake Amistad and Falcon Lake, two reservoirs straddling the border where Americans go fishing and boating? What would he say to Texas officials who, instead of a wall along most of the Rio Grande border, would prefer to spend money on more Border Patrol agents, air assets and technology?
He is similarly vague on health care. In a Sept. 27 interview on “60 Minutes,” he said health care should be a universal, government-provided right. “Everybody’s got to be covered,” he said. “I don’t care if it costs me votes or not.” When the interviewer asked how, and who would pay for it, Mr. Trump answered, “I would make a deal with existing hospitals to take care of people,” and pledged that “the government’s gonna pay for it.” During the Aug. 6 GOP debate Mr. Trump praised socialized medical systems elsewhere. “As far as single payer, it works in Canada,” he said. “It works incredibly well in Scotland.”
So how would TrumpCare operate? How many Americans would be eligible? What would it cost? It isn’t enough for Mr. Trump to go on “60 Minutes” and claim, “They can have their doctors, they can have plans, they can have everything.” Americans have heard empty promises before. They want an actual proposal that works.
There are already huge gaps between what Mr. Trump says and reality. For instance, he has complained about “hedge fund guys that are making a lot of money that aren’t paying anything” in taxes. Yet when he released his tax plan, he proposed dropping the top rate on hedge fund fees to 25% from 39.6%. True, the plan would raise taxes on their performance bonuses to 25% from 23.8%. But the result would be a generous tax cut provided to people Mr. Trump claims pay no taxes despite “making a hell of a lot of money.”
What about entitlements? “I’m not going to cut Social Security like every other Republican,” Mr. Trump says. “And I’m not going to cut Medicare.” But the Social Security Trust Fund will go bankrupt by 2034, and the Medicare Hospital Insurance Trust Fund will be exhausted in 2030. The only way the next president can save these entitlements is to reform them and help America avoid a debt crisis.
Mr. Trump has proven he can do outrageous. But soon Mr. Trump must demonstrate that which he has so far avoided: substance.
Republicans, too, face a test: Will the party choose a nominee with a conservative agenda or one reflecting populist anger? The two are hardly the same. Conservative principles provide a winning path to the White House. Populist outrage alone will end in defeat. In three months, Republican primary voters will begin deciding which they want. A good start would be to demand more from The Donald.
Mr. Rove helped organize the political-action committee American Crossroads and is the author of “The Triumph of William McKinley: Why the 1896 Election Still Matters,” out in November from Simon & Schuster.

Posted by Chloelouise at 10:24 AM No comments:

Kingfisher
Posted by Chloelouise at 8:22 AM No comments: