the end of the road for donald trump

Posted by:
The Province

RECENT POSTS FROM THIS AUTHOR

Many years ago, when The Apprentice was a relatively new phenomenon and the contestants were ordinary Americans and not celebrities, each season would invariably include at least one outrageous candidate who had little business being in the executive suite of any serious company, screwed up one task after another in glorious fashion and antagonized and insulted opponents with colourful language.
That applicant typically had the lowest chance of winning but was never the first to be fired by Donald Trump. The host would find some justification to keep the incompetent candidate around for a few weeks, purely to make the show more entertaining.
Ultimately, however, when things got serious and only a few contestants remained, the joker would be dumped and Trump would choose his apprentice from among the most capable aspirants.
And that’s exactly how Republicans are treating Trump himself as he turns from host to candidate and pursues the party’s presidential nomination. At this juncture of the political reality show, there are no big decisions to be made. So why not keep around the boorish, offensive, clearly unqualified candidate for the time being for the entertainment value, even if he’s never going to get the job?
Nobody is consciously responding to pollsters with the deliberate intent of propping up Trump’s campaign for sheer enjoyment. But neither are many of the one in five Americans who are currently saying Trump is their first choice seriously considering voting for him in the end. It’s way too early for that. They’re just saying, “Let’s see where this goes.”
In the end, when real choices have to be made about who will carry the banner of the party of Abraham Lincoln, Theodore Roosevelt and Ronald Reagan, the voters will look somewhere else.
So let’s stop treating his candidacy as surprisingly legitimate because of a few early polls, as too many pundits are doing. Even those who dismiss his long-term chances are dissecting the lessons from his early success, principally that despite his abundant flaws, he offers the authenticity that Americans crave from their leaders.
Far from being authentic, Trump is probably the most contrived presidential candidate in history. Politicians are often accused of living in bubbles, out of touch with the real world. But by the nature of their jobs and their backgrounds they are forced to confront reality far more often than the multibillionaire purveyor of a luxury brand who lives in a gold-plated penthouse, exaggerates his net worth and thinks the answer to everything is to outshout his detractors and call them losers.
These days, Trump is as much a television character as an entrepreneur; the only difference between him and any other prime-time star is that he plays exactly the same role off the air and has been doing it for so long he’s forgotten the distinction between real life and fiction.
That’s not authenticity, it’s self-delusion.
What observers describe as authenticity is simply shtick: Trump insults others, demonizes convenient enemies and offers simplistic solutions. That’s not leadership; it’s crude ideology masquerading as honesty. It plays to the small segment of Americans who want someone to tell it like it is on issues like immigration — not how it actually is, of course, which is incredibly complex, but how they wish it to be: as simple as building a wall to solve all of America’s problems.
As the producer and host of a reality show, Trump should realize where he stands. But since he’s utterly oblivious and also on a bit of a roll, he is charging ahead in complete ignorance. When Trump is finally confronted with his fate, we could be treated to the equivalent of a final tribal council meltdown on Survivor or the teary-yet-defiant marches out of the American Idol audition hall.
“You haven’t seen the last of me,” he’ll say, like the off-key would-be pop singer with dreams beyond his talent.
Then he’ll probably launch a third-party candidacy that might just take enough support away from the Republicans to hand the Democrats the White House. Trump’s only authentic feature is his boundless self-obsession.

Posted by Chloelouise at 8:36 PM No comments: 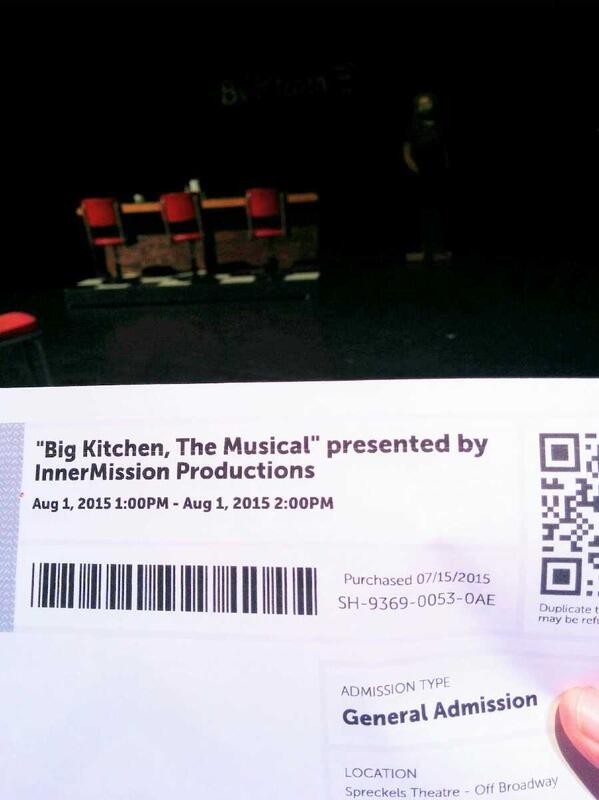 Looking forward to the show! Today is sold out but check for other times. "Judy the Beauty" is here!

Presented by InnerMission Productions
Big Kitchen - A Counter Culture Musical is an evolving production about former Detroit social worker Judy Forman - aka Judy the beauty on duty – and the inclusive community she has fostered at her eclectic Southern California restaurant. Since 1980 Judy and the BK have been the center of the world for artists, musicians, gays and lesbians, political activists, hungry people and seekers of all kinds.
This performance features an hour of the full-length show, with book by Robert Schleeter and Corey Fayman (with Judy Forman!) and music by long-time collaborators Robert Schleeter and Ricardo Pitts-Wiley.
Join InnerMission Productions and celebrate this work-in-progress as it’s brought to life by a large and wonderful local cast, led by Director Carla Nell. And keep an eye on this show, because it’s going places!
Support the Arts Full-Price: $10.00
ArtsTix price: $5.00 (available day of show)
IMPORTANT: A FRINGE TAG IS REQUIRED as your pass for 11 Days of Eyeball Busting Shows. This one-time $5 purchase supports the festival, because 100% of ticket sales go directly to the performing artists. You can purchase Fringe Tags HERE, or you can purchase tags at ANY venue, prior to attending your first show.

Posted by Chloelouise at 4:07 PM No comments: