Trump And Sanders, The Disrupter Brothers

The noisy challengers won’t win, but they will complicate the campaign for their party rivals.

Democratic and Republican presidential hopefuls are facing challenges from two candidates who draw on the populist wings of their parties.

Mr. Sanders has gained about 250,000 donors and turned out huge crowds in Iowa, Wisconsin, Maine and New Hampshire. Since launching his campaign on May 26, he has cut Hillary Clinton’s lead in Iowa to 34 points from 51 and her margin in New Hampshire to 16 from 37, according to poll averages by Real Clear Politics.

For Republicans, the challenge is television personality and hotelier Donald J. Trump. Mr. Trump is hardly a die-hard conservative, having donated $314,300 to Democrats (including Sens. Harry Reid and Hillary Clinton) and $290,600 to Republicans between 1989 and 2010, as the Daily Caller reports. But his message is aimed at conservative populists.

These are people who believe the country is going down the tubes and are angry that the GOP hasn’t stopped President Obama. Mr. Trump’s promise to build a wall on the southern border and send Mexico the bill has helped his poll numbers. So has telling the Chinese to go to hell on trade. Mr. Trump’s rise, to 6.5% in the Real Clear Politics average, comes at the expense of others competing for the same space, including neurosurgeon Ben Carson, Sen. Ted Cruz and Gov. Scott Walker. None of them is as blunt and outrageous in tapping into resentment as Mr. Trump.

Both of these new populist champions are planning to hang around. Mr. Sanders, an ideological true-believer, wants to drag his party further left. Mr. Trump wants to draw attention and become a political force. It will be interesting to see how other White House hopefuls handle these disruptive intraparty rivals.

So far Mrs. Clinton is dealing with Mr. Sanders’s challenge by moving left. She is attempting to make herself indistinguishable from him ideologically, even at the risk of looking inauthentic and cynical—as she does when attacking hedge-fund managers while playing down her and her husband’s long and lucrative relationship with Wall Street. Mr. Sanders could also pull her so far left in the primaries as to create openings for Republicans to exploit in the general election.

Mrs. Clinton recognizes that Mr. Sanders may win early states like Iowa that include a fervent hard-left element. But she’s counting on her fundraising advantage and stronger national organization to grind the senator down over time.

The response of GOP candidates to Mr. Trump should be guided by the June 23 Fox News Poll showing that 64% of Republicans, 69% of conservatives and 55% of tea party members consider his candidacy a sideshow. An analyst at the FiveThirtyEight website pointed out that Mr. Trump has the worst favorable/unfavorable ratings of 106 presidential candidates since 1980, worse than even Al Sharpton and Jesse Jackson. Mr. Trump is disliked by 57% of his own party.

If asked about his extreme statements, Mr. Trump’s Republican competitors have two options: They can gingerly applaud the feisty casino magnate, hoping to eventually inherit his supporters while trying to avoid responsibility for what he says.

Or they can disagree with Mr. Trump by emphasizing their own views and distance themselves, respectfully, while trying not to use his name. When Mr. Trump is wrong, this is the better course—but be prepared: He responds with insults. He feeds on controversy.

He has called the rest of the candidates in the GOP field “clowns”; tweeted that Rick Perry “needs a new pair of glasses to see the crimes committed by illegal immigrants”; and retweeted a follower who wrote that Jeb Bush “has to like the Mexican Illegals because of his wife.”

When I raised questions about his seriousness, Mr. Trump tweeted that I had “spent $430 million in the last cycle and didn’t win one race.” (In 2010, he donated $50,000 to the Crossroads political-action organizations for which I volunteer.) In the 2014 cycle, Crossroads groups spent $103 million to help win 10 of 12 targeted U.S. Senate seats and 10 of 13 competitive House seats. Not that facts matter much to The Donald.

Mr. Trump could become the 2016 version of Missouri Rep. Todd Akin, who tarnished the GOP brand in 2012 with an offensive statement about rape. Republican leaders from Mitt Romney on down immediately condemned his words, but swing voters were persuaded that every Republican believed what Mr. Akin said.

Mr. Sanders and Mr. Trump won’t win their party’s nomination. But in trying, they could make the path to the White House that much rockier for whoever eventually does.

A version of this article appeared July 9, 2015, in the U.S. edition of The Wall Street Journal, with the headline Trump And Sanders, The Disrupter Brothers and online at WSJ.com.
Posted by Chloelouise at 10:17 AM No comments:

Donald Trump: I'm going to go ahead and give the election to Hillary Clinton........

Trump: A joker in the GOP's presidential deck 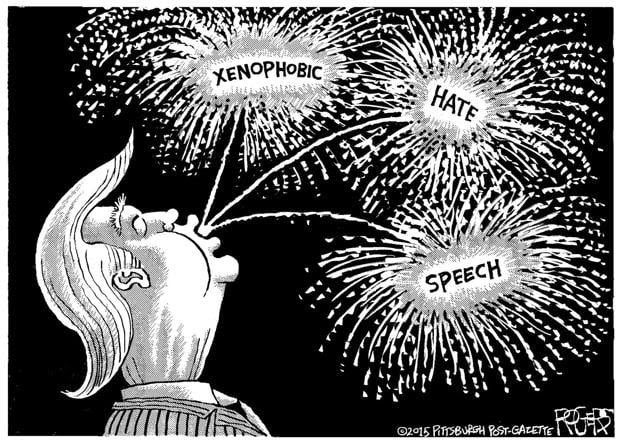 Buy Now
"Some people," as Barry Switzer famously declared (rather oddly for a football coach), "are born on third base and go through life thinking they hit a triple." And then there's Donald Trump.
Inheriting a $250 million fortune built by his father on government loans and housing contracts, Trump fell close to the family's corporate welfare tree. He now claims a net worth in the billions and cultivates the myth that he is a "self-made man."
His version of the story doesn't mention the government subsidies, the "too big to fail" debt (continually restructured by bankers who feared going down with him if he defaulted) or the multiple business bankruptcies.
So there stands The Donald on third base, hamming it up for the cameras and periodically awarding himself MVP trophies. Home plate, he's now decided, is the White House.
I have to hand it to the guy. Anyone who can go bust four times running casinos — casinos, for the love of Pete! — then suggest, with a straight face, that he's the man to bring fiscal responsibility and business acumen to Washington, deserves credit for sheer chutzpah.
Perhaps his descent into xenophobic rant is an attempt to distract attention from the weak "self-made man" narrative. Or maybe he's a Democratic mole. Either way, he's bad news for Republican prospects in 2016 and beyond.
Trump's claim that a disproportionate percentage of Mexican immigrants are "criminals, drug dealers, rapists, etc." seems custom crafted to cost the Republican ticket double digit vote percentages.
The first problem with his assertion is that it's flatly false. As syndicated columnist Steve Chapman points out in Reason magazine, Mexican immigrant populations in the U.S. correlate to lower, not higher, violent crime rates. "If Trump wants to avoid rapists, here's some advice: Head for areas with lots of residents who were born in Mexico."
The second problem is that he's throwing a bomb, fuse lit and hissing, into the GOP's attempt to solve its voter demographic problem. White males (the party's "base") are a shrinking proportion of the electorate. Hispanic voters, on the other hand, are growing in number.
Smart Republicans understand this. At least three candidates — Marco Rubio, Ted Cruz and Jeb Bush — hope to move in at 1600 Pennsylvania Ave. on the strength of significant Hispanic support.
There's a tightrope between the GOP's opportunistic devolution into Know-Nothingism since the days of Reagan and George H.W. Bush (who competed in 1980 for the title of "most open borders candidate") and an appeal to immigrant voters and their families.
And there's Trump, doing unicycle stunts on the tightrope, jostling the other performers' elbows, forcing the PR choice between supporting him, slamming him or trying to ignore him. It's a long way down and the ground below is very hard. Choose carefully.
The Republican Party has two possible political futures: In one, it gets libertarian on immigration. In the other it gives up its hopes for the White House not just in 2016, but for the foreseeable future.
Thomas L. Knapp is director and senior news analyst at the William Lloyd Garrison Center for Libertarian Advocacy Journalism (thegarrisoncenter.org).

Thanks, Thomas, for giving us the facts on the Donald.

Posted by Chloelouise at 9:52 AM No comments: