June 17 at 2:58pm · Edited ·
The Rolling Stones are playing in Nashville tonight.
I hope they'll dedicate the show to Bobby - and spare a thought for his children Amber and Huck.
It's interesting how Bobby and I entered the band at the same time, when we were called in to record 'Live With Me' in May 1969. We were both out of favour with them for a number of years, and even lived and worked together in Miami in the 90s. He was meant to do the postponed dates in Australia/NZ with us for the 14 On Fire tour, but sadly he didn't make it to Adelaide. Unfortunately it would also turn out to be my last time going on the road with the band.
I think this is a wonderful photograph of Bobby Keys. Alan Messer took this in April 2011, backstage at the Mercy Lounge in Nashville.

copied from the facebook page of Mick Taylor
and here is a link to that page:

Posted by Chloelouise at 11:12 AM No comments:

The torture-murder of a corrupt and kinky city official threatens to derail a lucrative land scheme in “The Western Book of the Dead” (Episode 201), the Season 2 premiere of HBO’s “True Detective.”
This eight-part anthology series, written and created by Nic Pizzolatto, is set in fictional Vinci, a small industrial city south of downtown Los Angeles.
Living and working in this grimy landscape is Ray Velcoro (Colin Farrell), a divorced, burned-out detective serving two masters.
'True Detective' setting based on California city with a corrupt past
Ray draws his salary from a rotten-to-the-core administration headed by Mayor Austin Chessani (Ritchie Coster). And Frank Semyon (Vince Vaughn), a career criminal aiming to become a legitimate entrepreneur, controls Ray behind the scenes.
This manipulation includes ordering Ray to pummel newspaper reporter Dan Howser (Stevin Knight) after he writes an expose on exorbitant salaries, extortionary tactics and other dirty dealings at Vinci City Hall.
Frank has risked his ill-gotten wealth on vacant property adjacent to the California Central Rail Corridor, a massive transportation project budgeted at $68 billion. Government grants will support commercial developments along the route, Frank emphasizes at a presentation, “and the feds have guaranteed cost overages.”
lRelated 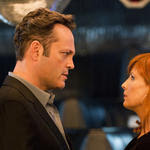 TELEVISION
The TV we deserve? 'True Detective' season 2 and the age of microcriticism

SEE ALL RELATED
8
In other words, a taxpayer-funded gravy train is speeding toward Vinci.
Frank’s grand ambitions are jeopardized, however, when the mutilated corpse of his business partner -- City Manager Ben Caspere -- is discovered. Ben’s eyes were burned away with acid and he bled out from a severe pelvic wound.
Compounding Frank’s anxiety is the reluctance of a presumed investor, European mobster Osip Agronov (Timothy V. Murphy), to finalize a critical land deal.
“I thought we already had an agreement,” Frank protests, trying to mask his desperation.
cComments
Got something to say? Start the conversation and be the first to comment.
ADD A COMMENT
0
“You know you have my complete confidence,” Osip replies. “But our organization has very old rules. Checks and balances. I have to perform my due diligence.”
Ray, meanwhile, is assigned by his superiors -- Police Chief Holloway (Afemo Omilami) and Lt. Kevin Burris (James Frain) -- to investigate but perhaps not solve the city manager case. Despite Ray’s objections, he is partnered with sleazy Det. Teague Dixon (W. Earl Brown).
When they enter Ben’s ransacked home, Ray and Teague realize a computer is missing but see there’s no shortage of erotic art and sex toys.
“I had no idea he was so ... adventurous,” Teague observes.
Because the victim’s body was dumped in Ventura County, Ani Bezzerides (Rachel McAdams), a Sheriff’s Department detective, is put in charge of the probe. And unlike the Vinci Police Department, Ani wants to figure out who killed the city official and why.
Just like most characters on “True Detective,” Ani is beset with personal problems. Besides being a heavy drinker and gambler who’s unable to form long-term relationships, Ani is mad at the world and suffers from a false sense of entitlement. This according to her estranged father (David Morse), a long-haired religious guru.
Ani’s rebellious sister Athena (Leven Rambin) also has issues. Athena kicked her drug habit, apparently, but now she’s involved in the online porn business, performing live sex acts via webcams for paid subscribers.
The final member of the murder investigation team is Paul Woodrugh (Taylor Kitsch), an emotionally and physically scarred motorcycle officer with the California Highway Patrol. Paul found Ben’s body at a rest stop.
This lurid homicide case provides a chance for Paul to redeem himself after being accused of accepting sexual favors from a headline-seeking actress, Lacey Lindel (Ashley Hinshaw), in exchange for not issuing her a reckless driving citation.
But Paul would much rather patrol Pacific Coast Highway than collaborate with detectives.
“It suits me,” Paul says of his adrenalin-inducing motorcycle duties. “I am no good on the sidelines.”

copied from the LA Times

Posted by Chloelouise at 8:33 AM No comments: