John Kasich: Takes Out Trump Two Times--We should be glad

Thanks to John Kasich and the donald himself the ridiculous scenario of trumps immigration plan has been exposed.  Twice now in a debate john Kasich has called out donald on his stupid ideas of deporting Hispanics.  Then trump went on about the Ike idea of deportation--one that every single news agency has said was horrific and inhumane.

This is important because donald trump and ben carson are an American embarrassment.  Their ideas do not fit with the coat of many colors values that have existed in our country since the beginning.

On the more practical side this theory cannot win a general election.  John Kasich has been quoted all over the news channels for his comments against trump particularly from the practical point of view.

I think we have to give him credit given the backlash he must have known that would be coming from donald--notice this time trump did not have much to say in his words against kasich.

Joshn Kasich is more or less normal and has a good track record--who else on the Republican debate stage has those credentials....possibly Jeb Bush.

If John Kasich plays his card right and lets Bush's superpac take out Rubio with high powered ads one cannot see why he does not have a pretty good chance.

What would be wrong with a ticket like John Kasich/Nicky Haley?

I just do not understand why the GOP has to veer so far from normal and then wonder why they do not win a race.

Seriously, my girl Hillary will win and I should not even be talking about Kasich but the likes of donald trump and ben carson are disgusting.

America should be glad he took the leadership role and stopped them in their tracks.

I, for one, as a US citizen appreciate it. 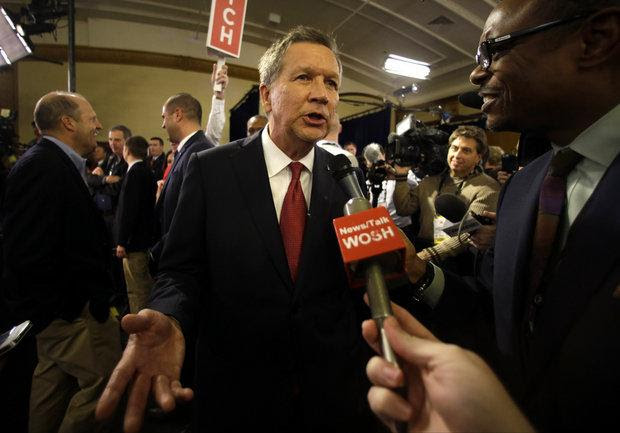 Depending on which pundit you believe, Ohio Gov. John Kasich, here talking with reporters in the spin room Tuesday night after the Republican presidential debate in Milwaukee, was either the most important candidate on stage or is fading fast. (Jeffrey Phelps, The Associated Press)
PrintEmail

By Robert Higgs, cleveland.com Columbus bureau chief
Email the author | Follow on Twitter
on November 11, 2015 at 2:20 PM, updated November 11, 2015 at 3:26 PM
Today's John Kasich news: Ohio Gov. John Kasich didn't get rave reviews for his performance Tuesday in the GOP presidential debate in Milwaukee, but one columnist speculates that he might have been the most important person on stage.
Kasich's presence among the GOP presidential hopefuls, and his performance, could go a long way toward shaping the field over the long haul, writes James Poulos of The Week.
"According to the fast-forming conventional wisdom, the longshot candidate was one of the bigger losers of the debate," Poulos wrote Wednesday. "But his influence on the field, already outsized, hit a fresh high."
Kasich's message could very well make the difference in make-or-break New Hampshire, home of the first Republican presidential primary in 2016.
"Kasich had but one strategic objective yesterday night: to show (Jeb) Bush voters what a real fire in the belly looks like," Poulos wrote. "Sure, he took it too far for rightwing populists, raining derision on Donald Trump and other immigration hawks. But in New Hampshire, which Bush is treating like a must-win, the Kasich we saw last night is likely to play much differently."
The result could vault Kasich into a three-way contest for the nomination.
Read the full column at The Week.
FiveThirtyEightPolitics editor Nate Silver had a different take on Kasich's debate performance and evaluated the case for the governor as a presidential candidate.
He's fairly moderate, but no more moderate than Jeb Bush, Silver posted to his site Wednesday. "He's a fresher face than Bush. And his campaigning muscles are more in shape, since he was elected and re-elected easily in Ohio in 2010 and 2014."
But Silver questions if Kasich has peaked and may in fact be fading as he presents his campaign as the more-moderate alternative.
"I'd thought that Kasich might be engaged in an elaborate tactical bank shot. First, get on the radar screen by any means necessary," Silver wrote. "But part two of the strategy, I'd assumed, would be a pivot — once he had found his footing, he would move back to the right."
Read Silver's full assessment at FiveThirtyEightPolitics.