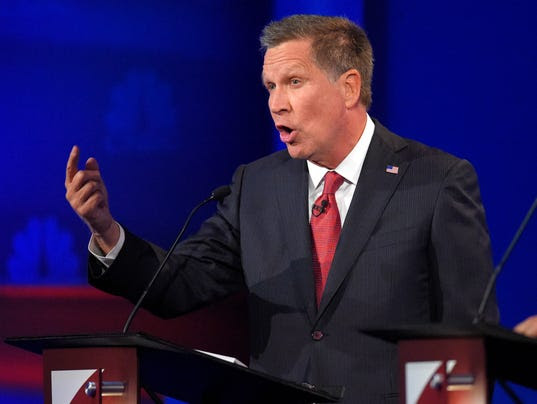 (Photo: AP Photo/Mark J. Terrill)
BOULDER, Colo. - John Kasich set an aggressive tone early in Wednesday's GOP debate, drawing a swift attack from frontrunner Donald Trump, but then quieted for some of the night.
Still, the Ohio governor finished third in talking time,as measured by National Public Radio -- a vast improvement from his quiet debate performance last month, which kicked off six weeks of falling poll numbers and lukewarm fundraising.
And compared to establishment rival Jeb Bush's showing, Kasich excelled -- helping the Ohio governor with his argument that he, not Bush, is the field's serious elder statesman. 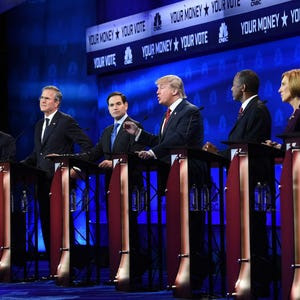 USA TODAY
Republican candidates go after one another — and the media
'Great question, but...'
Kasich opened the debate with the night's first question, which he promptly ignored -- setting up an early volley of attacks and interruptions.
“Great question," Kasich said when he was asked about his greatest weakness. "But I want to tell you, my great concern is that we are on the verge, perhaps, of picking someone who cannot do this job.” And on he went, as he had forecast he would. No more steering clear of criticizing GOP rivals. The old Kasich had returned, aggressive and sometimes impolite.
Right away, Kasich started interrupting the moderators to try to get more talking time. At times, his voice, Trump's and even Bush's clashed with the CNBC moderators' ineffective attempts to control the 10 GOP candidates in the main debate.
"I want to comment on this. This is the fantasy that I talked about in the beginning," Kasich said, following Ben Carson's comments about his flat-tax plan. And CNBC moderators obliged, asking Kasich about the tone-changing rant he made Tuesday before heading to Colorado for the debate.
“Folks, we gotta wake up," Kasich said, touting his experience helping to balance the federal budget in Congress and focusing on the economy as Ohio's 63-year-old governor. "You gotta pick somebody who has experience, somebody who has the know-how and the discipline.” 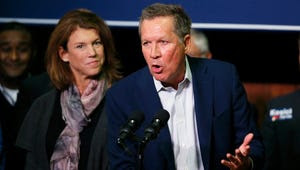 CINCINNATI.COM
John Kasich needs a good debate -- and his outburst shows he knows it
Kasich's critique called out Trump. The billionaire frontrunner, after months of avoiding criticism of Kasich, fired back.
“John got lucky with a thing called 'fracking.' OK? He hit oil," Trump said of Ohio's economic recovery, even though the Buckeye State's burgeoning oil and gas industryhasn't provided an outsized boost in employment.
Then, Trump put part of the blame for Lehman Brothers' bankruptcy on Kasich, who worked in a small Ohio office for the Wall Street firm before the recession. Again, Trump spoke erroneously, saying incorrectly that Kasich sat on the bank's board. The Ohio governor protested both of Trump's points.
“He was such a nice guy. And he said, 'Oh, I'm never going to attack.' But then his poll numbers tanked," Trump said of Kasich. "That’s why he’s on the end.” 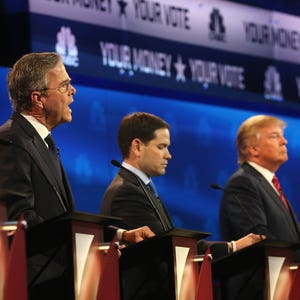 USA TODAY
Analysis: A new and rougher phase in the GOP debate
Bush's bad night
Bush, on the other hand, didn't draw many attacks. But then, candidates didn't need to focus on him. His 6 minutes and 39 seconds of talking time in the two-hour debate ranked second to last, topping only Kentucky Sen. Rand Paul's six minutes and 15 seconds.
The former Florida governor set out interrupting, as Kasich did, but struggled to break through. He used an early opportunity to criticize fellow Floridian Marco Rubio for missing votes in the U.S. Senate, suggesting that Rubio -- a former protege -- either show up to work or resign. "What is it, like a French work week? You get, like, three days where you have to show up?" Bush said to laughter.
But Rubio's response made Bush look foolish. He said Bush didn't complain when Sen. John McCain missed votes during his 2008 presidential bid: "The only reason that you're doing it now," Rubio said, "is we're running for the same position, and someone has convinced you that attacking me is going to help you."
Later, CNBC's Carl Quintanilla asked Bush whether the government should regulate daily fantasy sports as gambling. Bush started by boasting: "I'm 7-0 in my fantasy football league."
But New Jersey Gov. Chris Christie, not Bush, capitalized on the question. Christie jumped in after Bush's answer, hammering Quintanilla for not focusing his question on bigger issues. "We have $19 trillion in debt, we have people out of work, we have ISIS and Al-Qaeda attacking us, and we're talking about fantasy football?" Christie scolded. "Let people play. Who cares?"

ONPOLITICS
Six takeaways from the GOP Colorado debate
Was it enough?
Through much of the debate's second hour, Kasich was quiet, abandoning the tactic of butting in. That he avoided yelling to interrupt throughout the debate could help him avoid some of the "jerk" reputation that at times has dogged his vintage Kasich moments.
After hammering his budget and economic expertise in the first half of the debate, Kasich took a few opportunities near the end of the two hours to talk about some of the ideals he says drive his candidacy -- unity, healing and "living a life bigger than yourself." He got the debate's last word, punctuating it with a podium slap that said: Success.
But was it all enough?
Kasich's talking time -- 9 minutes and 42 seconds -- helped get his message out. He ranked fifth among the 10 candidates in Google searches. His exchange with Trump gave him the night's biggest Google boost.
With the next GOP debate less than two weeks away, Kasich needs all the national name-recognition help he can get. He's polling at about 2.5 percent nationally -- exactly the cutoff for making the main debate stage.
Despite all Kasich's progress, Rubio, not the Ohio governor, ranked first in Google searches Wednesday night. The Florida senator is the top-polling experienced politician in the GOP race nationally and in Iowa, a standing cemented by Bush's poor showing Wednesday.
Kasich needs to make the next debate. He needs more chances to spread his message. He needs the message to click with voters.
"We drove it to an issue discussion as opposed to a discussion of fanciful ideas," Kasich adviser and New Hampshire politico Tom Rath said. Voters, especially in early-primary New Hampshire, "are worried about real things. They don't like the pie-in-the-sky. They want people to be practical and solution-oriented, and I think he learned that.
"The stuff that we wanted to do, we did. I mean, no one's going to run away and say, 'You know, I was wrong. Let's just give it to Kasich.' But in terms of stating that rational case for the candidacy, I think he did a good job."

Posted by Chloelouise at 9:33 AM