Dr. Zhivago Will Always Be My Movie: RIP Omar Sharif 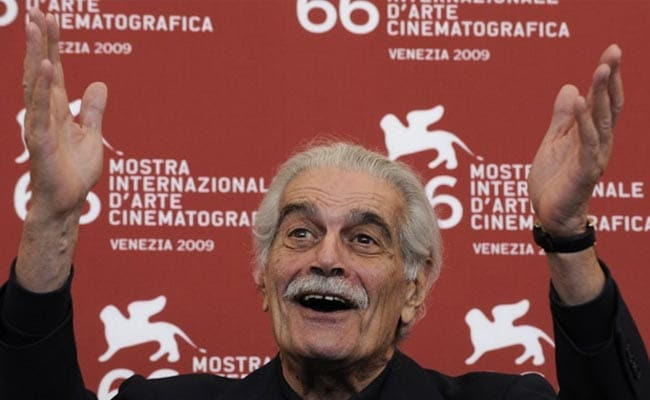 File photo: Egyptian film legend Omar Sharif poses during the photocall of "Al Mosafer" (The Traveller) at the Venice film festival. (Agence France-Presse)
CAIRO:  Egyptian-born film legend Omar Sharif, who has died aged 83, captivated audiences worldwide for more than half a century, but will forever be remembered as the eponymous "Doctor Zhivago".
Known for his debonair style, raffish good looks and often mischievous joie de vivre, Sharif, who also gained worldwide fame as a bridge player, had Alzheimer's disease.
He died of a heart attack, his agent Steve Kenis said in London.

Sharif began acting in the 1950s and his most high-profile roles were in the 1960s when he won an Oscar nomination for "Lawrence of Arabia" and Golden Globes for the same film and for "Doctor Zhivago".
His role in "Lawrence of Arabia" as Sharif Ali, an Arab chief enlisted by Peter O'Toole's T.E. Lawrence in Britain's fight against the Turks in World War I, propelled him to stardom, setting the stage for an even higher profile role in David Lean's subsequent release, "Doctor Zhivago".
Sharif played the hero in the epic adaptation of Boris Pasternak's novel of tortured passions during the Russian Revolution, with his real-life son Tarek playing his younger self.
The actor, fluent in Arabic, English, French, Greek, Italian and Spanish, went on to star in many films and television productions, including alongside Barbra Streisand in 1968's "Funny Girl".
But he never again scaled the heights of critical acclaim as in his work with Lean.
Sharif kept working over the following decades, often in television movies, and in later years became equally renowned for his prowess as a bridge player and owner of thoroughbred racehorses.
- Venice best actor award -
He co-wrote a syndicated bridge newspaper column in the 1970s and 80s, and wrote several books and licensed his name to the computer game "Omar Sharif Bridge".
"I'd rather be playing bridge than making a bad movie," he once said, before saying in 2006 that he had given up the game.
Sharif made something of a comeback in 2003 in the title role of the French film "Monsieur Ibrahim", playing an elderly Muslim shopkeeper.
The performance won him a best actor award at the Venice Film Festival and the best actor Cesar, France's equivalent of an Oscar.
In his later years he continued making movies and television films, including "I forgot to Tell You" in 2009 and "Rock the Casbah" in 2013.
Born Michel Demitri Shalhoub on April 10, 1932 in the Egyptian Mediterranean city of Alexandria to parents of Syrian and Lebanese extraction, he was raised a Catholic.
He studied at Alexandria's Victoria College before gaining a degree in mathematics and physics from Cairo University.
He joined his father's lumber business, but the acting bug had taken hold while he was studying, and in 1954 he made his silver screen debut in the Egyptian film "Siraa Fil-Wadi" ("The Blazing Sun") by Youssef Chahine.
The movie's romantic intrigue was echoed off screen as he married the leading lady, renowned Egyptian actress Faten Hamama, converting to Islam and renaming himself Omar Sharif.
They had one son, Tarek, before divorcing in 1974. Hamama died in January 2015.
- Playboy lifestyle -
Sharif never remarried, but had another son, Robin, from a brief relationship with Italian journalist Lula De Luca.
He lived between France, Italy and the United States, before settling again in Egypt.
His playboy lifestyle of fine hotels, casinos and restaurants from California to the Cote d'Azur was not without its brushes with controversy.
In August 2003, he received a one-month sentence and a 1,500-euro fine for headbutting a policeman outside a Paris casino. He was unrepentant, saying: "It made me the hero of the whole of France. To head-butt a cop is the dream of every Frenchman."
He was also ordered to take an anger management course by a California court in 2005, after punching a parking attendant in a dispute over whether he could pay in euros rather than dollars.
Sharif had a triple heart bypass in 1992 and suffered a mild heart attack in 1994, according to the IMDb movie database website. The 100-cigarettes-a-day smoker quit after the operation.
In January 2011, during Egypt's popular uprising Sharif called for then president Hosni Mubarak to stand down, while at the same time expressing doubts about the Muslim Brotherhood.
Story First Published: July 10, 2015 20:16 IST

Posted by Chloelouise at 8:48 AM