What a pleasure....an immense pleasure talking to Lieutenant Tim Brant from the Derby Police Department........

Talking about the recent Pit Bull situation--an officer became involved in an incident involving an American Staffordshire Terrier where he felt the life the animal control officer was in jeopardy.

He felt an attack was imminent and this resulted in him making a decision to shoot this American Pit Bull Terrier in the chest.

The good news is that the dog is with a veterinarian--the dog will be okay.

There was also a Husky involved--the Husky is with the Wichita Humane Society.

I must have spoken with Lieutenant Tim Brant with the Derby Police Department over 20 minutes.  I had so many questions as the story was very close to my heart.

In situations similar previous in other areas individuals were not so forth coming with information.

I was really impressed by his professional and informational nature.
Lieutenant Brant was willing to listen to me ask questions without any rushing.  I felt like he wanted to readily share information.

He explained to me the first priority is the safety of the citizens of Derby, Kansas; the animal control officers and the other animals and pets.

It seems like the dogs were out and about on their own all day.

It was a worrisome situation because the dog in question had injured a cat, basically cornered a lady while growling and the officer that shot the dog felt the life of the animal control person was in danger.

Tim Brant told me they have also found information that this dog has recently attacked a horse.

I asked Tim Brant if the police had or knew of any kind of program for the rehabilitation of owners and dogs that have acted improperly.  He said he did not but he would really like to know of any program like that if it exists.

This is a personal concern for me as a owner of a pit bull mix, Ronnie.  Some people are so afraid of my dog they literally pick up their little children and run.  He is old now but he actually has a scar on his head from a  non-malignant tumor.  If everyone only knew he was bossed around by old cats I think they would not run away.

In San Diego there is dog fighting and I felt I had seen signs of dog fighting here in Wichita, too.  I am beginning to think Pit Bulls are the most abused dog in our society today.

It does not take a genius or a long time of owning this breed to notice dog fighting and to hear all of the horrible stories.  In San Diego, at the dog park, literally someone came up to me with his pit bull and said "My dog could kill your dog."

In San Diego and here in Wichita there are very, very large dogs--American Staffordshire Terriers--they are way too big.  Pit Bulls should not be bred so large and they should not be running around loose on the streets.  The neighbors are afraid due to their bad reputation, these days--it is not fair to the neighbors or the dog.

Some American Pit Bull Terriers have not been socialized properly--they get out--in need of exercise--get in a dog pack and run after cats and other animals.  You know what happens next.

What people do not realize about Pit Bulls is that they are extremely heavy and solid dogs--in my experience I think they can knock any other dog.  It is just a matter of time.  Yes, they do enjoy rough-housing but in my opinion they are not really a watch dog such as a German Shepard.  They are just so darn loyal.

Ronnie is the best--he is not prey driven, but many dogs of all breeds will chase anything that moves.  Going to the dog park with any dog, but particularly, a Pitty can be a loaded-gun situation.

Rough-housing is one thing but an all out attack can happen at any time with any breed.  It can happen so fast there is not much any one can do once it gets started.  The dog attack can happen in a flash--everyone is suppose to have their dog under control.

Thank you to Lieutenant Tim Brant from the Derby Police Department for taking his valuable time to answer all of my questions and to listen to my concern for everyone involved.

My heart goes out to the Police Officers for the hard job they have to do and the very difficult split second decisions they have to make.

The thing is the officers and the dogs are under the gun for every outcome--if a person is injured or if a dog is injured.

I wish the best for the dogs and the officers involved and I hope the owners have a chance to receive dog training so their dogs will not be out running around if that is what is necessary.

It's not fair for the dogs--everyone ends up hating them....it's not fair for the residents and other animals to be in fear of being terrorized if that is the case....and it is not reasonable for the police and animal control to have to deal with animals that have been raised and cared for improperly--everyone loses--we have to make this a win win all of the people affected.

Agree or disagree--welcome comments and your good ideas and your take on the situation.

Talking about responsible dog ownership and the trials and tribulations of owning and American Staffordshire Terrier. 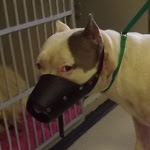 On July 15 at approximately 7 a.m., the Derby Police Department responded to a report of a vicious animal at 2121 N. Duckcreek Lane in Derby. After nearly 24 hours, both dogs were captured by the Derby Police Department.
When officers arrived on Duckcreek Lane, they found a husky and pit bull lying on top of a cat that appeared to be dead. The resident at this address discovered that one or both of the dogs had mauled her cat. The pit bull also approached a next-door neighbor when she was putting her trash cart at the curb. The dog was growling and barking at her.
A Derby Animal Control Officer attempted to capture the husky using a catch pole. During this time, the pit bull circled around and moved towards the Animal Control Officer and a police officer, growling and barking. Because of the dog’s threatening behavior and threat of attack, the police officer fired a single shot from a shotgun, striking the pit bull on its chest.
“Any time we deal with a vicious animal our goal is to safely capture the animal without incident,” said Derby Police Lt. Tim Brant. “Because of the aggressive nature of the pit bill reported to and witnessed by the police officer, the officer believed the pit bull was going to attack so he shot it to protect human life.”
After the shot was fired, both dogs ran off. Derby officers tracked the dogs to the railroad tracks between Buckner Street and River Street near an industrial area. The dogs were spotted along a thick line of brush near the tracks, but officers were not able to catch them.
Just after 4 p.m. Tuesday, police officers were dispatched to Shirts Plus, 703 N. Buckner, for a report of dogs on the back porch. When the officers arrived, the dogs ran from them again and were not captured. The Animal Control Officer set out a large dog trap in the area and police officers monitored the area throughout the night.
On July 16 at approximately 6 a.m., police officers were dispatched to 228 N. Water for a report of two dogs in the backyard. The resident was concerned about other animals in the yard and didn’t want the dogs to attack them. Both dogs were captured at this location without incident.
The pit bull was taken to the veterinarian for treatment, and the owners have been located. The dogs live outside the City of Derby near 47th Street South and K-15.
“We are happy to report that no other people or animals were harmed during the night as the dogs ran loose,” said Lt. Brant. “The primary responsibility of the Derby Police Department is to protect the life and property of our citizens and visitors. We value animals up until the point they pose a threat to humans or other animals.”