Jason Evans Counts Down the Blacklist 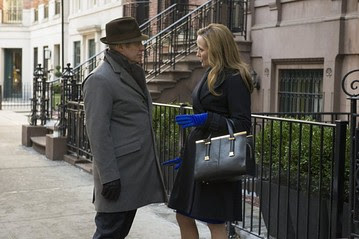 Scene from “The Blacklist”
NBC

As Blacklist episodes go this was unusual. For the first time I can recall, the subject of the episode, Madeline Pratt, end up just fine – neither captured nor dead. She’s presumably back in Florence. Also, it is very unclear why Red wanted the effigy in the end. Some of what happened involving the hunt for the effigy by the FBI and the Russians doesn’t really make sense. I need to think about it a bit more, but this episode just felt “off” at times. It is clear that Liz and Tom’s relationship is headed downhill. I wonder if they can recover. It is clear that we are going to find out a lot more about Jolene/Lucy next week, which is a major part of the current mythology. I can’t wait for that!

So what did you think? It is your turn to share your thoughts and theories about the show by posting something in the comment section. As always, I’ll be highlighting the most thought-provoking posts in my recap next week. I’ll see you there!
If you want to read more of Jason Evans’ commentary on the Movie and TV industry, follow him on Twitter @TVFilmTalk and be sure to check our Speakeasy every Monday and Wednesday for his recaps of The Blacklist and Arrow.

from WSJ Speakeasy
Posted by Chloelouise at 6:40 PM No comments:

Google Hang-Out:  The Wrap and the Oscars

I just accidentally stumbled on your hang-out today but I liked it.

A good prep for watching the Oscars.

It was a little more realistic than some shows and the people seemed friendly--because things like the Oscars do border on the ridiculous for the average person but we still want to watch them.

Just wanted to ask one question.....why do you think Saving Mr. Banks was not noticed more, particularly since Philomena has received so much attention--they are kind of in the same category.

For me, that movie was very powerful as it touched on alcohol which has affected every inch of my family.

I loved Emma Thompson in the role of PL Travers.

I do not really look for your website since I mostly look for the news but it keeps coming up on my e-mail and I put your thing about Piers Morgan in my blog.

I would like to put your answer in my blog ...the ronnie republic.

Thank you for your time....chloe louise
Posted by Chloelouise at 1:52 PM No comments:

Posted by Chloelouise at 1:35 PM No comments:

Richard Anderson: Welcome to My Site...

Richard Anderson: Welcome to My Site...: Greetings, I use the word "greetings" again because have the desire to thank all of you for your interest in my works... and now h...
Posted by Chloelouise at 10:27 AM No comments: