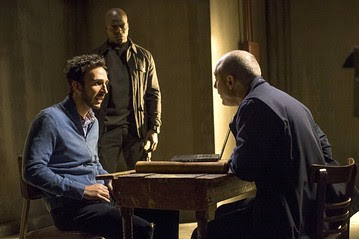 This was another tour-de-force by James Spader. He has so much fun playing bad Red and we saw a lot of bad Red tonight. The story of the Samaritan was a  bit of a yawner, it just did not matter to the overall plot. I am somewhat disappointed that Red did not figure out who the ultimate mole is, but that is probably something that will come in time. And it was nice to see that Alan Alda is going to do more than just show up for one episode. I wonder if they will ever start calling him by name or at least tell us what his job is. It appears he is some kind of high-ranking intelligence official. Someone high-up enough that he would be called to testify before a senate committee.
So, what did you think of the return of the show? Did you enjoy Red’s quest to find and kill everyone who had betrayed him? Chime in in the comment section and we’ll have a conversation. See you there!

If you want to read more of Jason Evans’ commentary on the Movie and TV industry, follow him on Twitter @TVFilmTalk and be sure to check our Speakeasy every Monday and Wednesday for his recaps of “The Blacklist” and “Arrow.”
Posted by Chloelouise at 6:52 PM No comments:

from the ronnie republic:

"Well, it's going to ruin the green space between Fir and Elm streets at the Grape Street Dog Park edge of the canyon running behind the houses on Granada in the South Park area of San Diego,"  sadly told by the neighbor putting up the flyers.

It does seem like the proposed condo complex, 5 residences, will be located right in the middle of the Balboa Park Trail that runs along the canyon from 28th street and adjacent to the dog park.

It's a beautiful area--there are walkers and dogs all day long using that path.  Yes, I know well because it goes right behind my house and they are an easy view from my patio and kitchen.

This is basically the woods right in the middle of the city.

It is quite lovely.  The residents must be in a surprised state to think houses and cars and a new road will be there instead of their sunset seen through the Eucalyptus grove.

Not to mention......red tail hawks, Barn owls and their children, coyotes, possums, squirrels, raccoons...you get the picture.

Everyone should see the Grape Street dog park and this Balboa Trail--it goes up and down the canyon on log steps, continuing past the dog park north, through the golf course, old oak groves and up the hill to the other portion of 28th street near Morley Field and Bird Park--it's all free including the vintage house tour.

Some of these long time neighbors of Golden Hills are up in arms--they are protective of their vintage digs.

This is basically where the houses will be.  This is a picture of the Balboa Park Trail running along Granada on the edge of the dog park.

according to the poster and the neighbors who will be affected the city will be advised by the Greater Golden Hill Planning Committee.......

according to a neighbor very affected by the planned condo development....there will be a road on the hill up to and edging the dog park.  Will the road be in the path of the Balboa Park Trail?  He said he had seen the plans and they are quite unnatural.

Personally, I am worried about the baby barn owls.  They have children every year, around May, in this Eucalyptus Grove. 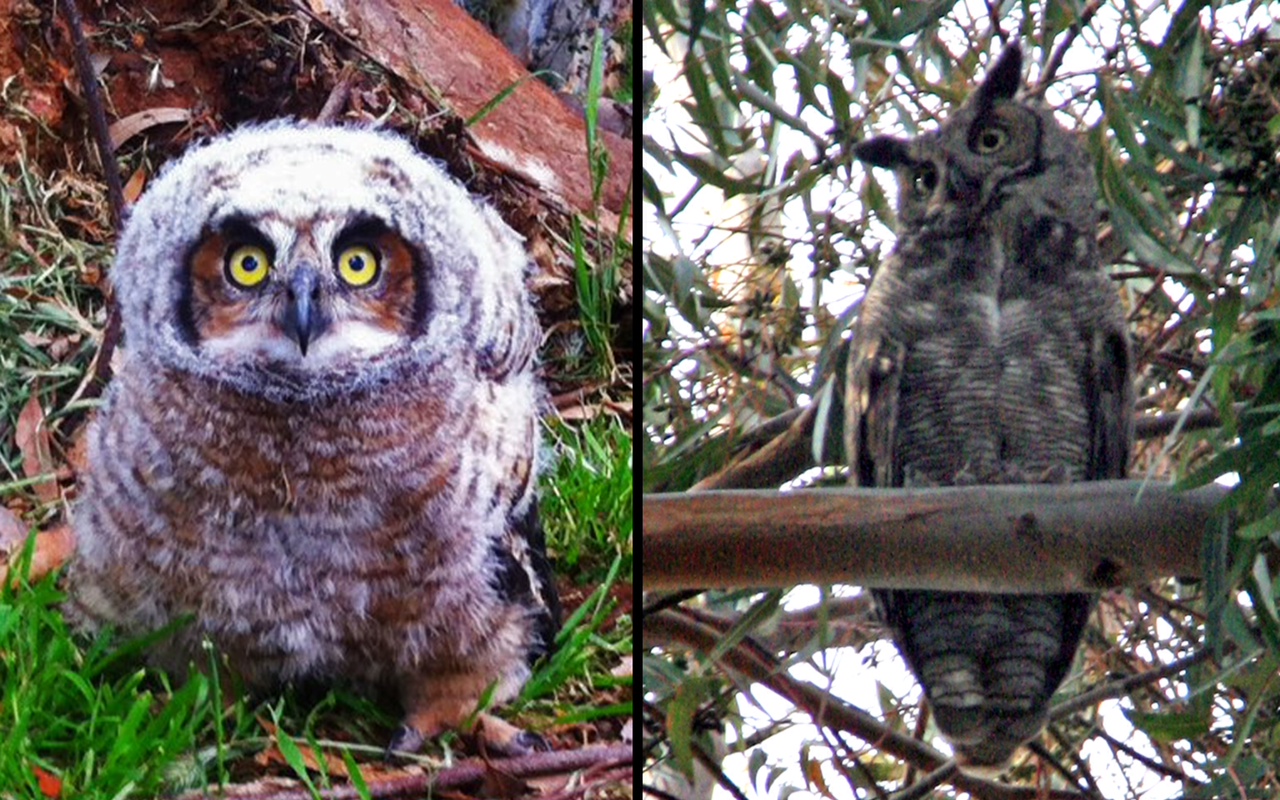 I do not have knowledge of the plan or any info other than chatting with the neighbors as I go to the dog park each day.

I did try to contact the above committee chair, Alvarez and Hooper.  Alvarez replied by e-mail that he did not have any comment at this time.

Please feel free to post your thoughts--agree or disagree--as that is part of the story and community information.

One of the very concerned residents felt like it would be a good idea for everyone to send e-mails to the above address.

South Park is located within the Golden Hills area of San Diego.  It is one of the oldest neighborhoods and it borders Balboa Park.

Here is a link to my story on the dog park showing the beauty of the area: 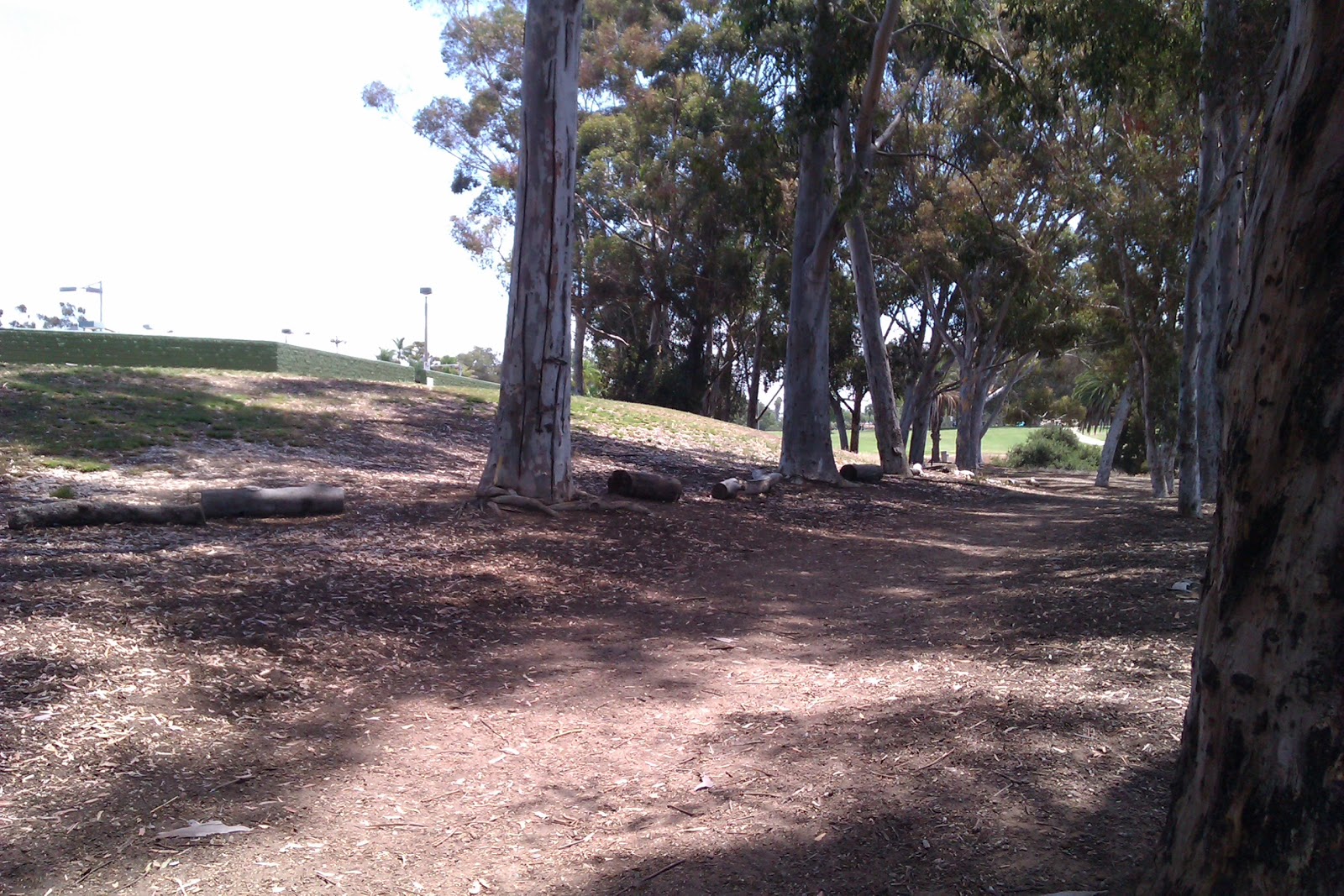 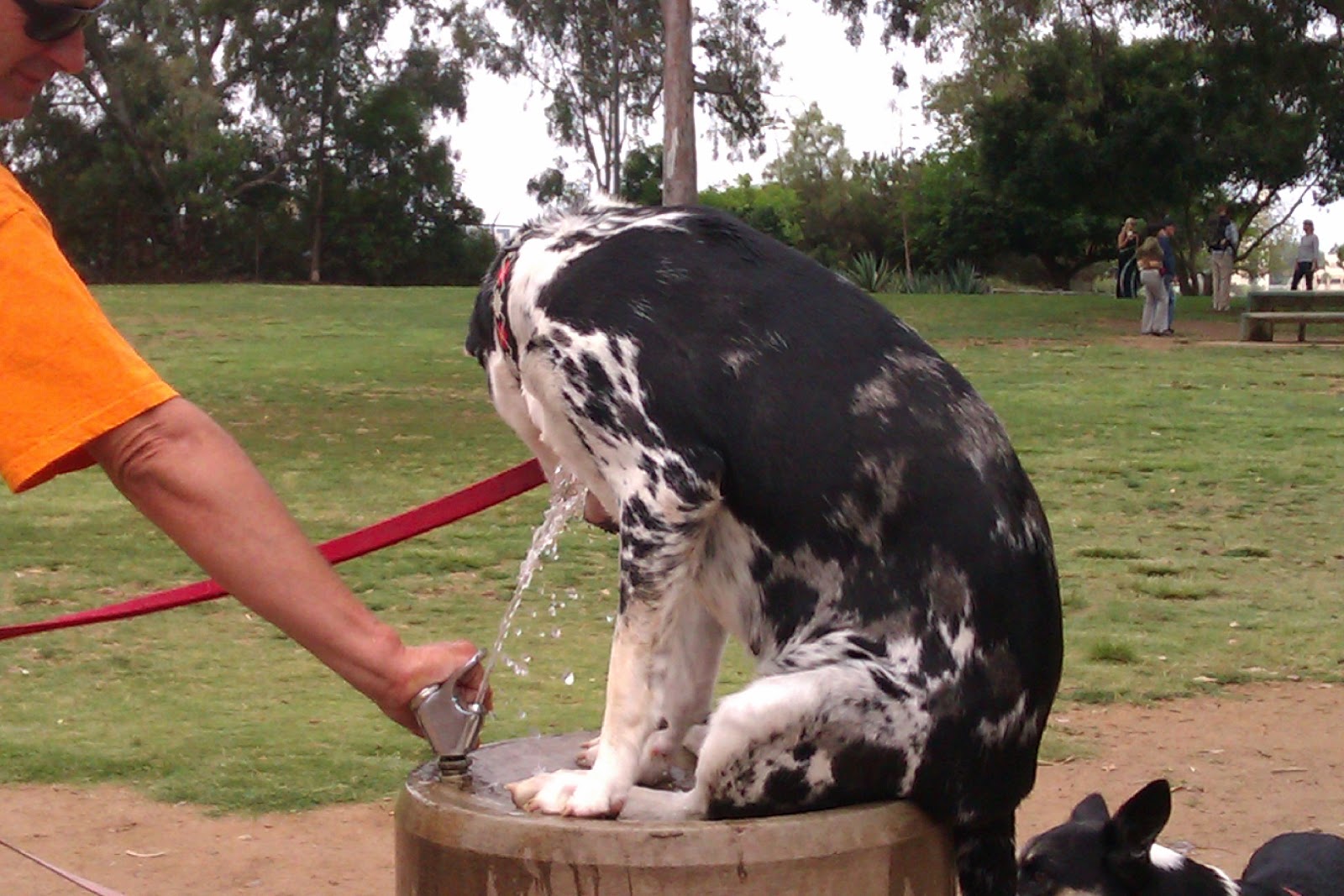 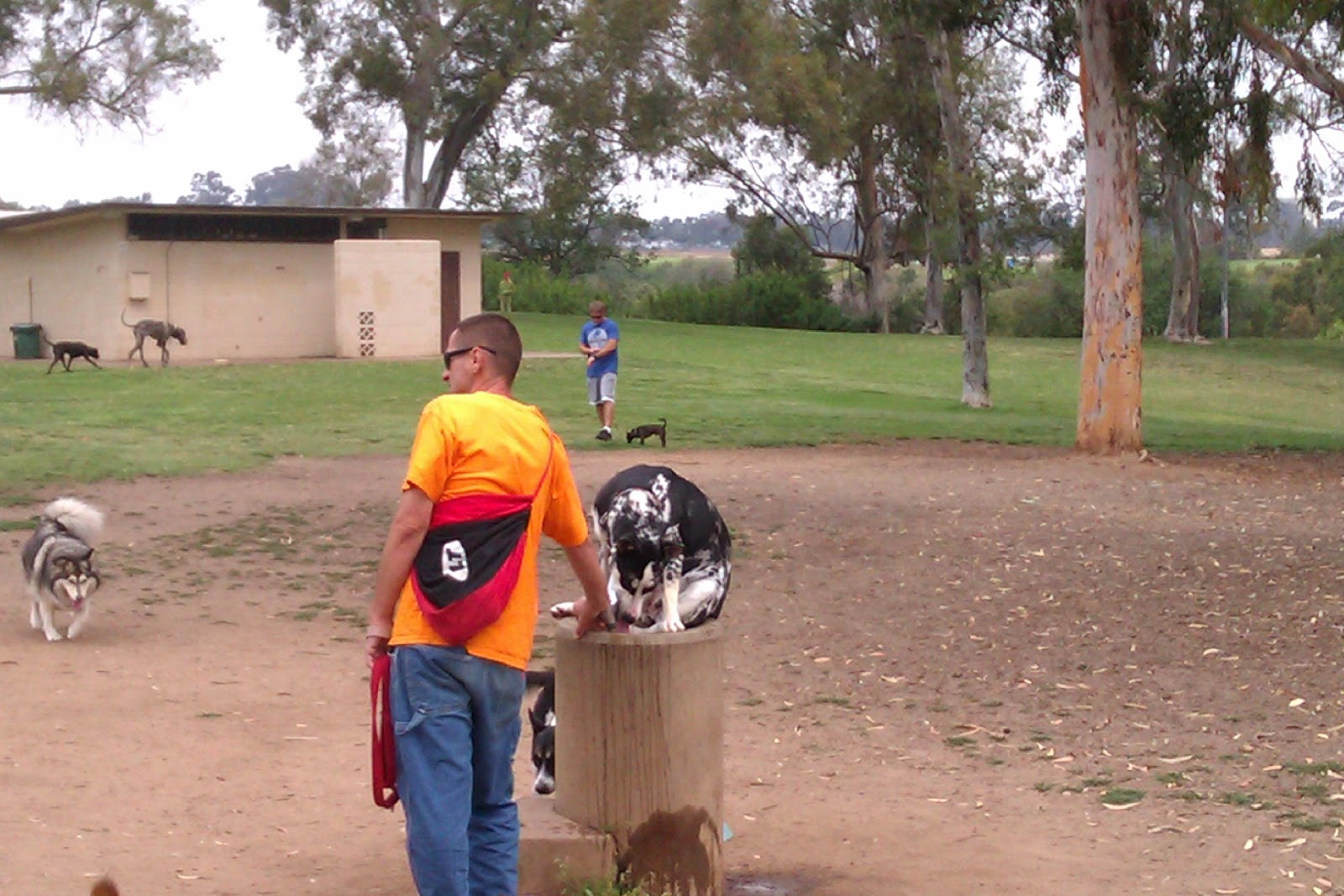 here is a story about the baby owls of the grape street dog park:

some of the neighbors started a campaign on facebook called:  Protect the 28th street canyon coalition.....here is a link to that page:

Please...O'Reilly and Ailes are exposed on this one...right, it's a scary thought but Piers Morgan already called it on his show last week when he noted the big "O" neglected to report on bridge-o-rama.

Obviously, Christie is fox man for the position in the White House.

As a dem, I liked Christie, too.  He was an exciting force on the political scene for 2016 but now that ship has sailed and the repubs will lose again.

Between Bob Filner and Chris Christie my feelings have been hurt.

It takes a woman to do the real big jobs and my girl Hillary will be ready to clean up the mess O'Reilly, Ailes and Christie left behind.
Hillary Clinton--2016
Chloe Louise--Hillary girl forever

By LUCY MCCALMONT | 1/14/14 6:23 AM EST
Fox News’s Bill O’Reilly defended Republican Gov. Chris Christie in the wake of his administration’s bridge scandal, saying the New Jersey governor should be believed and he is being made a target for 2016.
“He says he didn’t know about it, fair-minded people should believe him, until there’s evidence to the contrary,” O’Reilly said Monday on “The O’Reilly Factor.”
Continue Reading

In a segment he called “The Politics of Destruction,” O’Reilly said the flap over the lane closures is a way for Democrats to paint Christie as a bully and take him down as the strongest threat to Hillary Clinton if both decide to run in 2016.
(PHOTOS: Republicans, 2016 contenders)
O’Reilly called the scandal “pretty bad” but supported Christie’s defense that he was unaware of the situation.
O’Reilly said that unlike earlier GOP presidential candidates — specifically, Mitt Romney and Sen. John McCain of Arizona — Christie would have been aggressive enough to take on issues like Benghazi and the Rev. Jeremiah Wright. He added that Christie’s appeal also separates him from the potential 2016 pool, as well.
“The Democratic Party does not fear hard-right conservatives like Sen. [Ted] Cruz and Sen. [Rand]Paul. The left believes there are not enough committed conservative voters to elect those men,” O’Reilly said.
(QUIZ: How well do you know Chris Christie?)
Although he said Cruz and Paul will be factors in the primaries, he maintained Christie is the top target of the Democrats.
“Christie is the biggest threat to the Democratic Party. We are seeing a personal campaign lodged against him that will not calm down any time soon,” O’Reilly said.
“They have got to destroy Christie before he can get to the primaries,” he added.
Back to top

Read more: http://www.politico.com/story/2014/01/chris-christie-bill-oreilly-bridge-scandal-102137.html#ixzz2qOv2Y8rN
Posted by Chloelouise at 11:05 AM No comments:

A long standing feud between Fox News host Geraldo Rivera and NPR Media Reporter David Folkenflik was brought back to the surface Monday evening as the two engaged on Twitter over a 2001 report Rivera did from Afghanistan.

Folkenflik is a lying leech paid by taxpayers

While reporting from Tora Bora in 2001 for Fox News, Rivera described on air an incident of friendly fire, claiming he had been on the scene where three Americans had died. Reporting then for the Baltimore Sun, Folkenflik found that Rivera was actually 300 miles from the site he described and that no Americans had died there that day. Rivera blamed his mistake on the “fog of war” and said he had confused the event near Kandahar with one where he actually was in Tora Bora — but the Tora Bora incident occurred three days after Rivera’s report.
(Also on POLITICO: Geraldo Rivera: Top 5 legendary incidents)
This all came back up on Twitter when a man tweeted at Rivera while watching Folkenflik on CSPAN talking about his recent book "Murdoch's World" about Fox News where he details the Tora Bora incident.
Rivera shot back: As I proved years ago, Folkenflik's story was dead wrong-a grossly unfair anti-Fox hatchet job" and that he is "pulling documents (and) will soon prove how he lied (and) how his (mainstream media) pals willfully ignored truth."
When asked by a follower why Rivera was just now pulling documents on a more than decade-old report, Rivera said he "proved it (in) 2002 but my facts didn't fit anti-Fox anti-war narrative so he skated."
"His premise-that there was no friendly fire in Tora Bora-is a provable lie," Rivera continued. "This skunk has been hiding at NPR for a decade cashing in on his anti Fox bias."
Rivera then promised to produce the documents proving his side of the story by 5:00 p.m. on Tuesday.
Over a series of more than 15 tweets, Folkenflik responded to Rivera, outlining his original reporting and noting "I'd be very interested in hearing from @geraldorivera what proof he has now that he could not offer in the years since."
Stay tuned....
Read more about: Fox News, NPR, Geraldo Rivera

copied from politico
Posted by Chloelouise at 10:44 AM No comments: