Posted by Chloelouise at 7:14 PM No comments:

The Anniversay Song - The Lennon Sisters (With Father William Lennon)

Posted by Chloelouise at 7:13 PM No comments:

Posted by Chloelouise at 7:00 PM No comments:

in ENGLISH:
Dear music fans on youtube & the internet,

this time I featured Eddie Guitar Burns in my little harmonica tribute.Although mainly known as a guitarist he frequently played the diatonic harmonica.

He started out in the 40's with Sonny Boy II and John Lee Hooker and had in the early 60's a backing band for his recordings that included not only the future Funk Brothers like Joe Hunter or Popcorn Wylie but THE Marvin Gaye aswell (on drums).

You'll soon find a playlist called the EDDIE GUITAR BURNS SHOW on my channel site which features music by Eddie Burns and musicians and music connected with him.

2:44
blues harp (Eb) 2.Position
in ENGLISH:
Dear music fans on youtube & the internet,
this time I featured Eddie Guitar Burns in my little harmonica tribute.Although mainly known as a guitarist he frequently played the diatonic harmonica. He started out in the 40's with Sonny...

Thank you FRAMAT 2009 for telling us about Eddie Guitar Burns.  It is so fun to hear from someone international.  In my mind I am always so San Diego.

Posted by Chloelouise at 9:59 AM No comments:

2009 FRAMAT Talks Elvis and Jagger and Surviving Rock and Roll

2009 FRAMAT Talks Elvis and Jagger and Surviving Rock and Roll

Hard to compare:
Elvis was the first "official" Rock&Roller who recorded BEFORE C.Berry,Bo Diddley,Carl Perkins (all influenced the Stones or the Beatles) and a solo act. Fats Domino & Little Richard recorded before Elvis but they were black & the music was called R&B then.

And although Little Richard recorded in 1951 it was very different in style (Jump blues) from his legendary influental Specialty records like Tutti Frutti, Lucille etc.

Fats Domino got his name because he used to play Fats Waller Songs (a jazz pianist&vocalist from the late 20's - early 40's).

Maybe the only one who before Elvis was Bill Haley & his Comets. Unlike Elvis Haley was really a Combo act which featured especially the saxophonist & guitarists much more than Elvis' musicians. Some of them even split from Haley and went as JODIMARS solo.

Jagger was part of the Stones and in the beginning not even bandleader. Stones hit the scene when the Beatlemania already begun. Stones were the antithesis to the Beatles. Elvis was the antithesis to Sinatra who made completely different music where Stones & Beatles shared similar roots.

Colonel parker did not want to be an artist. I am no expert but Oldham wanted to be I guess (from what I read).

Everything what sold well was ok with Parker. Did not tell elvis what to do musically or artistically because he had no ambitions. He did what Elvis wanted to do: He got him to Hollywood. The negative aspect was he did not care about the material because he had no artistical ambitions. He cut off for instance the work with Leiber-Stoller because they made their own publishing & did not publish for Elvis

Thank you 2009 FRAMAT for telling us this important history about Elvis Presley and Mick Jagger and The Rolling Stones.

here is a link to the channel of FRAMAT 2009 on you-tube: 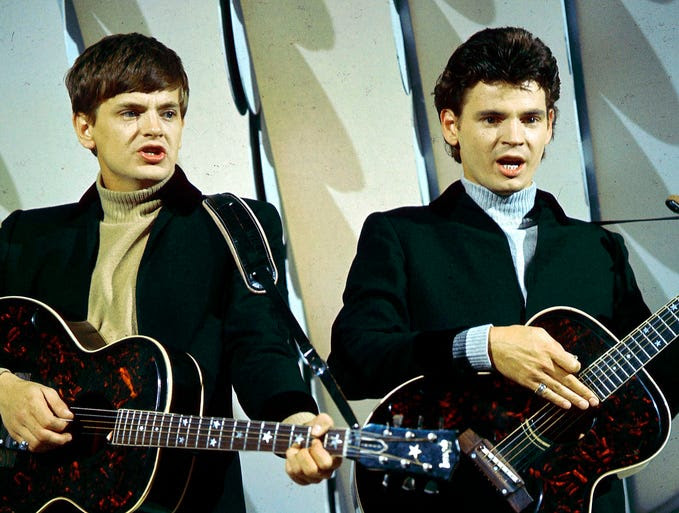 Musician Phil Everly, the younger half of the Everly Brothers, died Jan. 3, 2014, in Burbank, Calif. The duo perform in this 1965 photo.  David Redfern, Redferns
Fullscreen
Next Slide

The younger half of the influential Everly Brothers has died at 74. 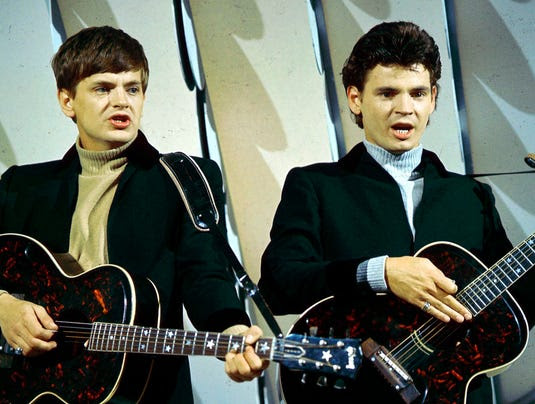 SHARE 8364CONNECT 333TWEET 41COMMENTEMAILMORE
The concept of harmony was both intrinsic to the music of the  and sometimes foreign to their personal relationship.
Nevertheless, Phil, who died Friday at age 74, and Don, 76, forged an endearing sound and a half-century career that saw them hit the Billboard top 40 chart 26 times, influence artists ranging from The Beatles and the Beach Boys to , Simon & Garfunkel, Neil Young and Alison Krauss, and land in both the  and the Country Music Hall of Fame.
Don usually sang the baritone notes and most of the lead parts while Phil handled the higher range, their voices intertwining organically, almost supernaturally, on classics such as Cathy's Clown,, Crying in the Rain, Bye Bye Love, , Walk Right Backand Claudette.
LISTEN: 10 great covers of Everly Brothers songs
Phil was born in Chicago into a family of traveling musicians and lived in Iowa as a child, but the brother act he formed with Kentucky-born Don in the mid-1950s drew its inspiration from the sounds of the Appalachian Mountains.
Country and bluegrass acts such as the Delmore Brothers, Osborne Brothers and Louvin Brothers formed a template for the close-harmony sound, and the guitar-playing Everlys took it in a smoother, pop-rock direction with material written by themselves and Nashville tunesmiths, most notably Felice and Boudleaux Bryant. The influence of Texan Buddy Holly, with whom they toured in the late 1950s, also can be heard in their sound (and Phil would serve as a pallbearer at Holly's funeral following his fatal plane crash in 1959).
Behind the scenes, their partnership was sometimes problematic — they battled drugs, managers and each other. At a California concert in 1973, their feuding erupted onstage and they split, barely speaking for a decade, during which time they pursued solo careers with minor success. 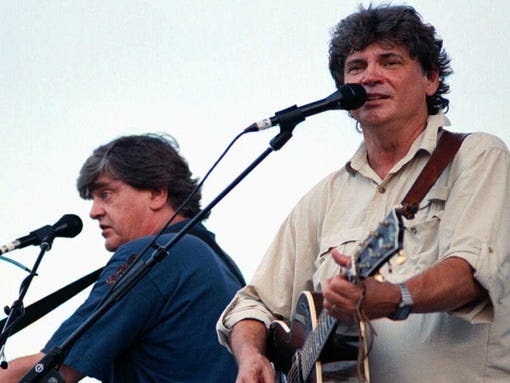 Phil and Don Everly sing some of their hits in August 1997 at the 10th annual Everly Brothers Homecoming concert in Central City, Ky.(Photo: Suzanne Feliciano, AP)
A reunion that began in 1983 resulted in a well-received live album and two excellent studio albums, EB '84 (which featured the Paul McCartney-written hit On the Wings of a Nightingale) and Born Yesterday.
Neil Young inducted the brothers into the Rock Hall in 1986, where they were among the inaugural class of 10 performers. The duo released their final studio album, Some Hearts, in 1988 and continued to perform and collaborate with others into the late 1990s.
Two months before Phil died in Burbank, Calif., from complications of chronic obstructive pulmonary disease after a lifetime of smoking, Green Day's  and jazz-pop singer  released an Everlys tribute album,Foreverly. Armstrong was full of admiration for the brothers.
The Everly harmonies "are so immaculate," Armstrong told USA TODAY. "And that record (the duo's second album, ) was pretty daring at the time. A lot of other rock guys were trying to go pop.  had a string of big hits, and the same with  and Elvis. And here the Everlys were playing these torch songs and murder ballads. For them to do something so dark and angelic was appealing to me."
After Phil's death, Jones said in a statement: "The high harmonies Phil sang were fluid and so beautiful and always sound effortless in a way that just washes over the listener. He was one of our greats and it's very sad to lose him."
On Twitter, Boomers mourned, or at least Boomers with Twitter accounts: Presidential historian  tweeted a concert poster from 50 years ago in where the Everly Brothers got top billing over the Rolling Stones.
Contributing: Lindsay Deutsch, Elysa Gardner and Edna Gundersen
copied from usa today.......
Posted by Chloelouise at 8:56 AM No comments: