Professional film critic since 2003 and a member of the San Diego Film Critics Society. Host of “The Movie Guys” radio film review show from 2007 through 2013. Film and television critic for Showbizjunkies.com and a movie buff since 1973. 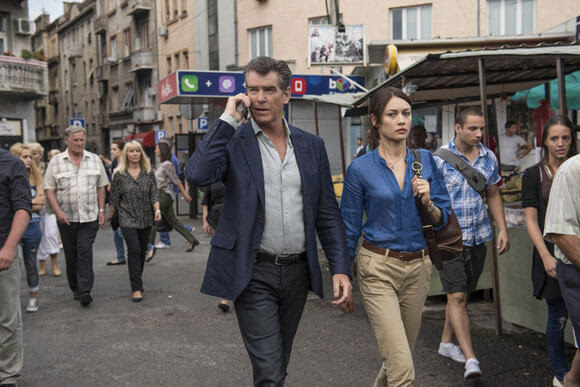 Pierce Brosnan and Olga Kurylenko star in Relativity Media’s ‘The November Man’ (Photo Credit: Aleksandar Letic © 2014 No Spies, LLC All Rights Reserved)
“He’s probably the best friend I’ve ever had,” says Devereaux (Pierce Brosnan). “All your friends try to kill you?” asks Alice (Olga Kurylenko). “Eventually,” replies Devereaux who’s being hunted by a CIA assassin he trained before retiring from the spy game in the dramatic action film, The November Man.
Ex-CIA operative Peter Devereaux has been enjoying a quiet, peaceful life in Switzerland when an old colleague, Hanley (Bill Smitrovich), reaches out for his help on one last mission. A mutual friend of theirs, Natalia (Mediha Musliovic), needs to come in from the field and has become so paranoid she’ll only trust Devereaux to bring her in. Still having a soft spot for Natalia who he had more than just a “working” relationship with, Peter agrees to help.
Unfortunately, things don’t go as planned and Natalia’s cover is blown during her attempted extraction. She gives Devereaux the name of an important witness who needs protection: Alice Fournier (Olga Kurylenko). Not long after finding Alice, Devereaux discovers that they’ve both been marked for death by the CIA due to information Alice has involving the CIA and the Chechen War. If that wasn’t bad enough, to make matters worse Devereaux’s old protégé, David Mason (Luke Bracey), is leading the hunt.
With both CIA and Chechen assassins hunting them and growing suspicions that there is a mole in the agency, Devereaux finds himself on the run with no one to trust and a slim chance of survival.
Gritty and suspenseful, The November Man brings ex-007 Pierce Brosnan back to the big screen in a darker, more serious spy thriller. Brosnan is perfect as Devereaux, the retired master spy who reluctantly gets pulled back into the world of espionage and soon realizes that even he is in way over his head.

Devereaux is a colder, older, and highly experienced spy who knows how to survive in the Cold War. Finally, Brosnan is given the opportunity in November Man that he didn’t have in the Bond series: to portray a seasoned, refined, and extremely lethal secret agent straight, without the tongue-in-cheek dialogue. And he does it wonderfully.
Also a Bond franchise veteran (although from a different era than Brosnan), Olga Kurylenko is extremely effective in the role of Alice. Kurylenko portrays her as both an overwhelmed, terrified and mistrusting target and at times a sexy, willful and determined woman. Kurylenko and Pierce have solid chemistry which comes across strong in the few quiet moments they have together on screen in between the fighting and chasing scenes.
The action scenes are thrilling, with car chases, multiple shoot-outs and a few cat and mouse on foot chases. The scene where Bracey as Mason is hunting Devereaux through the streets of Belgrade while talking to him on a cell phone is sure to be a crowd-pleaser, with Devereaux taunting Mason with lines such as, “So kid, tell me about your target.”
The November Man‘s realistic dialogue and strong cloak-and-dagger tone is due to the terrific direction by Roger Donaldson working from a script by Michael Finch and Karl Gajdusekvc. The cinematography and production of the film looks stunning, and benefits from being shot on location in Belgrade and Montenegro. Perhaps the only drawback to the film is the slowing of the pace at the midpoint in The November Man, but that picks back up as it heads toward a suspenseful finale.
Gripping and action-packed, The November Man is a first-rate spy thriller that’s sure to entertain Pierce Brosnan and espionage movie fans.
GRADE: B
The November Man is rated R for strong violence including a sexual assault, language, sexuality/nudity and brief drug use.
– Reviewed by Kevin Finnerty
Follow Us On:

Thanks, Kevin, for your very insightful movie review...here is a link to Kevin's webpage and more movie reviews:
http://www.showbizjunkies.com/movies/the-november-man-review/