Ann Coulter is on a roll. Her commentary is becoming more deplorable by the week. Yesterday’s column hit an all-time low.[1] 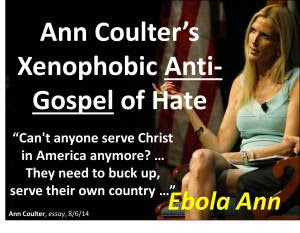 copied from the facebook page of Daniel Borchers....CoulterWatch
Posted by Chloelouise at 11:57 AM