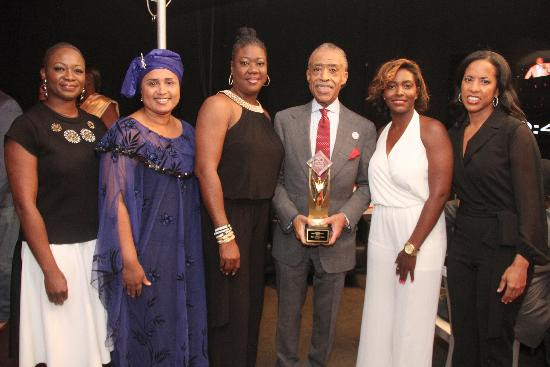 (LEFT TO RIGHT)Vanessa K. Bush, ESSENCE Editor-in-Chief; Kadiatou Diallo, Mother of Amadou Diallo; Sybrina Fulton, Mother of Trayvon Martin; Reverend Al Sharpton, President of National Action Network; Nicole Paultre Bell, Wife of Sean Bell; and Michelle Ebanks, ESSENCE President. (Photo: Walik Goshorn/ESSENCE)
*(New York, NY) — Rev. Al Sharpton was honored on Sunday in New Orleans during the Essence Festival with the Icon Award.
Rev. Sharpton was surprised in front of a packed house at the Superdome in New Orleans with the award acknowledging his service as one of America’s greatest civil rights heroes.
The Icon Award was presented during a touching tribute to his work by three women whose lives he has impacted by bringing their stories to national attention. Kadiatou Diallo, mother of Amadou Diallo; Sybrina Fulton, mother of Trayvon Martin and Founder of the Trayvon Martin Foundation; and Nicole Paultre Bell, fiancée of Sean Bell and President and Founder of When It’s Real, It’s Forever Inc.; joined to thank him for his support. These women spoke to the audience about Rev. Sharpton’s tireless fight against injustice on behalf of their families, providing them hope and giving them a voice.
This was the 20th anniversary of Essence Festival and during the awards presentation Vanessa K. Bush, ESSENCE Editor-in-Chief and Michelle Ebanks, President of ESSENCE, reflected on his contributions to the magazine over the past two decades.
“Trayvon Martin. Sean Bell. Amadou Diallo. These men became our sons, our brothers and our husbands and he demanded the world to never forget,” said Vanessa K. Bush. “He fought for the mothers, sisters and wives who lost their men to senseless tragedy and he stood up and spoke out for them when there was no one else.”
Read more at http://www.eurweb.com/2014/07/rev-al-sharpton-surprised-with-essence-festival-icon-award-photo/#2LfRPHGlTK67Dc1C.99

Posted by Chloelouise at 9:07 AM