“All countries suck compared to America.”[1] 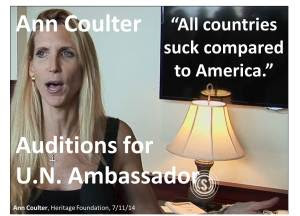 This from the stereotypical Ugly American who recently, again, became an international sensation, this time for her repeated denunciations ofsoccer as un-American, succinctly encapsulated in two words: “It’s foreign.” Coulter’s antipathy toward foreigners and immigrants (legal and illegal) is legendary.
Perhaps she is auditioning for an ambassadorship to the United Nations. Wouldn’t that be a hoot!
Surprisingly, Coulter, a world-traveler, “spent summers in Spain” as a child and, as an adult, traveled worldwide to Grateful Dead concerts and ski resorts. In fact, her first soccer diatribe was published while she was in Paris (France, not Texas).
Let’s consider Ann Hart Coulter for the next U.S. Ambassador to the United Nations. Wouldn’t that be a sight to behold? Coulter favors Western Europeans (those who are non-liberal, non-feminized, and non-pacified) over the rest of the world, particularly the Third World. But English must be spoken!
Here is a sampling of classic Coulter commentary. Travel the world through Ann’s eyes.
Coulter’s If Democrats Had Any Brains contained a section entitled, “FOREIGNERS, OR THE ‘NON-SOAP-ORIENTED.’” Her lead paragraph began, “They’re no good. Don’t trust ‘em – except Denmark, Australia, the Czech Republic, and the rest of new Europe, which, amazingly enough, has recently come to include France and Germany. … Canadians, for example, are either great or awful, and at the outset of the War on Terror, the balance was swinging perilously close to awful. Better shape up, Canada! At this point, we’re only keeping you around for the beer.”
Canada
“[Canadians] better hope the United States does not roll over one night and crush them. They are lucky we allow them to exist on the same continent. … We like the English-speaking Canadians.”[2]
China
Asked about invading China, Coulter replied, “Yeah!”[3]
Although she is opposed to the totalitarian regime in China, Coulter nevertheless ridiculed blind Chinese dissident Chen Guangcheng, tweeting, “Couldn’t we just tell that blind Chinese dissident that he’s in America now?”[4] Responding to the controversy she had created, Coulter joked, “I’d say they’re being a little myopic, except they’d be offended.”[5] One could say that Coulter is blind to her own insensitivity.
Europeans
Asked why “Europeans prefer liberals to conservatives,” Coulter answered, “Because you’re all a bunch of atheists, humanists, and moral relativists. Love the food, though! And don’t get me started on the shoes you wonderful people make! They’re to surrender for!”[6]
France
“Attack France!”[7] Her essay title concluded with these words: “If this is a war against terrorism and not a Eurocentric war against Islam, the conclusion is ineluctable: We must attack France. What are they going to do? Fight us?”
“This is as opposed to France, against whom I think we should launch a preemptive nuclear strike.”[8]
Iran
“Well, I keep hearing people say we can’t find the nuclear material, and you can bury it in caves. How about we just carpet bomb them so they can’t build a transistor radio?”[9]
“How about [invading Iran] right now? You have a lunatic running Iran, who’s running around claiming he has a nuke. When do we wait? Do we wait for a city to be taken out?”[10]
Coulter said, “It’s good for Wall Street if we bomb Iran,” adding, “I think it would be fun.”[11]
Coulter tweeted, “Let’s destroy Iran by giving them ObamaCare.”[12]
Lebanon
“Some have argued that Israel’s response is disproportionate, which is actually correct: It wasn’t nearly strong enough. I know this because there are parts of South Lebanon still standing.”[13]
North Korea
“I think we ought to nuke North Korea right now just to give the rest of the world a warning. Boom! … I just think it would be fun to nuke them and have it be a warning … to the world.”[14]
Syria
“Perhaps we could put aside our national, ongoing, post-9/11 Muslim butt-kissing contest and get on with the business at hand: Bombing Syria back to the stone age and then permanently disarming Iran.”[15]
Third World
“It’s extremely difficult to come in if you’re coming from a Western European country. However, if you are from a Third World country, ‘Welcome.’ If your genetic ancestors did not invent the wheel, ‘Oh, well, let them come in.’ But they’re the natural Democratic voters.”[16]
Resources:
See Chapter 10: “Equality: Self-Evident Truths,” The Gospel According to Ann Coulter, 2012, available as a free pdf download atwww.coulterwatch.com/gospel.pdf. It documents Coulter’s astonishing predilection to racism, sexism, and classism.

copied from www.coulterwatch.com
please check out the web page for more info and comments on this post......here is a link:
http://coulterwatch.wordpress.com/

Posted by Chloelouise at 7:54 AM