from Jalopnik: That Zero Hedge Article On Unsold Cars Is Bullshit

Filed to: JOURNALISMISM
Sunday 10:47am

I usually enjoy reading Zero Hedge because the insights
are often interesting and I think pessimism is an underrated
virtue these days. However, this guest article on unsold cars
is so demonstrably false I had to take a break from my Sunday
morning to dispute it. 12P
It is an admittedly appealing idea to think that automakers,
unable to sell cars, are just wildly producing them and then
dumping them around the world in an endless cycle of mass
production hysteria. So much of the modern economy seems
senseless and inexplicable, which is why an article like this
seems to give some credence to the feeling many of us have
inside that something is terribly wrong.P
The visuals are strong, the headline is clear, and you almost
don't have to read the article to viscerally understand the
problem. I, more than anyone, get the appeal of this story
because it seems to largely rip off an article I wrote — including
the images and headline — more than five years ago (which
itself was largely a rehash of a Guardian article).P

Where Are Automakers Stashing Unsold Cars?

The steep decline in worldwide car sales is causing automakers to stash over-produced cars in…Read more
I would think that most intelligent people would read this
and obviously see the flaws but, alas, I've had enough
emails about it this morning that I feel the need to refute it.
And since it's a (bad) copy of something I wrote, I have an
extra responsibility to kill this misunderstanding before it
has a chance to spread.P
I'll get to a point-by-point refutation in a second, but if you
don't have time for that just look at the photos and look at my
article and then look at a Google Satellite pic of those same
places and you'll see they're gone.P
There's even an update in the post where either the author,
Vincent Lewis, or Tyler Durden —ZH's mysterious
author — realized there was a fault in their knowledge
and they say this:P

at the Nissan Sunderland test track have disappeared?

Now I don't believe they have all suddenly been sold.

I would guess they may have been taken away and
recycled to make room for the next vast production run.P


Well, if you don't want to believe that in five years
they couldn't sell a few hundred cars at a price
above the recycle rate then I can't help you,
because you must be so paranoid you think
that Fudgie The Whale is the secret symbol
of the illuminati. 3P
He does say "The car industry would never sell
these cars at massive reductions in their prices
to get rid of them, no they still want every buck.
If they were to price these cars for a couple of
thousand they would sell them. However,
nobody would then buy any expensive cars
and then they would end up being unsold. Its
quite a pickle we have gotten ourselves into"P
It is true you can't sell a car for $500 and then hope
to sell the same car for $15,000, but even at the
deepest point of the recession car companies were
able to sell all these cars with discounts well
above the low rate this guy is thinking of. There's
just a lack of basic understanding of how the
world works here, which we'll get into.P
So let's go through point-by-point because it's
Sunday, I was supposed to spend this morning
playing video games and watching bad action
movies, and I don't want to have to come back to this.P

1. Most Of These Photos Are Very OldP 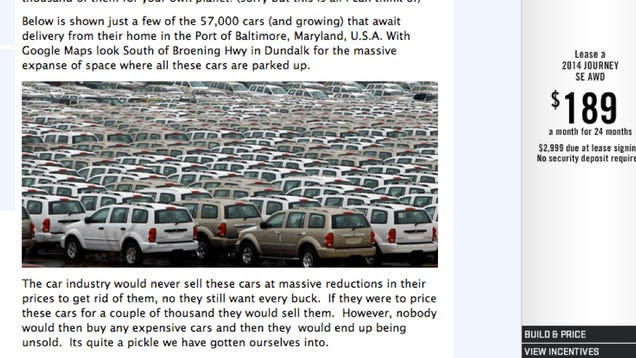 SEXPAND
If the fact that I'd written this post five years ago wasn't proof
enough that these photos are old, most of the cars in the piece
that are identifiable are very old. There's a bunch of old Honda
Accords that are a generation-and-a-half old, and even some
Dodge Durangos that are pre-bankruptcy. P
Go back into the Getty or AFP or AP sources for these photos
and you'll see, by and large, they're photos from the middle of
the post-recession Carpocalypse when the car market collapsed
in Europe and the United States.P
Do they legitimately show a backlog of cars that were
overproduced in advance of massive drop in demand?
Indeed, they do, but the companies producing them
(in this case Nissan) corrected this problem, oh,
four-to-five years ago. It was a temporary condition.P
If you look in the Getty Images library there are also
photos of Nazi troops in Paris and this one of Michael
Jackson singing at the Super Bowl. P 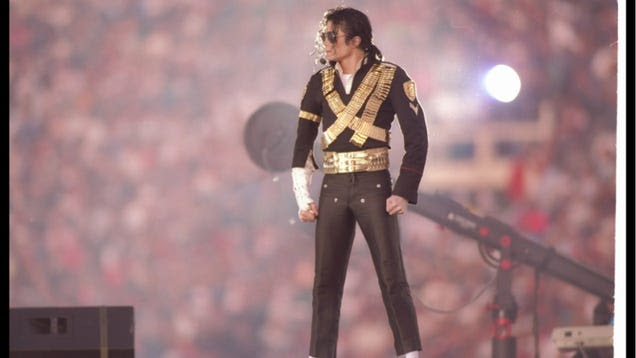 SEXPAND
Does that mean Paris is full of Nazis and Michael Jackson
has been reincarnated? Nope, it's just that photos are
recordings of light on a flat medium that capture a moment
in time.P

2. The Author Doesn't Understand How Cars Are MadeP

There are a small number of people who think cars are just
produced as soon as you order them from the dealer and
then they're shipped to you. This author seems to think that's
what happens or else he wouldn't be so worried about cars
building up in ports.P
That's what ports are for. Automakers estimate how many
cars they think they'll sell and then they produce that many,
on schedule, and park them outside the production facility.
Then they're taken to a port. Then they're shipped to the
markets where they're sold, the cars are parked, and then
shipped by train and truck to dealerships.4P

Below are parked tens of thousands of cars at Royal Portbury

Docks, Avonmouth, near Bristol in the United Kingdom.

200ft you will see nothing but parked up unsold cars.

They are absolutley everywhere in that area practically

very open space has unsold cars parked up on it.P

The port in question is within about 200 miles of a population
of 45 million consumers and handles roughly 700,000 vehicles
per year. They do not individually unload and ship each car as
that would be wildly inefficient. Instead, they ship many of them,
in boats, and then unload all of them, and then send them to their
various points of sale.P 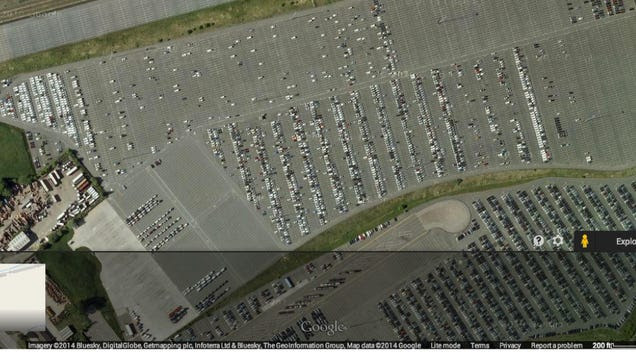 SEXPAND
In the same port you might find containers full of iPhones and
iPads. That doesn't mean there are millions of unsold iPads
and iPhones, that's just how almost all manufacturing has
worked through all of history.P
He does this with the Port of Baltimore, despite the fact that we're
on the way to selling nearly 16 million cars in the U.S. this year.
How do you explain where those cars come from and get shipped
if not in large numbers, using ports?P
One of these rail yards references in the piece, which you can see
here, is barely half full (Europe's car market is still slowly recovering).P

The author also seems to suffer from the illusion, based on
constant references to the date of Google Maps screen
captures, that these are constantly updated satellite
images and not — as is the reality — images (much of
which is actually taken from a plane, not a satellite)
that are, on average, one to three years old.P

The problems then just keep on mounting up. In the end,


alternative but to be either crushed up, dismantled and/or

There's a basic misunderstanding of how cars actually work.
There's a fear here that there are millions of cars just piling
up (there are not) and that these cars, untouched for a few
years, are going to suddenly fall apart.P

When a car is left standing idle, all the oil sinks to the bottom


of the sump, and then corrosion begins to set in on all the


internal engine parts where the oil has drained away.

Cold corrosion is when condensation builds up in the

cylinders and rust forms in the bores. The engines would

then start to seize and would need to be professionally

freed before they could be started. Also the tires start to

lose air and the batteries start to go flat, indeed the

As anyone who works on cars knows, you can often find an
old car that's been sitting for years, give it a new battery, a
little gas, and often get it working. While it's not the ideal
condition, a modern car with new seals and fresh lubricants
can easily sit for long periods of time and be perfectly fine to drive.P
But that's even granting the premise that these cars have
been sitting for years, which they haven't.P

5. The Author Is Conflating The Harsh Winter With

We had a harsh winter and it meant that car sales slowed down,
unpredictably, in the first quarter of the year. Because car
production happens so far in advance of car sales, this meant
a build-up in inventory.P
We measure inventory in "days" that can be generally understood
as how long it takes for a car to be sold. Automakers try to keep
levels at between 60 and 65 days supply. This may seem high,
but companies don't want to run out of cars to sell so they try to
keep a decent inventory available to ship.P

Automakers likely won't curb summer shutdowns like they have in recent years, the result of…Read on detroitnews.​com
Being unable to predict that winter would slow new car sales
below expectations, more cars were produced than could be
sold to keep it at that rate and inventory levels in the U.S.
rose to about 76 days in March before falling to 69 days in
May. Not great, but not terrible (GM's is fairly bad, it's worth noting).P
Automakers will probably idle plants this summer to make
up the difference, depending on how quickly they imagine
sales will rebound.P
The author is conflating this with "channel stuffing," which
is when automakers try to make it seem like they've sold
more of a product than have been purchased by shipping
everything to a distribution center, with the effects of the bad winter.P
Indeed, carmakers do all sorts of dumb things to make it
seem like they've sold more cars, but what you're seeing is
easily explained by first quarter sales and there's no
evidence that we've seen to indicate something
particularly nefarious.P

I just keep re-reading this and wondering how any sane,
intelligent person could believe it. There are so many
weird assumptions here, like the idea that families used
to buy a new car every year and now they don't and that's
why this is happening.P
That's simply never been true. If you look at the stats: At
best, in 1969, the average car on the road was 5.1 years
old. In 2013, the average car was 11.4 years old.P
But mostly, this article lacks any reasoning for how or why.,
as in how are car companies finding the money to produce
millions of unsold cars and why are they doing it?P
The answer is simple: They aren't.P
Even at the height of the recession and the resulting
Carpocalypse, the number of cars sold in the United
States was 10.4 million (in 2009), which is still a ton of cars.P
Bottom line: This is paranoid nonsense that has the tiniest
bits of reality inside of it, like a giant turd sprinkled with truffles.
My advice? Don't swallow it.

here is a link to the original story....click on it to see great
comments and discussion section and more pictures:

Posted by Chloelouise at 8:00 AM