I hope everyone can try these Latkes....they are delicious and easy.


Basically a potato, onion, flour and salt and pepper.....the secret is plenty of oil and the fryingpan hot enough so they cook well in the middle and plenty of space to flip....they end up crispy, flavorful easy and delicious.

Actually, they are even fun--well, I hope you like it and let me know what you think.

In San Diego, Ralphs sour cream is a good buy and it is one of the best tasting.


Potato Pancakes:  This Recipe from Smitten Kitchen is Really Easy and Foolproof

Dear Q Ed: I finally found the recipe.....there are quite a few--basically just like this one if you google latkes.....I followed this one because it seemed simple and only called for one potato....also I just did it really quickly and did not bother squeezing the water out of the potatoes.

It was more about frying them at a temp high enough to cook them on the inside.

I just tried to make them like small pancakes and leave enough space so they are easy to flip, on a med high heat with plenty of oil. I hope you let me know how they come out. 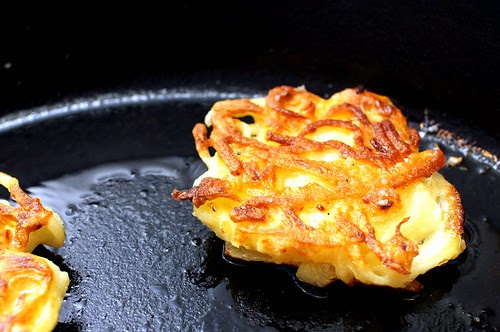 It wouldn’t be Hanukah if I didn’t refresh my favorite, dead-simple potato pancake recipe. But it wouldn’t make for a very interesting story if I told the same one every year; in fact, I think they get better with each try because I continue to tweak themever so much. 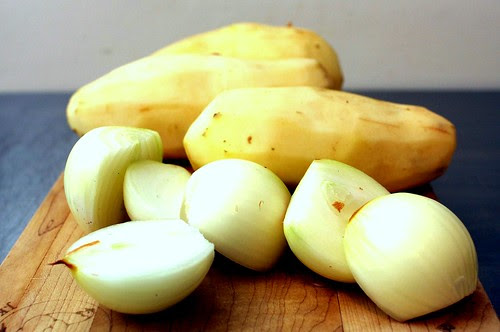 This year, after finally making peace with my cast frying pan (coincidentally, over an “apple latke”) I cooked them in there, and will use no other pan for them as long as I live. It is a browning genius, and even small amounts of oil resulted in no sticking whatsoever. I also realized that I found them a bit on the salty side — something I noted last year and entirely forgot in the 12 months since — I hope to remember that next year. 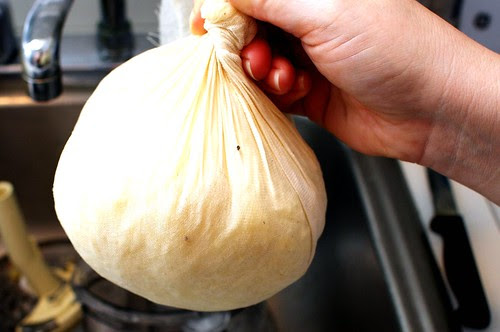 In an ongoing, obsessive effort to create latkes that look precisely like the flying spaghetti monster/tiny piles of rope mops, I again attempted to create the longest strands of potato possible by placing them sideways in the feed tube of the food processor — the food processor not only saves a ton of time, it creates coarser, more visible strands. 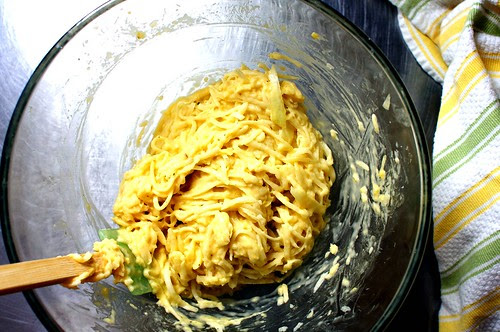 Next, I at last retired the sieve-pressing for a cheesecloth-squeezing. My goodness, I don’t know why it took me so long to realize that cheesecloth does a much better job (seriously, just twist tighter and tighter until the excess liquid is gone) and is ten thousand times easier to hand-wash, uh, because you don’t have to. The smallest square does the trick. 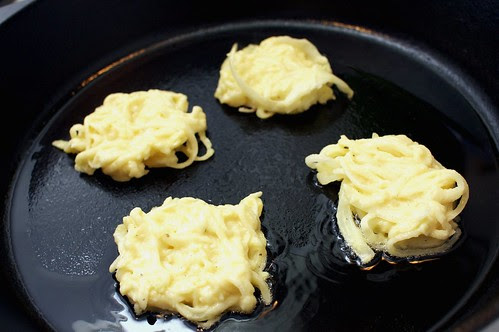 Finally, if you think that latkes are just for Hanukkah, with all due respect, you’re totally missing out. I have yet to see a better “bed” to rest your poached or fried egg upon; home fries, latkes distant, black sheep of a cousin, just weep with jealousy in their presence. And the fact that latkes are so easy to make in advance and reheat/recrisp in the oven means that they can be an especially schedule-forgiving brunch dish. 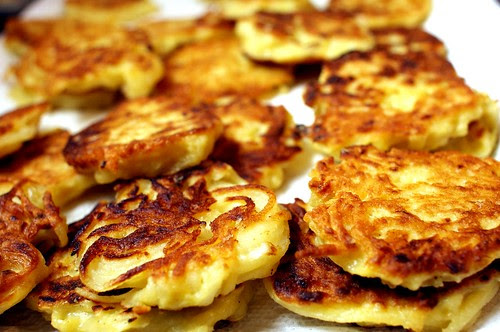 Or an appetizer. I can imagine these being great topped with anything from a garlicky aioli to an apple chutney, but as you can see, we chose to keep them in the “peasant food” mood with creme fraiche and caviar. 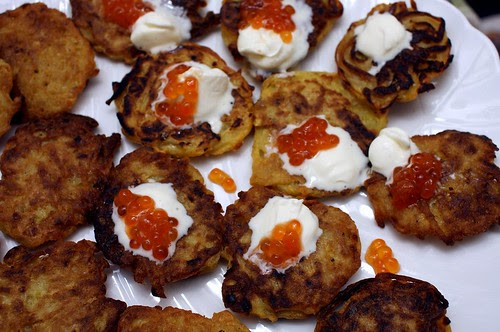 And with that, I’m off to reheat some leftovers. That I didn’t tell our families about when they were over last night. Because I’m nice, but apparently not that nice. 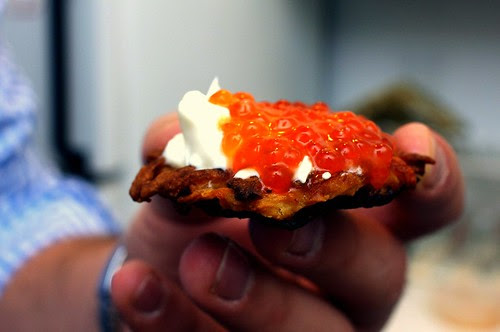 One year ago: A Slice-and-Bake Cookie Palette
Two years ago: Parmesan Black Pepper Biscotti
Potato Pancakes [Latkes]
My formula is roughly this: a one-pound russet or baking potato to one small onion, a large egg, quarter-cup of flour, teaspoon of salt and a hefty pinch of black pepper. How many you yield has to do with how big you make them; I aim for small ones (approximately three inches across) and get about a dozen per batch.
But, if you’re not a formula person, here is a more official-like recipe:
1 large baking potato (1 pound), peeled
1 small onion (4 ounces), peeled
1/4 cup all-purpose flour
1 large egg, lightly beaten
1 teaspoon salt
1/4 teaspoon freshly ground pepper
Peanut oil, for frying
In a food processor or on a box grater, coarsely shred the potato and onion. For longer strands, lay the potato sideways in the chute of your food processor. Transfer to a colander or wrap in a cheesecloth sling, and squeeze as dry as possible. Let stand for 2 minutes, then squeeze dry again.
In a large bowl, whisk the flour, egg, salt and pepper together. Stir in the potato onion mixture until all pieces are evenly coated.
In a medium skillet, heat 2 tablespoons of vegetable oil until shimmering. Drop packed teaspoons of the potato mixture into the skillet and flatten them with the back of a spoon. Cook the latkes over moderately high heat until the edges are golden, about 1 1/2 minutes; flip and cook until golden on the bottom, about 1 minute. Drain on paper towels. Repeat with the remaining potato mixture, adding more oil to the skillet as needed.
Do ahead: Latkes are a do-ahead-er’s dream. You can also keep latkes warm in the oven for an hour or more, if you’re waiting for stragglers to arrive. Cooked, they keep well in the fridge for a day or two, or in the freezer, well wrapped, for up to two weeks. Reheat them in a single layer on a cookie sheet in a 400 degree oven until they’re crisp again. Bonus: If you undercooked them a bit or didn’t get the browning on them you’d hoped for, you can compensate for this in the oven.

click on this link to see Heidi Knapp Rinella talk about Potato Pancakes in Las Vegas...that is how this whole conversation started:


In South Park San Diego we have The Big Kitchen.......Judy the Beauty is there on the weekends.  During the holidays she serves free latkes to passers by.  They are the best--so delicious all anyone wants is more.

Yes, Whoopi Goldberg used to work at the Big Kitchen.

Eating breakfast outside under the trees in the patio, its the best......

Jesus already gave me a Christmas gift this year--yes, it's another beautiful cat.

Posted by Chloelouise at 9:16 AM