My Beautiful Pit Bull Son: News about dogs from the ronnie republic

By BILL DRAPER16 hours ago

KANSAS CITY, Mo. (AP) — For much of the past three decades, pit bulls have been widely regarded as America's most dangerous dog — the favorite breed of thugs, drug dealers and dog-fighting rings, with a fearsome reputation for unprovoked, sometimes deadly attacks.
Hostility toward "pits" grew so intense that some cities began treating them as the canine equivalent of assault rifles and prohibited residents from owning them.
But attitudes have softened considerably since then as animal activists and even television shows cast the dogs in a more positive light. The image makeover has prompted many states to pass new laws that forbid communities from banning specific breeds. And it illustrates the power and persistence of dog-advocacy groups that have worked to fend off pit bull restrictions with much the same zeal as gun-rights groups have defeated gun-control measures.
"Lawmakers are realizing that targeting dogs based on their breed or what they look like is not a solution to dealing with dangerous dogs," said Lisa Peterson, a spokeswoman for the American Kennel Club.
Seventeen states now have laws that prohibit communities from adopting breed-specific bans. Lawmakers in six more states are considering similar measures, and some cities are reviewing local policies that classify pit bulls as dangerous animals.
Pit bull advocates hail the changes as recognition that breed-specific laws discriminate against dogs that are not inherently aggressive or dangerous unless they are made to be that way by irresponsible owners. 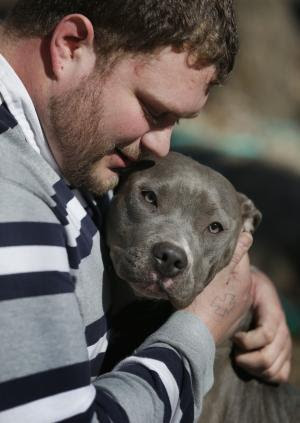 Cameron Younglove plays with a pit bull terrier named Sooke at his kennels near Eudora, Kan., Sunday …
The dogs' foes complain that their message is being drowned out by a well-funded, well-organized lobbying effort in state capitols. The debate puts millions of pit bull owners up against a relatively small number of people who have been victimized by the dogs.
Ron Hicks, who sponsored a bill in the Missouri House to forbid breed-specific legislation, said he was surprised when nobody spoke against his proposal last month at a committee hearing.
"I figured a few parents would be there who would bring tears to my eyes," the Republican said. "Would it have changed my opinion or what I believe in? No."
A version of Hicks' legislation was endorsed by a House committee last month and needs to clear another committee before a full House vote. The state Senate is considering a comparable bill, as are lawmakers in Utah, South Dakota, Washington, Vermont and Maryland.
In Kansas, the communities of Bonner Springs and Garden City repealed their pit-bull bans earlier this year. 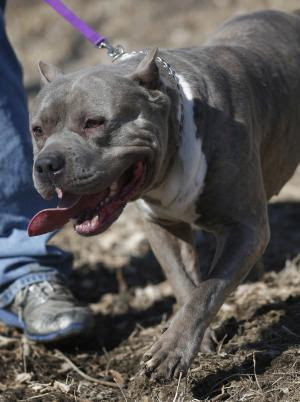 A pit bull terrier named Rizzo gets a walk at Cameron Younglove Kennels near Eudora, Kan., Sunday, M …
Summer Freeman did not know there was a ban when she moved to Bonner Springs last year after a divorce. She panicked when an animal-control officer discovered her pet and told her she had 15 days to get rid of the dog named Titan or move out of town.
"I think of him like my son," she said. "He's my dog-son, I guess you could say. He's at my hip all the time. He's just a big baby that wouldn't hurt a fly."
Freeman was forced to leave Titan at a shelter in Lawrence for nine months until she successfully fought to overturn the law in January.
For dog owners and pit bull opponents alike, the battle is as deeply personal as any gun-control or religious issue. Each side accuses the other of lying, exploiting emotions and using bullying tactics.
Pit bull owners insist their dogs are harmless, loving family members that shouldn't be blamed for something they didn't do. To opponents, they are a volatile breed whose genetics drive them to kill more than two dozen people in the U.S. each year, many of them young children. 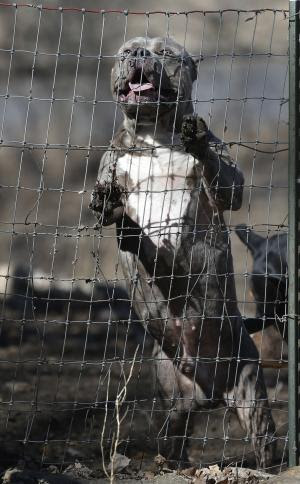 A pit bull terrier named Rizzo gets excited to see his owner at Cameron Younglove Kennels near Eudor …
Popular television shows such as "Pit Boss" and "Pit Bulls and Parolees" on Animal Planet glorify the animals and minimize the tragedies that occur when pit bulls turn on humans, pit bull opponents say.
"Everything is telling us these animals are safe if you raise them right," said Jeff Borchardt, an East Troy, Wis., man whose 14-month-old son was mauled to death a year ago by two pit bulls that tore the child from the arms of their owner, who was baby-sitting. "My son's dead because of a lie, because of a myth. My life will never be the same."
The two dogs that killed Borchardt's son had lived with their owner since soon after they were born, were well-cared for and had no history of aggressive behavior, he said. Both had been spayed or neutered.
That contradicts the contention that only mistreated, neglected or abused pit bulls attack people.
Colleen Lynn, founder of DogsBite.org, pointed to a friend-of-the-court brief her organization submitted in a 2012 case in which the Maryland Court of Appeals declared pit bulls "inherently dangerous." 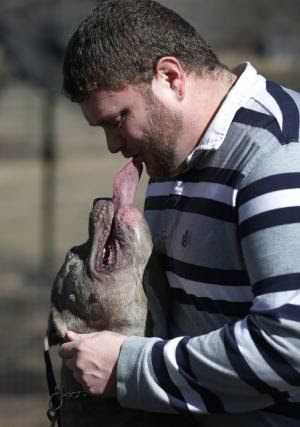 Cameron Younglove plays with a pit bull terrier named Rizzo at his kennels near Eudora, Kan., Sunday …
"Appellate courts agree with us. Doctors and surgeons agree with us. That is credibility right there," Lynn said. "We also have the support of three divisions of the U.S. military, huge, massive bodies in the U.S. government."
The Marines, Army and Air Force all have banned dangerous dogs — including pit bulls and rottweilers — from their bases because of the "unreasonable risk" they pose to safety, Lynn said.
On the other side stand the American Bar Association and National Animal Control Association, which oppose breed-specific laws because they are discriminatory against a type of dog that isn't really a single breed.
Three main breeds — Staffordshire bull terrier, American pit bull terrier and American Staffordshire terrier — along with mixes of those breeds are generally considered pit bulls. But many muscular, square-jawed, boxer-type dogs often are misidentified as pit bulls, making breed-specific bans hard to enforce.
And because fatal pit bull attacks are a rarity compared with other causes of death such as auto accidents, dog advocates argue that breed-specific bans amount to legislative overkill.
"All communities deserve comprehensive dog laws that demand responsible dog ownership and that hold reckless owners accountable when their poor decisions wind up getting other dogs or other people hurt," said Ledy Vankavage, a top lobbyist for the Best Friends Animal Society.
Don Bauermeister, assistant city attorney for Council Bluffs, Iowa, led the effort to pass a local pit bull ban that took effect in 2005. He recalled first reading about the issue in the July 27, 1987, issue of Sports Illustrated, which carried a full-cover shot of an angry pit bull baring its teeth. Across the top, it said "BEWARE OF THIS DOG."
After the Council Bluffs ban went into place, the number of pit bull attacks that resulted in hospitalization plummeted from 29 in 2004 to zero the past few years — proof, Bauermeister said, that breed-specific bans work.
The opposition to pit bull bans, he added, is a sign that many American pet owners have lost touch with reality.
"Fifty years ago, you could take a sick animal behind a barn and put it out of its misery," he said. "That's just the way it was done. Now they would investigate you for doing that. The emotional irrationality of Americans and their dogs has never been worse than it is today."
Related video:

here is a link to the page and the video at the end of the story:

Posted by Chloelouise at 9:13 AM