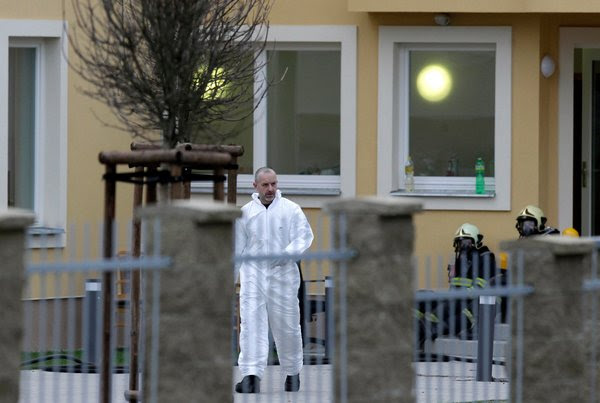 David W Cerny/Reuters
Investigators on Wednesday at the villa in Prague where the explosion took place. The building suffered no damage visible from the outside.

Jamal al-Jamal, the Palestinian ambassador to the Czech Republic, last October in Prague.

The diplomat, Jamal al-Jamal, 56, had been in the Czech capital only since Oct. 11. He and his family were just moving into the residence, and the explosion occurred while he was opening the safe, inadvertently setting off the security protection, according to a police spokeswoman, Andrea Zoulova.
Daniel Langer, the lead surgeon at the Central Military Hospital in Prague, said the ambassador had suffered head, chest and stomach injuries. The immediate cause of death will be confirmed during an autopsy.
An unidentified 52-year-old woman was taken to the hospital from the residence after apparently inhaling fumes from the explosion, but was released soon afterward, said Jirina Ernestova, an official in Prague’s emergency services.
Ms. Zoulova said a police investigation at the residence indicated that the safe itself had exploded because of careless handling that detonated the decoy system.
The president of the Czech police, Martin Cervicek, was quoted by Czech television as saying “we do not have a single indication that this could be a terrorist attack.”
The Palestinian Authority, based in the Israeli-occupied West Bank, maintains missions in a number of European capitals as part of a broader diplomatic effort aimed at advancing the cause of Palestinian statehood. Ambassador Jamal’s death came against a backdrop of difficult negotiations between the Palestinian Authority and Israeli officials over a two-state solution to their prolonged conflict.
The villa where the explosion took place suffered no damage visible from the outside, according to the online service of the Mlada Fronta Dnes newspaper. It quoted neighbors as saying they had heard nothing.
The ambassador’s residence is different from the mission itself, which is in a neighboring villa.
The Palestinian Ministry of Foreign Affairs said in a statement that Mr. Jamal was critically injured by a blast that occurred minutes after he had opened a safe that had been transferred to the new residence from the mission’s old headquarters, and that he was pronounced dead after undergoing emergency surgery at the hospital.
The statement, carried by the official Palestinian news agency, Wafa, added that Palestinian officials were in contact with the Czech authorities, authorizing them to inspect the scene of the explosion, and that a Palestinian delegation would arrive in Prague on Thursday.
Riyad al-Malki, the foreign minister of the Palestinian Authority, said in a statement that Mr. Jamal was “an example of a successful diplomat who was diligent in serving his country and his cause.”
Posted by Chloelouise at 10:15 AM