Six JFK Shooters, Three Tied To CIA, Named–Oswald not among them

Share on facebookShare on twitterShare on emailShare on pinterest_shareMore Sharing Services524

by Sherwood Ross (with Jim Fetzer)

Six shooters who participated in the assassination of President John F. Kennedy, including three with ties to the Central Intelligence Agency (CIA), were named by a prominent critic of the Warren Commission Report (WCR).  Remarkably, Lee Harvey Oswald, the Warren Commission’s lone-assassin-designate, was not among them.
During an interview published this past Nov. 20th in The Santa Barbara Independent, WCR critic/researcher Dr. James Fetzer of Madison, WI, and Chairman of the Oswald Innocence Campaign, revealed the names of five of those who appear to have been shooters, where he has identified the sixth separately:
(1) The first shot that hit, which struck Kennedy in the back, appears to have been fired from the top of the County Records Building by Dallas Deputy Sheriff Harry Weatherford. He used a 30.06 to fire a Mannlicher-Carcano (MC) bullet fitted with a plastic collar known as a sabot, which hit JFK 5.5″ below the shoulder just to the right of the spinal column. This was a shallow wound with no point of exit. 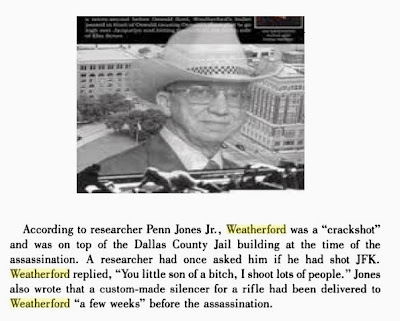 (2) Jack Lawrence, a U.S. Air Force expert, who had gone to work for the automobile dealership that provided vehicles for the presidential motorcade just a few days before the assassination, fired the shot that passed through the windshield and struck JFK in the throat from the south end of the Triple Underpass. 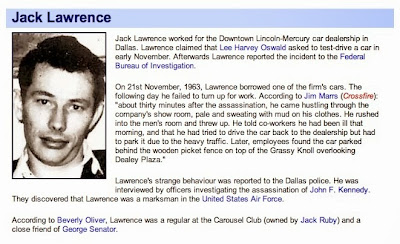 (3) Nestor “Tony” Izquierdo, an anti-Castro Cuban recruited by the CIA, fired the shot that hit JFK in the back of the head after the limousine was brought to a halt. He fired three shots with two misses using a Mannlicher-Carcano, which were the only unsilenced shots fired, from the Dal-Tex Building, which housed a uranium mining corporation, Dallas Uranium and Oil, that was a CIA front. 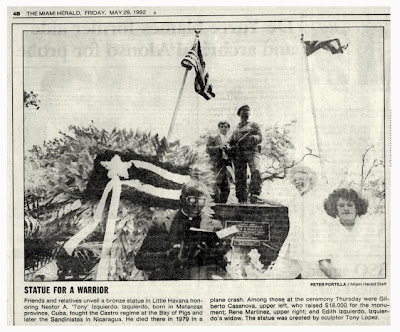 (4) Roscoe White, a Dallas police officer with ties to the CIA, fired from the grassy knoll adjoining the motorcade route, but seems to have “pulled his shot,” Fetzer said, “because it would have hit Jackie, so his shot went into the grass.”  His son subsequently discovered his diary, but gave it to the FBI and it has not been seen since. 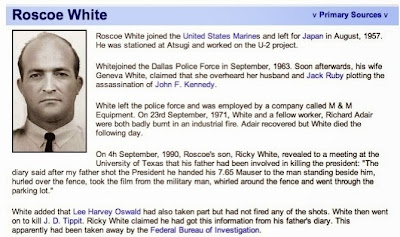 (5) Malcolm “Mac” Wallace, who shot from the Dallas Book Depository, may have murdered a dozen people for Lyndon B. Johnson. “Mac” appears to have fired from the west side of the book depository at Texas Governor John Connally in the mistaken belief he was Sen. Ralph Yarborough, whom LBJ despised. Wallace’s fingerprint was found on one of the boxes in the “assassin’s lair” in the book depository from which Oswald allegedly fired. 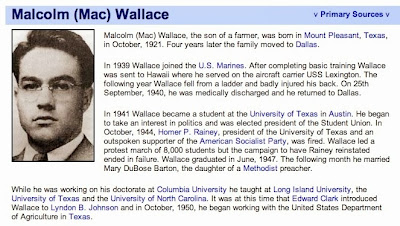 (6) Frank Sturgis, later complicit in the Watergate robbery, who also appears to have been connected to the CIA, is said by Fetzer to have fired from the north end of the Triple Underpass the shot that entered Kennedy’s right temple. Sturgis is known to have ties to Meyer Lansky, a notorious crime syndicate kingpin, and confessed his role to a New York City Gold Shield Detective when he was arrested attempting to kill Marita Lorenz. 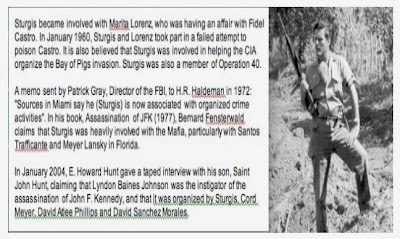 In his interview with the Santa Barbara “Independent,” Fetzer said “there were shooters at six different locations,” with a total of up to 10 shots fired, three of which missed. He asserted JFK was hit four different times: in the back from behind, in the throat from in front, and twice in the head after the driver had brought the car to a halt to make sure he would be killed. Another shot missed and injured bystander James Tague, while “one or more shots hit Connally.” 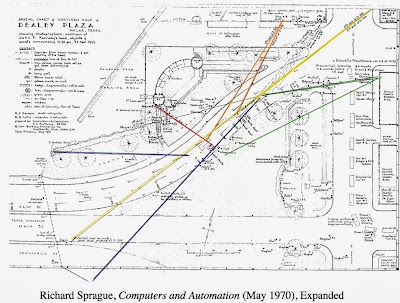 By contrast, the Warren Commission concluded that a single bullet struck Kennedy in the back, exited through his throat and then wounded Connelly. Fetzer explained that the “magic bullet” theory propounded by the Warren Commission is not only false but provably false and not even anatomically possible, because cervical vertebrae intervene.
Ruth Paine, who appears to have been working for the CIA, arranged for Oswald to go to work for at book depository “just weeks before the assassination, which was part of the whole project to set him up as a patsy,” Fetzer said. Right up to the time of the assassination, Oswald was a paid FBI informant, collecting $200 a month, which explains why his W-2 forms have never been released by the government.
As for the motivation to kill JFK, Fetzer noted that he was threatening to shatter the CIA into a thousand pieces, that the Joint Chiefs believed he was soft on communism, that the Mafia was unhappy because Attorney General Robert Kennedy was cracking down on organized crime, that he was going to abolish the FED and cut the oil depletion allowance.
Fetzer said Vice President Johnson, who had forced his way onto the ticket with JFK in Los Angeles in order to succeed him when he would be taken out, “was a pivotal player” facilitating the assassination. LBJ sent his chief administrative assistant, Cliff Carter, down to Dallas to make sure all the arrangements for the assassination were in place.  And his close friend, J. Edgar Hoover, used the FBI to cover it up.

YouTube - Veterans Today -
Fetzer said further there where “more than 15 indications of Secret Service complicity in setting Kennedy up for the hit”: two agents assigned to the President’s limousine were left behind at Love Field; that JFK’s limousine, which should have been in the middle of the motorcade, was put first; that the motorcycle escort was reduced to four and instructed not to ride ahead of the limousine’s rear wheels; and after the first shots were fired, the driver pulled the limo to the left and stopped.
What’s more, Fetzer produced an AP photograph that appears to show Oswald standing in doorway of the book depository at the time JFK was shot. They may be compared with Oswald’s photograph taken later that afternoon in Dallas police headquarters. When questioned, Oswald told Dallas homicide detective Will Fritz that during the shooting he had been standing with Bill Shelley, one of his supervisors, in front of the building. 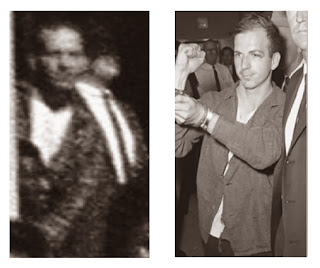 Note the missing left shoulder and the figure who is in front of and behind the man in the doorway at the same time, which are obvious indications the photo has been altered.  Facial features have been distorted, but the clothing is the key. “If you look at the height, weight, build, and the clothing he’s wearing—especially the highly unusual shirt and the t-shirt he has on—they correspond very closely to what Oswald was wearing when he was arrested,” Fetzer said.
For more proof that the man in the doorway (Doorman) was Lee Oswald, visit the Oswald Innocence Campaignon-line. While they altered features of Doorman’s face, the only other candidates for having been there were not wearing comparable clothing or did not fit the height, weight and build of the man in the doorway.  When you consider the totality of the evidence, no alternative explanation is reasonable.
“Guns and Butter: The Assassination of America, Part One“
“Guns and Butter: The Assassination of America, Part Two”
In his Santa Barbara Independent interview, Fetzer said public opinion polls “have shown over the years that as much as 85 percent of the public has expressed disagreement with the Warren Commission and the lone assassin theory.” Fetzer elaborated on the points he made in great detail during his keynote address, “The Assassination of America”, for the Santa Barbara JFK conference that he organized and moderated, which is now available at jfk50santabarbara.com.
Fetzer is a former Marine Corps officer who earned his Ph.D. in the history and philosophy of science.  He has published 29 books, including three collections of studies by experts on different aspects of the assassination. Distinguished McKnight University Professor Emeritus at the University of Minnesota Duluth, he is also an editor for, and contributor to, Veterans Today.
Sherwood Ross is an award-winning reporter. He served in the U.S Air Force where he contributed to his base newspaper. He later worked for The Miami Herald and Chicago Daily News. He contributed a weekly column on working for a major wire service. He is also an editorial and book publicist. He currently resides in Florida.

here is a link to see some of the very interesting comments--a little different from most publications...
http://www.veteranstoday.com/2013/12/28/six-jfk-shooters-three-tied-to-cia-named-oswald-not-among-them/

Posted by Chloelouise at 9:26 AM