Jason Evans Filling Us In on The Latest Blacklist: The Alchemist 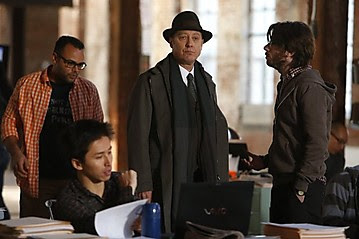 Scene from “The Blacklist.”
NBC

okay...here is my thing on the show but what do you think....the comments are very good on the WSJ website...

I am sure this is a Rosemary's Baby type plot.  Alan Alda represents evil trying to takeover the world and I think Tom and Audrey are his affiliates.  Because Tom looks too clean and innocent but maybe with a touch of a hidden agenda, we will see glimpes of him being a bad person connected to these forces.  Just when we are convinced he is good it will be an Oh, my gosh situation when we see his true nature--but it may be confusing for a long time.  Also, Tom and Audrey are there to control and keep tabs on Lizzie and Ressler--they could be romanticaly involed eventually.  Red is good in the long run....he was initially abducted by the Alan Alda group, they harmed his family, and had to follow their orders but soon he will have his day saving Lizzie from harm and to redeem his life.  Perhaps Malik will become his love interest...working together for world good.  Because Malik is very good and stong in her role I cannot see them getting rid of her.  Alan Alda reps evil but I just cannot figure out his base....Satan, new world order, alien, etc. We will be surprised to see how many people are really involved in the evil group.   Well, what do you think....
Posted by Chloelouise at 7:23 AM