So honored to have Elvis Presley biographer, Alan Hanson on my blog--I could not resist asking him about Phil Everly and his possible influence on Elvis.

The Everly Brothers couldn't have been an early influence on Elvis, since Elvis already was a huge star by the spring of 1957, when the Everlys had their first hit, "Bye Bye Love." I've never heard of Elvis saying anything, positive or negative, about them. Both sang a mix of rock songs and ballads, although I'd say Don and Phil are best known today for their ballads, while Elvis is best known for his rock 'n' roll stuff. Their singing styles were quite different, of course. The Everly Brothers used two-person harmonies, while Elvis was primarily a lead vocalist. Occasionally, Elvis would sing duets that can be seen as similar to the Everly Brothers style, such as on "All Shook Up" and "Good Luck Charm," on both of which he sang with Gordon Stoker of the Jordanaires.

My mother was only 19 when I was born, so she was young enough to enjoy pop music in the mid-1950s. I distinctly remember that "Bye Bye Love" was one of the 45 rpm records she had and played on her portable stereo. She never bought an Elvis record, though. Once I became an Elvis fan in 1962, I made sure she, and everyone else in the family, heard a steady diet of Elvis music until I went away to college. I also enjoyed the Everly Brothers when I was a teenager, and I still do today. I think I have about a dozen of their songs on my iPod today.

Thank you, Alan, for telling us about Elvis and the Everlys.

here is a link to a post on the Ronnie Republic featuring Alan Hanson and Elvis Presley: 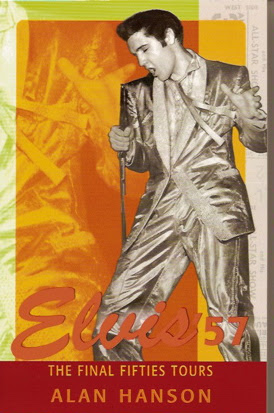 Posted by Chloelouise at 8:02 AM