Yesterday, Ann Coulter betrayed yet another friend, this time leaking an embargoed report given to her by “someone.” Coulter is a repeat offender. In 1997, Coulter devastated the life of Paula Jones and her family when she leaked attorney-client privileged information against the best interest of her client.

Details of Coulter’s treachery are available in the free book, Vanity: Ann Coulter’s Quest for Glory, at www.coulterwatch.com/vanity.pdf.

Additional reasons for never trusting Coulter are provided in the free book, Never Trust Ann Coulter – at ANY Age, at www.coulterwatch.com/never.pdf. 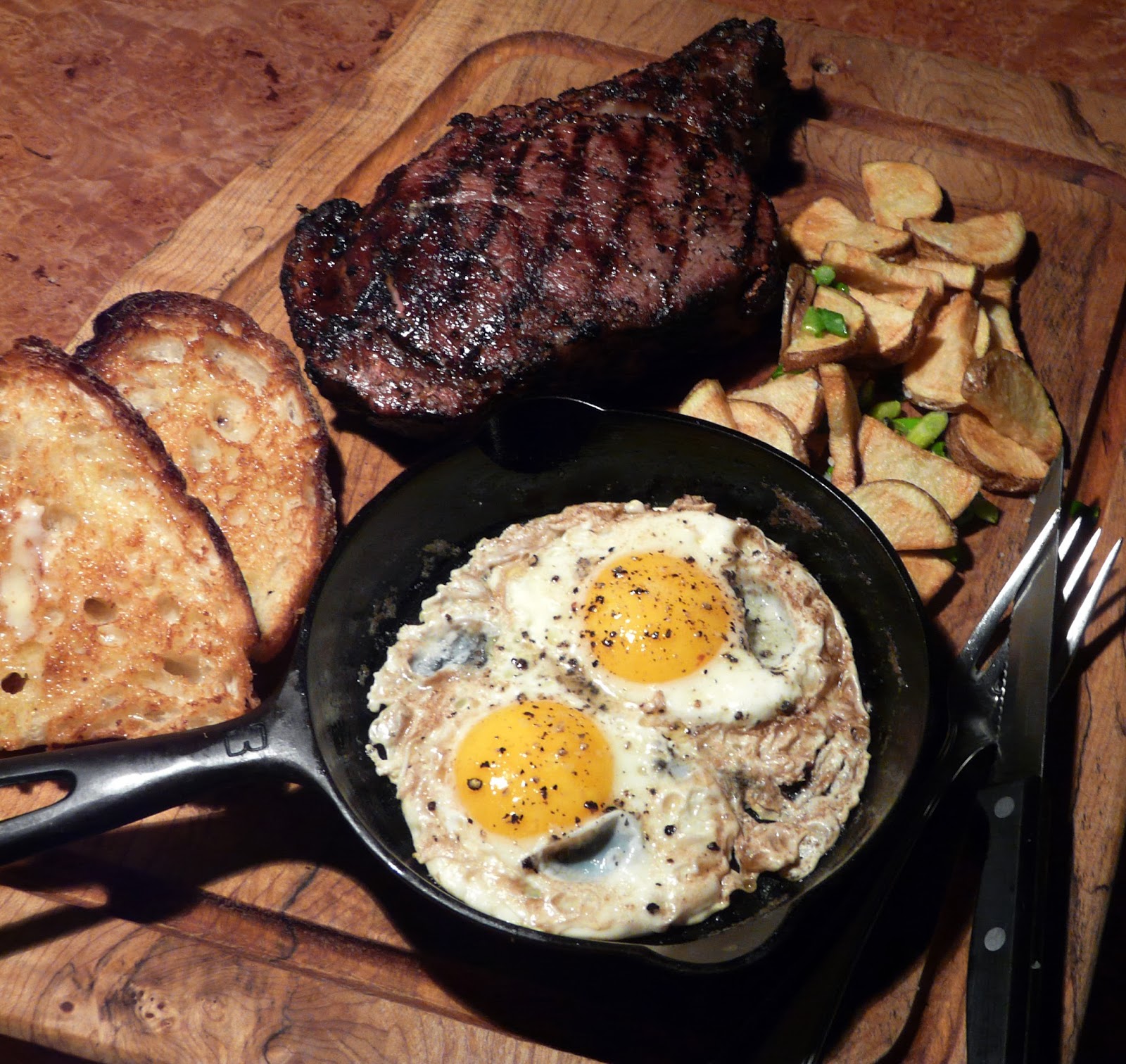 Posted by Chloelouise at 12:41 PM No comments:

Thibeault's Table: Just about my favorite blog of all time

More from Thibeault's Table
Posted by Chloelouise at 11:01 AM No comments:

Posted by Chloelouise at 9:15 AM No comments:

Ann Coulter has betrayed another friend!
In this week’s column, Coulter provides telling information for the immigration debate. But, in the process, she drew heavily from an Eagle Forum report which has yet to be released to the press. That report was embargoed, meaning the media was prohibited from using it until it is released by the source.
Coulter admits her wrongdoing even as she does it – and she defends it by claiming she knows best. In her opening paragraph, Coulter calls it a “stunning report” and admits it “is still embargoed.” She justifies breaking their story by claiming, in her infinite wisdom, that “it’s too important to wait!”
This is not the first time Coulter has engaged in unethical behavior. In 1997, she leaked attorney-client privileged material to betray her client to the detriment of her client (see Vanity: Ann Coulter's Quest for Glory). This is typical of her behavior throughout her media career (see Never Trust Ann Coulter - at ANY Age).
It would behoove whoever “slipped” Coulter a copy of the report to question Coulter’s integrity and reconsider whether she can be trusted. Coulter cannot be trusted.


for more information here is a link to the website of the Eagle Forum:

Posted by Chloelouise at 8:46 AM No comments:

Posted by Chloelouise at 7:46 AM No comments:


translated on google translate
Posted by Chloelouise at 3:50 PM No comments:

Posted by Chloelouise at 2:58 PM No comments:

PRISM Through Prism of Constitution

As a pro-defense conservative, I have my serious doubts about the legitimacy of NSA’s PRISM and related programs which gather a massive amount of private information on all Americans and clearly (in my view) violates the Constitution.
We are told that there have been no reported abuses of these programs. Who would know whether they have been illegally targeted? It’s a secret program, after all. If Snowden had not leaked some of the information he fraudulently obtained, we would to this day have no knowledge of his crimes.
The Constitution and Bill of Rights were expressly designed to limit and diffuse the power of the federal government through enumerated powers, various checks and balances, and clearly defined civil rights protections for the citizenry.
The argument that the government should intercept and maintain telephone and email communications on all Americans because telephone companies and Internet providers already possess that information is farcical. It is part of the job of those companies to maintain certain records for their customers, as required by law.
Overlooked in all the dissembling on this critical privacy issue is that the private sector does not possess the coercive power of government. Moreover, those businesses actually act as a buffer between individuals and the government.
One primary reason for requiring the government to issue individual (and not blanket) warrants in specific instances is to keep the government from abusing its power. That was the Framers primary concern and it should be ours as well.

from Daniel Borchers at www.CoulterWatch.com

President Obama: Are you ready for O'Reilly

Good job--that is O'Reilly's and Hannity's favorite game--why won't you just answer the question when the premise of the question is ridiculous.  I am guessing President Obama may be on to this since he is the President and pretty good with words himself.  The other false premise...the folks.  Remember, this is from someone who just discovered Pandora......Bill often says he is the only one looking out for the folks.  Bill fails to take into consideration the folks elected President Obama twice.  Could Bill's folks actually be the 500 dollar ticket payers for the meet and greet portion of his bolder and fresher gig, as it was here in San Diego.  The regular tickets were about 100 dollars.  I am afraid Bill may live in a slightly smaller world mentally than President Obama but he certainly does not want anyone to tell him that.

TV Columnist@blowryontv
Dear President Obama:
You might not realize this, but ever since it was announced that Bill O’Reilly would interview you again on Super Bowl Sunday, he’s been strategizing – sometimes on air – about how best to conduct the conversation.
And while I suspect you have handlers who are charged with preparing you for these bouts, most of them probably aren’t as familiar with the tale of the tape on an unpredictable foe like O’Reilly as I am.
For starters, while this might be just another interview for you, it’s a major event for Bill, especially since this might be his last crack at you during your presidency, and almost certainly his last exposure on this sort of vast stage for several years.
Moreover, O’Reilly will relive this moment by chewing over, analyzing and running clips for days to come. (Just to make sure the reviews are good, he’ll enlist sycophants like Bernard Goldberg and Dennis Miller to reassure him how great he was.)
O’Reilly not only does this sort of thing every day, but he takes pride in presenting himself as the kind of hard-nosed reporter and surrogate for “the folks” who won’t give you a pass, unlike all those mainstream news outlets. And because he does have a way of interrupting and saying unexpected things, he can easily put even a skilled communicator off his game.
So if you want to survive an O’Reilly interview without him laying a glove on you — from the president on down to an ordinary guest — here are some steps to follow:
Flatter him. (Key phrase: “I respect what you do.”) Like a lot of news talent, O’Reilly has a healthy ego. He’s just a bigger, more exaggerated version – Papa Bear, as Stephen Colbert puts it. Getting an “atta boy” from the President of the United States can’t help but turn his head a little, even if many of his viewers see you as a socialist who is secretly trying to destroy America.
Establish rank early. (Key phrase: “Please let me finish my thought.” Repeat if necessary.) OK, this one obviously doesn’t apply to everyone. O’Reilly does a nice job keeping guests off balance by interrupting them. You’ll have to remind him – a few times, probably – that you are the President of the United States, not some professor from a liberal-arts college he booked as a straw man to slap around.
Don’t accept the way he frames issues. (Key phrase: “The premise of your question is flawed.”) O’Reilly has a way of presenting things as if they were conventional wisdom – like the fact he speaks for “the folks” – when they’re often open to debate. Knock him off stride by reframing the conversation, then asking him to defend a line of attack meant to put and keep you on the ropes.
Find common ground. (Key phrase: “You have critics, Bill. Is everything they say about you true?”) O’Reilly is terribly sensitive to criticism, which is why raising the issue of critics will put him on his heels. Bill can’t stand the fact some guy at Mediamatters.org sends out emails detailing his excesses; imagine how he’d feel if the entire Republican Party and 30 think tanks were devoted to it.
Do not joke with him. This is very important. Bill O’Reilly thinks he can be funny, but he has very little sense of humor when it comes to himself. So as much as you might see an opportunity to share a laugh, odds are he’ll see that as obfuscation or a stalling tactic. If you’re going to try to tell a joke or lighten things up, save it for the very end.
Do not lump him in with Fox News. Although he has spent 17 years living adjacent to Sean Hannity, O’Reilly considers himself a very different animal from that sort of raw partisanship. On Wednesday, for example, he endorsed President Obama’s push to increase the minimum wage — and chided Republicans for not getting behind the idea.
So if you say anything about Fox News – and he’s likely to ask, given how indignant the network was about comments pertaining to the network in your recent New Yorker interview – be clear that you are referring to the most ardent partisan voices on Fox, not him.
About that “last word” he’ll promise you… While Bill might say, “I’ll give you the last word,” trust me, you will not get the last word.
Bottom line: His show; his rules. And incidentally, if members of your staff didn’t come up with a list like this, then they’re not looking out for you.
from variety.......

Posted by Chloelouise at 9:09 AM No comments: 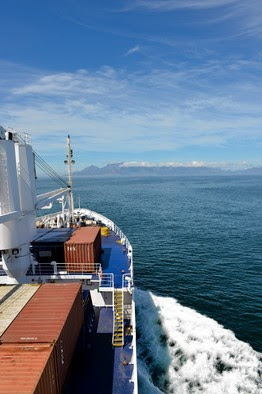 SHIP TO SHORE | A view from the RMS St Helena, which travels between Cape Town, St. Helena and Ascension Island in the South Atlantic Ocean. Alamy
WHEN THE CARGO liner CMA CGM Figaro comes into New York Bay, she does so with shipping containers stacked high on her deck, like enormous Lego bricks. From shore, one can only guess at what she's carrying. Electronics from Yokohama? Maybe. Clothing from Hong Kong? Possibly. A swimming pool and a few paying passengers? Very likely.
The pool is pretty much where the similarities with a traditional cruise begin and end. A mega-liner like Royal Caribbean's RCL +2.49% Oasis of the Seas can carry more than 6,000 passengers; most freighters (if they take guests) top out at about 12. There is no rock wall. No spa. Cabins, though they tend to be spacious, are utilitarian (imagine yourself on the SS IKEA). Instead of a dozen restaurants operating around the clock, cargo ships have officers' dining rooms that serve meals at appointed times.
For some, the appeal of freighter travel is the prospect for a "Fantastic Voyage"-like journey through the arteries of global commerce. Others like the idea of seeing little-known destinations, like Pago Pago in American Samoa, or relish the opportunity to read and write in near isolation. (Internet connectivity, via satellite, is limited at best.) And unlike with a traditional cruise, it is often possible to arrange passage over just a segment of a ship's route—for instance, if you wanted to get to Europe without flying.
Even the shortest leg, however, requires both time and flexibility. A 20-day voyage might come in at 19 or 22, as commerce and weather dictate. Rates start at about $130 a day. Working with a specialist travel agent is not just advised, it's pretty much mandatory.
Cargo ships travel the world without consideration of tourist season or how sandy nearby beaches are; if there is a deep port there is probably a ship to get you there. Click the mapto view a few of the more compelling trips available.
View Graphics 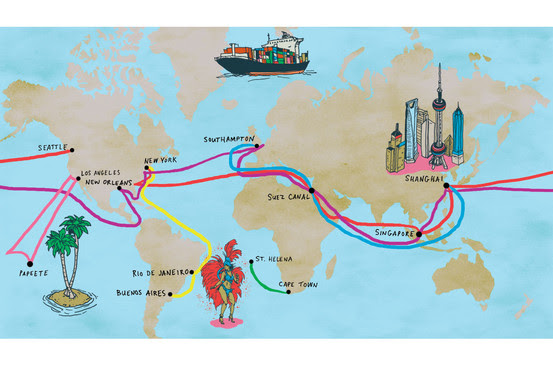 Illustration by Michael Byers for The Wall Street Journal

copied from the wsj
Posted by Chloelouise at 8:33 AM No comments: