The Case of the Vanishing Angel Priest of the Missouri Highway.......

The riddle of the 'angel priest': Holy man appeared from nowhere to pray with trapped girl and rescuers in traffic accident, told them she would be OK and then vanished


526
View
comments
Pinned inside her mangled Mercedes, seriously injured and fading fast, Katie Lentz turned to her rescuers on the lonely open stretch of Missouri highway and asked them to pray.
Struck head-on by a drunk driver on Sunday morning, emergency workers had been battling for an hour and a half to free Lentz, but to no avail.
But as they joined hands a Catholic priest appeared, even though there were no bystanders and the road was blocked, who offered a prayer and an instruction to the rescuers that they would now be able to free her.
Suddenly, heavy equipment needed to cut through the metal arrived from a nearby town and Lentz was pulled from the wreck in time to be saved - but when they turned to thank the priest, he was gone.
Scroll Down for Video 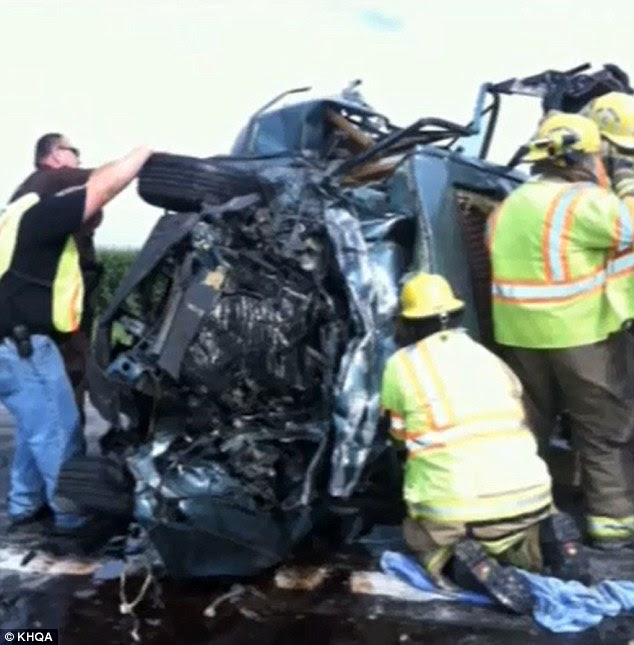 Mangled Wreck: Emergency workers were struggling to save Katie Lentz when she was hit head-on by a drunk driver on Highway 19 near to Center, Missouri 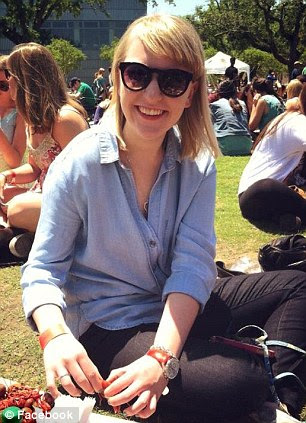 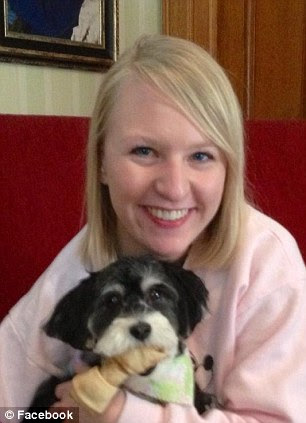 Prayer: When emergency workers could not free her - Katie Lentz asked them to stop so that a prayer could be said 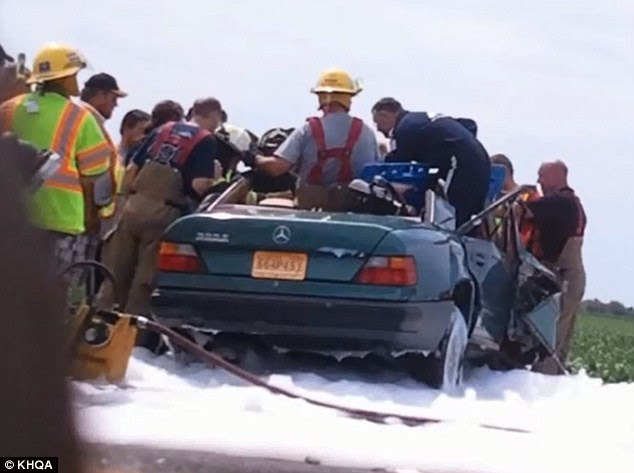 Effort: The desperate effort to save Katie Lentz was blessed by a Catholic priest who appeared from nowhere and just as mysteriously vanished
'He came up and approached the patient, and offered a prayer,' Chief Raymond Reed told KHQA-TV.
'It was a Catholic priest who had anointing oil with him. A sense of calmness came over her, and it did us as well.
'I can’t be for certain how it was said, but myself and another firefighter, we very plainly heard that we should remain calm, that our tools would now work and that we would get her out of that vehicle.'

That is when officers from the neighboring Hannibal Fire Department arrived with their jaws-of-life and Lentz was pulled to safety and put into an air ambulance to hospital.
Turning to thank the guardian angel who had arrived from nowhere at their lowest ebb, the emergency crews could not find him.
The highway had been blocked for a quarter of a mile each end during the hour and a half rescue and no bystanders and parked cars were anywhere near the crash site on Highway 19 near Center. 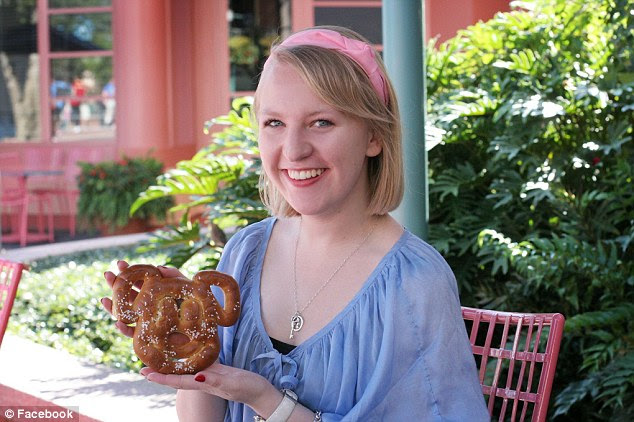 Divine Intervention: Katie Lentz was saved after emergency workers from Hannibal fire services arrived with heavy duty cutting equipment
'We would like to find this gentleman and be able to thank him,' Reed said.
'As a first responder, you don't know what you're going to run into. We have a lot of tools, and we have intensive training.
'In this particular case, it is my feeling that it was nothing more than sheer faith and nothing short of a miracle.'
Lentz suffered several broken bones to repair her legs, but her friends and family say that her spirit has been boosted by the apparent divine intervention.
'Both of her legs are very damaged,' Lentz's friend Amanda Wiseman said.
'Her wrist is broken, several broken ribs, so she's had a lot of broken bones to deal with.' 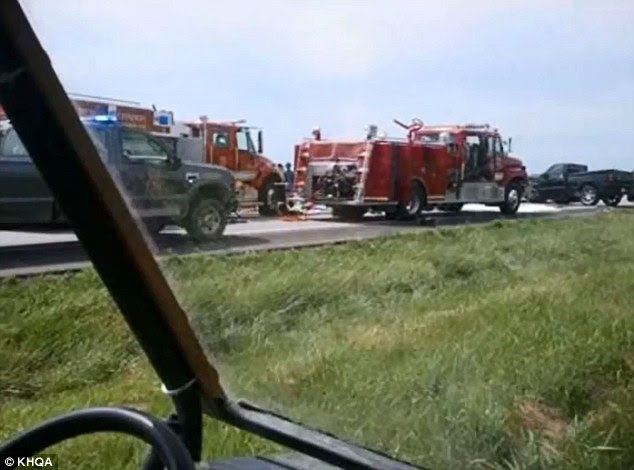 Scene: Dozens of emergency workers battled to free Katie Lentz as she lay pinned in her Mercedes wreck on Highway 19 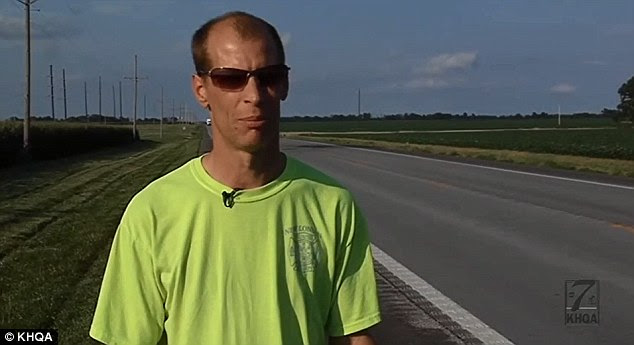 Chief Raymond Reed said that the Catholic priest made everyone including Katie Lentz calmer before the jaw-of-life appeared from Hannibal
Chief Raymond Reed said rescue crews were struggling to cut through the strong metal of Lentz's Mercedes.
'It was a very well-built car, and when you compact materials like that one, they become even stronger because you're cutting through multiple things instead of one layer,' Reed said.
Reed says Lentz was pinned in between the steering wheel and the seat and the prayer was offered just as he was told by the paramedics that Lentz was failing.
'Where did this guy come from?' Lentz's friend Travis Wiseman asked.
'We're looking for the priest and so far, no one has seen him. Whether it was a priest as an angel or an actual angel, he was an angel to all those and to Katie.' 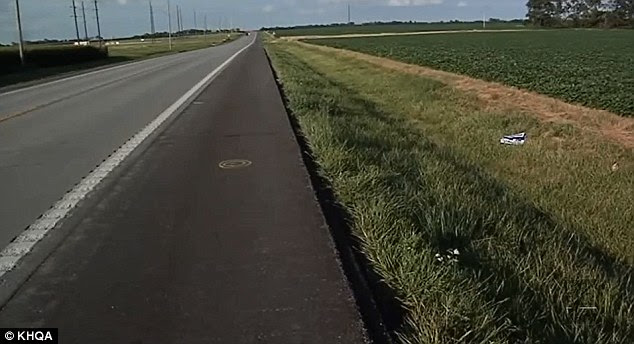 Empty Stretch: The road was closed for a quarter of a mile either side of the crash and there were no bystanders
The driver of the other car in that accident, Aaron Smith, has been charged with a DWI, second degree assault and failure to drive on the right half of the roadway.
There are several Catholic churches in the area to Highway 19 - the nearest being St Paul's - however, the mystery priest has still not come forward.
Do you know the guardian angel priest of Highway 19? If so, call 646 885 5149

Years ago,my van broke down and a man in a pick up truck pushed me into a hugh parking lot and got out of his truck and opened my passenger door.  When he saw I was pregnant, he said "Oh, I didn't know you were like that!" He then proceeded to look under hood and tell me it was the such and such and it couldn't be fixed there-I would have to go with him to get assistance. At that moment, this other man appeared and asked if he too could help. The first man quickly said "oh, let me go then " and jumped in his truck and drove away. I turned to the second man and he said "there is no such part as he told you in an engine. I looked away to watch the truck leave and when I looked back at the second man, there was no one there...I swear to God...I stood outside my van and looked around the entire hugh parking lot and there was no one there.  My van easily started and I went home. Hours later, I realized what had happened and how lucky I had been.  A few months later, a man fitting the description of the first guy was in the paper-he was found to be raping and killing women under the guise of fixing their cars when they wouldn't start. That was when I realized how generous God had been - to let me go home to my 2 small children and carry my 3rd. You can all be skeptical but I know what I experienced.
Posted by Chloelouise at 8:48 AM No comments: