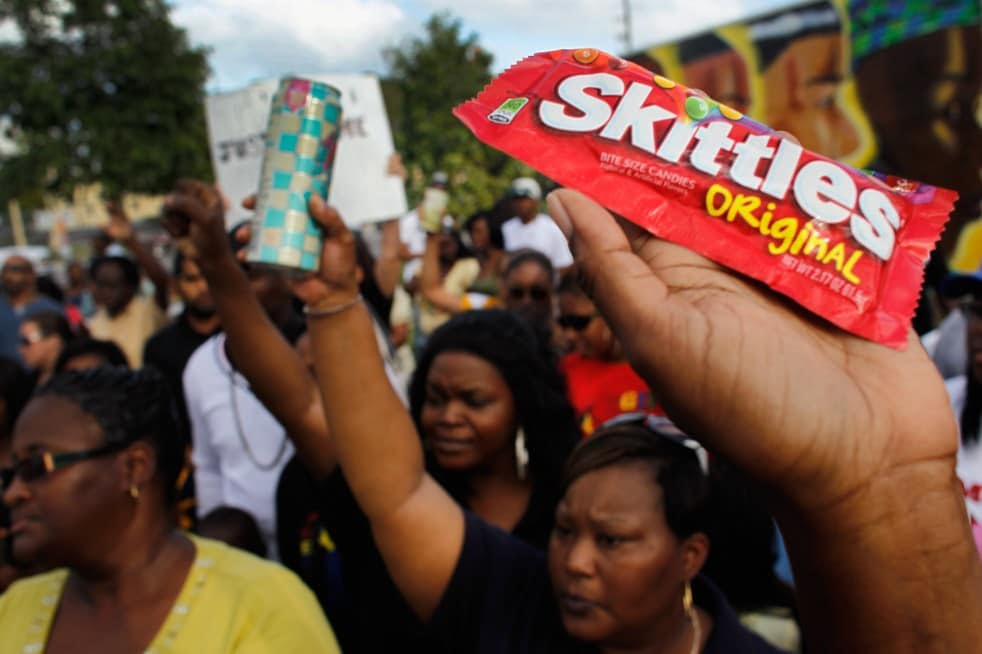 Trayvon Martin supporters (Joe Raedle / Getty Images)
In a discussion of race and the George Zimmerman case on last night’s “O’Reilly Factor,” Fox News host Bill O’Reilly thought he’d come up with a revealing statistic. A resounding piece of data. A mind-blowing number. A jaw-dropping factoid.
The cable-news king was chatting with the Rev. Jacques DeGraff and citing the problem that “overwhelmingly violent crime in this country is generated by young black men. Am I wrong?” DeGraff took issue with the suggestion that somehow violent crime was in the DNA of young black men, noting that “certain conditions” and geography play a role in the problem.
Then O’Reilly unsheathed his data point:

DeGraff responded that “most crimes are committed by people from the ethnic group of the perpetrator.”
And how! Have a look at this report from the Bureau of Justice Statistics. From 1980 through 2008, 84 percent of white murder victims were killed by whites; 93 percent of black murder victims were killed by blacks. So just how unbelievable does O’Reilly’s statistic appear now?
As the discussion rolled on, O’Reilly bashed the media a bit: “There is no way on earth this trial should be getting this much coverage. And the only reason it’s doing it is because it’s a light-skinned Hispanic against a black kid.”
Funny thing: The Erik Wemple Blog seems to recall some recent “O’Reilly Factor” segments on the trial. This is one host who understands where his ratings are coming from.
...............................
love it---I saw it to and wanted to write it for my blog, but of course yours is excellent--I'll use yours if you don't mind.
Not that long ago he tried to tell an African-American individual  Robert L. Johnson, founder of BET, that the reason some people in the the Black community had difficulty in the work place was because there was a performance issue and he had statistics for that, too.
Keep in mind, this is someone who does not want the government to pay for any kind of sensitivity training for other cultures or any group of Americans.  Bill, wake-up, look around--this is America.
He knows everything.  I called him an Ugly American and it seems like the title fits.
A few years ago I was a school nurse at a 6th grade school with kids from Bario Logan.  The 12 year old boys were constantly beat up for gang affiliation.  Can you believe it.  I was shocked and I have lived in San Diego forever.
Point being--would this happen to the kids in the white community--I don't think so.  Would this happen to Bill's kids at school.  Would he stand for it?
What does the 12 year old kid do about it.  Many of the parents had low-income jobs, for instance,  at two taco shops, to meet expenses, no phone and were Spanish speaking.
You notice Bill rarely has any one on he cannot run over, or in the case of Robert L. Johnson, he simply refused to take in the information, except for the time he had on Bill Clinton and he conducted himself in a completely different way.  Well, it's his show and I guess that's why people like Wesley Clarke would not go on it.
Bill O'Reilly, the ugly American strikes again.....

here is Bill explaining the facts to Robert L.
http://theronnierepublic.blogspot.com/2013/05/bill-oreilly-ugly-american-and-why.html

Posted by Chloelouise at 1:37 PM No comments: