Posted by Chloelouise at 10:26 AM No comments:

Talking About Mick Taylor...Good Lord Bring Mick T. Back To The Band!

Talking About Mick Taylor...Good Lord Bring Mick T. Back To The Band!

Right, if you read comments talking about Mick Taylor of the Rolling Stones they all say things like that....but that is my all time favorite, direct and to the point....it sums it all up.

here are some more reviews, copied from micktaylor.com.....

Reviews of Mick Taylor’s performance with the Rolling Stones at the London O2, November 2012

Last Sunday (25th November) saw Mick Taylor join the Rolling Stones on stage at the O2 Arena in London to play their late-60s favourite, “Midnight Rambler”. The show received rave reviews in the press this week. Here’s some that highlighted Mick’s contribution to the fantastic evening.
Billboard “Perhaps the unique highlight, …came when Mick Taylor, the guitarist who helped change the very fabric of the Stones in just five years with them from 1969, rejoined for an exciting, epic version of “Midnight Rambler.” The grins and pats on the back from Messrs Richards and Wood were heartfelt proof that it was pretty special for them too.”
The Independent ‘’…Mick Taylor summoning up the band’s golden era on a lengthy “Midnight Rambler”, his stinging lead lines locking well with Jagger’s blues harmonica and the tight interplay of Keith and Ronnie’s guitars. For seven minutes or so, the years fall away and it seems as if the group were still at the cutting edge of pop…’’
BBC News ‘’…Comedian Noel Fielding, who was in the audience, told the BBC, “Mick Taylor… What a genius.’’
Guardian “… guitarist Mick Taylor, whose guest spot on Midnight Rambler is really thrilling …”
Daily Telegraph “… guitarist Mick Taylor greeted like a returning God ..”
Rolling Stone Music ‘’…the biggest cheers came for Taylor, who hasn’t been a Stone since 1974 – he played trademark blues guitar solos on an extended version of “Midnight Rambler” and looked like he was enjoying every second of the reunion.’’
The Mirror ‘’During his time with the band, Taylor played on some of the Stones’ most popular albums including Let It Bleed, Sticky Fingers and Exile On Main St. And there was no doubt the fans appreciated his special place in the history of the band – reserving for him a rapturous reception as he shuffled on stage and performed on Midnight Rambler. The 63-year-old conjured up a virtuoso performance that had the O2 Arena enthralled.’’
Financial Times “… Best of all was the arrival of Mick Taylor to play bluesy slide guitar on an elongated “Midnight Rambler”. The presence of the guitarist who played with the Stones in their ’69-’74 pomp seemed to trigger something in Jagger, who proceeded to attack “Brown Sugar” with wild gusto, before appearing in a black cloak for a lip-smacking version of “Sympathy for the Devil”
CBS News ‘’There was a stunning guest appearance by former Stone Mick Taylor, who stole the show during a searing performance of “Midnight Rambler…”
Posted by Chloelouise at 10:23 AM No comments:

I tried to capture the look and feel and the sound of this fountain. Everyone was really having a good time. It is a tranquil setting and I think it has complete design balance. The set slide show takes about 5 minutes. The Gran with the kids was telling me how much she admired Diana and she felt Diana would be here in spirit for the wedding. She also loved William and Harry and Kate.

These pictures were taken approximately 2 years ago right before the wedding of William and Kate. Hyde Park has so many beautiful fountains--they are all very interesting and different. There is a very nice and affordable cafeteria type restaurant there, as well.

On Google Maps it is real easy to zoom in on all of these areas and plan an easy walking tour of Hyde Park.  The tube stations are easy to see, as well.

The Serpentine Bar and Kitchen in Hyde Park

We're open no matter the weather so if you need a quick coffee on way way through the park, or are looking for somewhere to meet friends for brunch on a Sunday there really is no better place to sit back, relax and enjoy the view - whatever the weather!

To see our breakfast menu and all other menus, click here.

Please check the website of The Serpentine for exact prices and location as there are many places to eat in Hyde Park but this is particularly nice with the swans by the lake.....affordable or expensive....this can mean anything in London.....

A little price warning so as not to be surprised on the charge card bill later.....

A cup of coffee for one and a rest at a relaxing chair by the lake while enjoying the view of the swans is one thing but a large lunch for two can easily become very pricy in London....basically I just consider everything to be doubled by the time I see it on my charge card and who likes a surprise like that.....talking about the US dollar to the pound.

I'm just saying it is a lot less expensive when I go alone as compared to buying lunch and a glass of wine for the two of us if I bring my daughter on my vacay.....having said that it is much more fun for me when we go together....you know what I mean.......

and the link to google maps:

Bold, Beautiful and Brilliant--This Might As Well Be Called The Christiane Amanpour Show 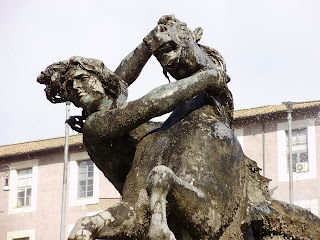 Bold, Beautiful and brilliant--this might as well be called the Christiane Amanpour show, and rightly so.

Yes, I always like to watch all of the other contributors to Anderson's new nightly forum:  Jeff Toobin, Amy Holmes and a guest.....they are all very talented and admirable, but they are only distractions compared to the loud, factual, arm-waving and ultra self-confident Amanpour.

What do women want....I want to be Christiane Amanpour!

Now, here is my plan....the so-called "guest" will be bill o'reilly and my liberal fantasy will come true. Oh, I can't wait to see her get a hold of that guy--he'll try to "spin it" and she'll show him what "no spin zone" really means--he won't be able to get a word in edge-wise.....