Chloe Louise · San Diego, California
Hope you don't mind--putting your nice comment in my blog--the ronnie republic--I think I have seen every one of Huell's shows. I have been to several of his recommendations--I love a road trip in sunny southern California and discovering an interesting place--I can usually bring my dog. it's not too crowded and I learn new information. I will really miss Huell's interesting shows and friendly style. He really had the interview knack of mirroring the statement back to the person and the art of the pause down to a science. The best thing about his interview skills was conveying sincerity and enthusiasm with very few words. If one notices his interview he strategically directs the conversation to reveal the true meaning of the place as told by the citizens or the docents who actually work at the site. He is low-key and inspirational at the same time--one of the most talented interviewers on television....cl
Reply · Like · 2 seconds ago

Howser, who devoted his life to chronicling people and places in California, died Jan. 6 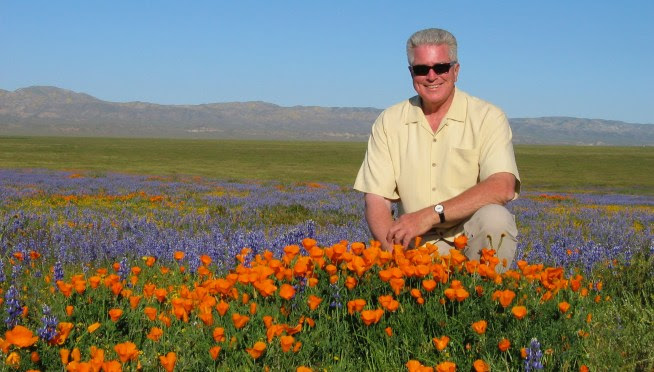 advertisement
A public salute to Huell Howser, the affable host of public broadcasting’s long-running “California’s Gold” series, will be held at 4 p.m. on Tuesday at the Griffith Observatory, hosted by City Councilman Tom La Bonge.
Howser, an intensely private man whose chronicles of California locales earned him a warm spot in the hearts of many in the state, died Jan. 6 after a two-year battle with cancer.
More: TV Personality Huell Howser Dead at 67 | Howser Didn't Want Memorial, Died of Cancer
He had told friends he did not want a memorial or funeral service.
LaBonge’s event will conclude with what the councilman is calling a “sunset salute” to Howser at 5:07 p.m.
A note on LaBonge’s website invited the public to gather at 3:30 p.m. on the steps of the observatory. A shuttle will be provided from the Greek Theater for those who prefer to park there.
"Huell had a tremendous enthusiasm for California landmarks like the Griffith Observatory," LaBonge, said in the online invitation. "And now we must say goodbye to our own California landmark, Huell Howser."
Howser was 67 when he died.

Posted by Chloelouise at 10:17 AM No comments:

In a strongly-worded resolution passed with unanimous support, the Del Mar City Council has urged the banning of a popular gun show on the city's fairgrounds. NBC 7's Catherine Garcia reports.
advertisement
In a strongly worded resolution passed with unanimous support, the Del Mar City Council has urged the banning of a popular gun show at the city's fairgrounds.
For the last 22 years, "Crossroads of the West" has held its show in Del Mar, an ocean-side city of about 4,500 residents located 20 miles north of San Diego. The group promotes 60 shows a year throughout the west coast.
Gun shows like "Crossroads" have recently been criticized for their gun registration policies, especially in the wake of the Newtown massacre.
On Monday, the council cited the tragedy, in addition to the rising number of Americans killed with guns, as reason to ban the show from the fairgrounds.
"Hosting gun shows in Del Mar and calling them 'the Del Mar Gun Show' implies tacit approval of the gun shows by the citizens of Del Mar," according to the resolution.
The resolution urged the District Agricultural Association, which hosts the gun shows, to not renew its contract with Crossroads of the West or any other gun show sponsor.
"My response, relative to the school shootings is that when you have a gun-free zone, it is an invitation to people to come in and do what they want to do," said Dexter Haight, president of the NRA Members Council of Greater San Diego. "That's where people who want to do bad things are going to go to."
Haight said although he was urged to direct gun control questions to NRA headquarters, he felt there was too much misinformation at the meeting to remain quiet.
The council's action is not the first showing of support for such a ban. One local resident collected a petition with more than 750 signatures to ban the gun shows from Del Mar.
Organizers maintain that the show poses no danger to the community, though.
The Del Mar Fairgrounds Board of Directors met to hear what residents and members of the public thought about a potential ban last week.
"As a public entity we have to be cognizant of the fact that we cannot discriminate against who can or cannot use our facility," Board of Directors President Adam Day said earlier this month. "These shows are operated under the most strict rules and regulations."
Some supporters of gun shows say the responsibility lies with the owner of the weapon, while opponents say it is time for local officials to step in.
Day said that unless a board member challenges the gun show, it is unlikely it will be canceled.
Posted by Chloelouise at 9:44 AM No comments: