By Soraya Roberts | North Stars – 1 hour 4 minutes ago
Ron Burgundy stayed classy in Toronto by announcing that he is a "badass."
Will Ferrell was promoting "Anchorman 2: The Legend Continues" on "George Stroumboulopoulos Tonight" this week, and the actor discussed a vital scene at the end of his new film that features a legendary rapper (whom Ferrell didn't identify). In the interview, the actor admitted that he has quite a bit of street cred himself.
"I'm pretty hip-hop. When you look at me you think, 'He's bad-ass,'" Ferrell said in the interview, which airs on CBC on Monday.
The 46-year-old actor said he considered it "high praise" that he has been mentioned in songs like "N---as in Paris" by Kanye West and Jay Z.
"For some reason, lines from the movies we've done and characters have been referenced by the hip-hop community through so many songs," Ferrell said. "I don't know why necessarily, but it's fantastic." 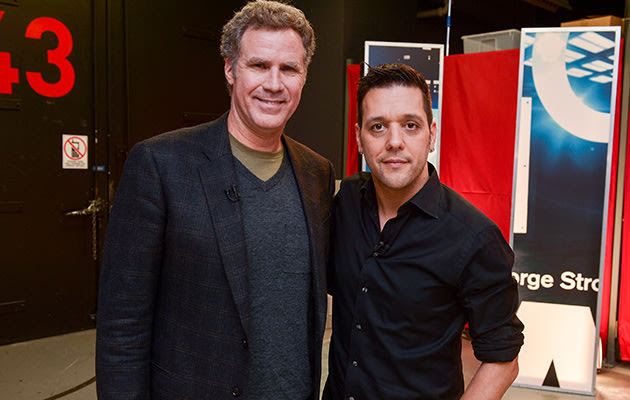 Will Ferrell and George Stroumboulopoulos. (George Pimentel/WireImage)
Ferrell has been promoting his new film, which premieres Dec. 18, across Canada over the past week. On Sunday, he wore a kilt to Winnipeg's curling event Tim Hortons Roar of the Rings while in character as Ron Burgundy. "I tell you, Winnipeg is the Paris of Canada," he said.
A day later, the actor also spoke to the Toronto Star about Rob Ford, for whom Ron Burgundyrecently sang a re-election campaign song, "Working for the Weekend," on Conan O'Brien's show.
"I’m just amazed at Toronto, considering it’s such a sophisticated city, and that’s the mayor," he told the Star. "It’s hilarious."
Ferrell actually met Ford back in July 2012, while he and Zach Galifianakis promoted their film "The Campaign" in Toronto. But something tells us they probably won't be meeting this time around.

copied from Yahoo Canada
Posted by Chloelouise at 10:07 AM