Eric Holder: A Significant Step Forward For the US

Series: On politics... and whatever

Oddly, the first black president can do little to right racial wrongs, but the first African-American attorney general does much
BETA 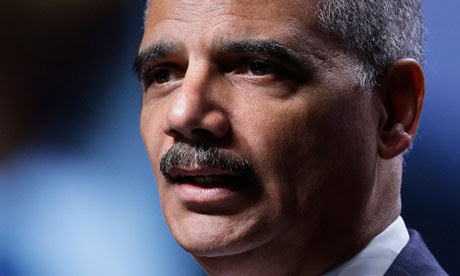 In Texas, there is a history of 'pervasive voting-related discrimination against racial minorities,' AG Eric Holder said recently. Photograph: Matt Rourke/AP
Only Obama's most vicious critics deny him the singular accomplishment that, in a way, he shares with the country as a whole: he's the first black president. Nothing can take that away from him, or from us; it's a point of pride and hope whenever we are reminded of racial inequality's tenacious grip.
But imagine we'd elected another white guy – same policies, even the same personality. In that scenario, the Obama (the white version: O'Bama?) administration's most striking symbol for the advancement of American civil rights would be the appointment of Eric Holder, the nation's first black attorney general.
Civil libertarians may chuckle (or gasp) at the idea of Holder as a rights torch-bearer. He personally approved the administration's collection of the Associated Press' phone records, its surveillance of Fox News reporter James Rosen, and the unprecedented pursuit of Rosen as a "criminal co-conspirator" in violation of the Espionage Act. His department has stonewalled a Freedom of Information Act request to discover the justifications for US government drone strikes on American citizens.
He capitulated to congressional and military demands (with a possible assist from the White House) that terrorism suspects stand trial in military tribunals – but grudgingly and in spite of his personal conviction that there is "no other tool that has demonstrated the ability to both incapacitate terrorists and collect intelligence from them over such a diverse range of circumstances as our traditional justice system". He decided to shield CIA interrogators from prosecution for committing torture and killing prisoners of war. And just recently, Reuters reported that Holder's Justice Department has expanded the already-suspect use of NSA wiretaps to collect information about domestic criminal investigations, a use of secret data collection far beyond any other in American history.
And that's just a list of the things that upset observers on both sides of the political spectrum. Add in controversies that infuriate the right, those having to do with the "gun-running" operation Fast and Furious, hissupport for executive action on reducing gun violence, and his possiblerole in the IRS's treatment of Tea Party groups – and it's clear that the shred of goodwill that Obama holds onto by the simple fact of his ancestry and personal achievement is largely unavailable to Holder.
Yet, it's Holder whose tenure will reach farthest into the everyday lives of black Americans.
Holder's announcement Monday of a radical new approach, at the federal level, to the "war on drugs" is just the most recent improvement on policies that have a direct effect on the black community – though the cost of unjust mandatory minimum sentences is also a real one to all Americans, to the tune of billions of dollars a year.
Holder has also chosen to engage head-on in the fight to keep the gains achieved by the Voting Rights Act. While really just a proactive move to enforce the parts of the law left standing by the US supreme court's June decision, it's also a precedent-setting foray that gives VRA advocates in Congress political cover for their push to restore the guidelines that determine which jurisdictions' discriminatory pasts merit special oversight.
And in the wake of the Zimmerman verdict, it has been Holder who offered the Obama administration's most passionate condemnation of the "stand your ground" laws, which muddied the legal waters and allowed Zimmerman to avoid harsh consequences for the death ofTrayvon Martin.
This last act, while carrying the least weight in terms of policy, bears the best witness to why Holder matters so much to the future of racial equality in the US. He did not simply condemn the de facto discriminatory stand-your-ground policies, he bore autobiographical witness to the quotidian injustices faced by black men today, in America, even now. In a speech to the NAACP, he said:

I was stopped by a police officer while simply running to a catch a movie, at night in Georgetown, in Washington, DC … [Trayvon Martin's death] caused me to sit down to have a conversation with my own 15-year-old son [about] how to … interact with police … like my dad did with me.

In a speech widely-circulated among conservatives as proof that Holder holds a "reverse-racism" grudge against white Americans, Holder spoke frankly about the illusion of equality that impedes the expansion of equality. And this was right at the start of his term, addressing Department of Justice employees. (You can quibble with his venue and timing – he probably intended to set a marker, but he wound up poisoning the well – but he wasn't wrong.)

Though this nation has proudly thought of itself as an ethnic melting pot, in things racial we have always been and I believe continue to be, in too many ways, essentially a nation of cowards. We, as average Americans, simply do not talk enough with each other about race.

This is as true today as it was then. And even more to the point: we simply do not talk enough with each other about Eric Holder's race.
It's possible that Holder's personal investment in his office is what hasundermined his progress in other areas, and exacerbated his administrative weaknesses. He is reportedly admired for his loyalty and attention to his staff and colleagues; we generally like our attorneys general to be on the side of the law, not individuals. (The man who has thus far won history's greatest praise, after all, is the one who was essentially fired after just four months: Elliot Richardson, who resigned rather than obey Nixon's order to fire Watergate investigator Archibald Cox.)
Obama will always be the man who broke the color barrier to the White House, but his specific actions in the arena of black-white relations have been understandably muted – and the strong reactions to the occasions when he has resorted personal commentary explain why: he must, at all costs, avoid the appearance of being an angry black man. Eric Holder isan angry black man, and thank God for that.
We should not ignore the growth of the surveillance state under his watch. Indeed, black citizens have just as much, if not more, cause to be alarmed by unimpeded invasions of privacy and warrantless searches and seizures. This is not a free pass for the setbacks in freedom Holder has allowed; it's just an acknowledgment of the civil rights policies that could, I hope, pave the way for another administration – one created by advancement in voting rights and soothing of race relations – to undo the wrongs overseen by this one.
Eric Holder is the first black attorney general – an asterisk to the term of the first black president. But it's the first black attorney general who's helping to make sure there can be a second black president.