Bill O'Reilly Gets It Wrong: 'Justice for Trayvon' rallies draw thousands across USA

George Zimmerman's acquittal a week ago on all charges in the shooting death of the unarmed black teen touched off protests across the nation. 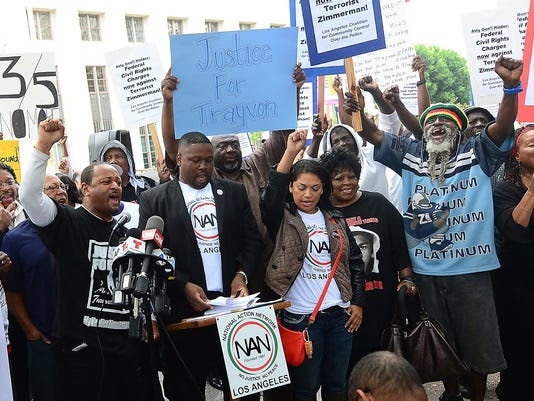 SHARECONNECT 116TWEETCOMMENTEMAILMORE
Thousands gathered Saturday at rallies in more than 100 cities nationwide to remember Trayvon Martin, to press for federal civil rights charges against the man who shot him, and to attack stand-your-ground self-defense laws.
George Zimmerman's acquittal a week ago on all charges in the shooting death of the unarmed black teen touched off protests across the nation. The Justice Department is investigating whether Zimmerman violated Martin's civil rights when he shot the 17-year-old during a February 2012 confrontation in Sanford, Fla.
In New York, the Rev. Al Sharpton took aim at stand-your-ground laws in more than a dozen states that generally give people wide latitude to use deadly force if they fear serious bodily harm. "We are trying to change laws so that this never, ever happens again," Sharpton, who organized the rallies through his National Action Network, told the crowd in New York.
Zimmerman's lawyers had considered the controversial stand-you-ground defense, but opted instead for a more traditional self-defense argument.
Sybrina Fulton, Trayvon's mother, spoke at the New York rally. "Today it was my son. Tomorrow it might be yours," she warned the crowd. Trayvon's father, Tracy Martin echoed those sentiments at a rally in Miami.
The rallies drew the rich and famous, including Beyonce and Jay Z in New York. But mostly the crowds consisted of regular folks who felt justice was not served at Zimmerman's trial.
In Washington, D.C., hundreds of people braved searing heat, many carrying "Justice for Trayvon Martin" signs, almost all chanting "No justice, no peace." Hellen Smith, 45, brought her 14 year old daughter. The Maryland state human resources manager said she had mixed emotions about the verdict. She said jurors may not have had enough evidence to convict, but added that "We have to stand up for any person of any race who has been unjustly murdered."
Terri White, 60, a Baltimore psychotherapist said she was "disappointed in the system" after Zimmerman was acquitted. "I have two African Americans sons and grandsons and I want to see things change for them."
Washington resident Ralph Reynaud, 69, said the verdict shows that many people connect more easily with Zimmerman than with a black teen. "There was no justice," Reynaud said. "The letter if the law was executed, but the spirit of it was invalidated."
Most of the rallies and vigils were taking place outside federal court buildings. Sharpton said the vigils will be followed by a conference next week in Miami to develop a plan to address Florida's "stand your ground" law.
The rallies came a day after President Obama, speaking to reporters at an impromptu gathering in the White House briefing room, said that all Americans should respect the jury's acquittal of Zimmerman, but that white Americans should also understand that African Americans are pained by Trayvon's death and continue to face racial discrimination.
Obama told reporters that, like other African Americans, he has been followed by security guards while shopping, and has seen motorists lock their doors or women hold tighter to their purses as he walked near them. "Those sets of experiences inform how the African-American community interprets what happened one night in Florida."
"I think it's important to recognize that the African-American community is looking at this issue through a set of experiences and a history that doesn't go away," Obama said, and "it's going to be important for all of us to do some soul-searching."
The president also questioned the wisdom of Florida's "stand your ground" law and suggested people consider whether Trayvon also had the right to stand his ground, adding: "Do we actually think that he would have been justified in shooting Mr. Zimmerman, who had followed him in a car, because he felt threatened?"
Obama also paid tribute to Trayvon's parents, saying that "I can only imagine what they're going through and it's remarkable how they've handled it."
In a statement, Trayvon's parents Tracy Martin and Sybrina Fulton said Friday, "We are deeply honored and moved that President Obama took the time to speak publicly and at length about our son, Trayvon. The President's comments give us great strength at this time."
Contributing: David Jackson, Jordan Friedman, Molly Vorwerck and Steph Solis; Associated Press
Follow John Bacon @jmbacon on Twitter

showcasing the statement of Bill O'Reilly this week on his show as he confronted Geraldo Rivera about Al Sharpton claiming his rallies were fizzling out....how Bill O'Reilly got it wrong.....claiming there is no spin on his show and he is always telling the truth, looking out for the average working guy.....really, Bill....because I think this time you got it wrong..........cl
Posted by Chloelouise at 12:12 PM