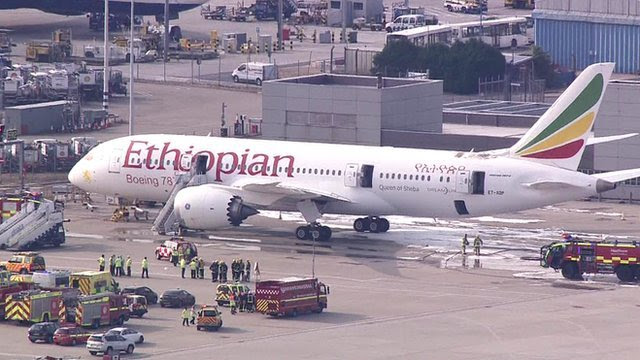 Flights have resumed at London's Heathrow Airport after a fire on a parked Ethiopian Airlines Boeing 787 Dreamliner jet.
All runways were closed for nearly 90 minutes after the fire at 16:30 BST. No passengers were aboard the plane at the time, a Heathrow spokesman said.
Fifty Dreamliners worldwide were grounded in January after malfunctions with the plane's lithium-ion batteries.
Boeing modified the jets with new batteries and flights resumed in April.
The Air Accidents Investigation Branch of the Department for Transport has despatched a team to the scene.
The Ethiopian Airlines Dreamliner in the Heathrow incident - named the Queen of Sheba - flew from Addis Ababa to Nairobi on the first commercial flight since the grounding.
Pictures of the Heathrow fire showed the Queen of Sheba close to a building and surrounded by fire vehicles. London Fire Brigade said its crews assisted Heathrow staff.
Fire-retardant foam was sprayed at the airliner, and an area on top of the fuselage in front of the tail appeared to be scorched.
Ethiopian Airlines said smoke was detected from the aircraft after it had been parked at Heathrow for more than eight hours.
Production difficulties 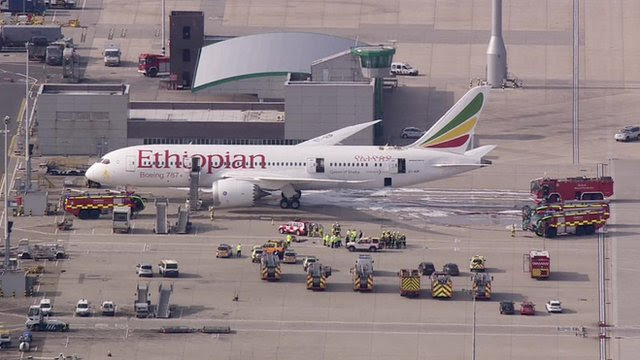 Aerial pictures show the plane surrounded by emergency crews
A Heathrow spokesman said: "Heathrow's runways are now fully open following an earlier fire on board an Ethiopian Airlines aircraft which the airport's emergency services attended.
"The aircraft was parked on a remote parking stand and there were no passengers on board. Arrivals and departures were temporarily suspended while airport fire crews attended to this incident.
"This is a standard procedure if fire crews are occupied with an incident."
Heathrow reopened shortly before 18:00 BST but was advising passengers to check the status of their flights with the airlines.
Gatwick Airport said it experienced minor delays on departing flights as it assisted Heathrow with flights that were diverted.
Meanwhile, Thomson Airways said one of its Dreamliners travelling to Florida returned to Manchester Airport as a precautionary measure, not connected to the Heathrow fire.
Thomson, which became the first British carrier to operate the aircraft earlier this week, and is taking delivery of eight of the planes, said the plane had "experienced a technical issue".
British Airways is taking delivery of the first two of its 24 Dreamliners.
Virgin Atlantic said it "remains committed" to taking on the first of its 16 Dreamliners in September 2014.
The British pilots' union Balpa said: "The Boeing 787 Dreamliner forms an important part of many of our airlines' future plans, and it is vital that the cause of this fire is established as quickly as possible.
"All parties in the industry need a full and transparent explanation as to what has been identified as the root causes in this series of events."
The battery problems followed production difficulties for the Dreamliner, marketed as a quiet, fuel-efficient aircraft carrying between 201 and 290 passengers on medium-range routes.
Continue reading the main story

It was due to enter passenger service in 2008 but it was not until October 2011 that the first commercial flight was operated by Japan's All Nippon Airways.
The groundings of all Dreamliners in service in January followed two major incidents concerning the plane's two lithium-ion batteries.
On 7 January, a battery overheated and started a fire on a Japan Airlines 787 at Boston's Logan International Airport. Nine days later, an All Nippon Airways 787 had to make an emergency landing in Japan after a battery started to give off smoke.
The two batteries are not used when the 787 is in flight.
They are operational when the plane is on the ground and its engines are not turned on, and are used to power the aircraft's brakes and lights.
The new versions of the batteries, which run at a much cooler temperature, are now enclosed in stainless steel boxes.
Boeing shares fell on the New York Stock Exchange on news of the fire.
A Boeing spokesman said: "We're aware of the event. We have Boeing personnel on the ground at Heathrow and are working to fully understand and address this."
Are you in the area? Please get in touch using the form below.
Send your pictures and videos to yourpics@bbc.co.uk or text them to61124 (UK) or +44 7624 800 100 (International). If you have a large file you can upload here.
Read the terms and conditions

More on This Story