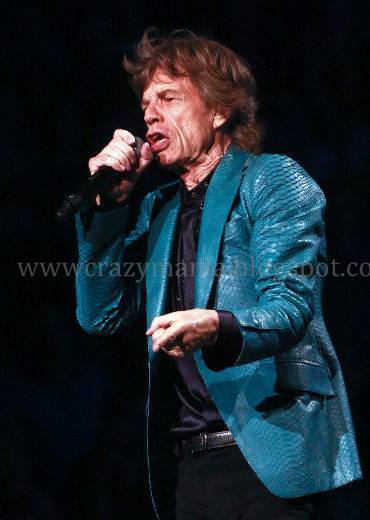 Right, I really want this jacket.......this was copied from crazymamablogspot.com....
here is the link....this website has some very good pictures of the Rolling Stones...
http://wwwcrazymama.blogspot.com/2013/06/rolling-stones-give-toronto-surprise-by.html

Rolling Stones give Toronto a surprise by performing 'Worried About You'...

Rolling Stones give Toronto a surprise by performing 'Worried About You'

AEG Live is the promoter of the Rolling Stones' 2013 tour, which features former Rolling Stones guitarist Mick Taylor as a guest on all the tour dates. The tour has been named "50 and Counting" as a celebration of the Rolling Stones' 50th anniversary.
At the June 6 concert in Toronto, the Rolling Stones skipped performing "Happy," which has guitarist Richards on lead vocals. "Happy" has been a mainstay at most Rolling Stones concerts since the song came out in 1972. The Stones skipped playing the song at their Chicago concert on May 28, 2013, their Los Angeles concert on May 20, 2013 and their Chicago concert on June 3, 2013. Richards has been singing "You Got the Silver" at concerts where "Happy" is not part of the set list. In addition to "Happy," the other song that Richards has been consistently singing lead vocals on for the 2013 tour is "Before They Make Me Run."
As of May 8, 2013, select concerts on the tour will feature a song performed by request from fans who voted online via the official Rolling Stones mobile app. For each concert, fans will be given a choice of five different songs to vote for, and the Rolling Stones will perform the song that gets the most votes for that concert. The Rolling Stones also did this for their "50 and Counting" concerts in 2012. At the concert on June 6, 2103, the song performed by request was "Worried About You."
Posted by Chloelouise at 9:28 AM