Is This Pit Bull Terrier An Angel Or What 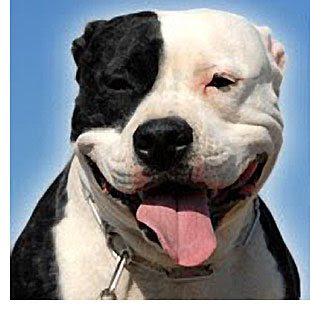 PORT CHARLOTTE, Fla. — The wandering 65-pound Pit Bull mix might have seemed menacing to some passerby, but one woman will always remember him as her “guardian angel.”
The dog, which authorities think is lost and not a stray, successfully thwarted a robbery attack on a mother and her 2-year-old son, who were held at knifepoint Monday afternoon.
The Florida woman, who has been identified by authorities simply as “Angela,” was leaving a playground with her toddler son in Port Charlotte when a man approached her in the parking lot with a knife and told her not to make any noise or sudden movements.
Angela didn’t have to do either to protect herself and her child — a dog mysteriously ran to the scene and charged the man, who quickly fled.
“I don’t think the dog physically attacked the man, but he went at him and was showing signs of aggression, just baring his teeth and growling and barking. It was clear he was trying to defend this woman,” Animal Control Lt. Brian Jones told Pet Pulse.
“I don’t know what this man’s intentions were, but it is very possible this dog saved her life.”
The exceptional part of the story, Jones said, is that the dog had never met or even seen the people it quickly jumped to defend.
“You hear about family dogs protecting their owners, but this dog had nothing to do with this woman or her kid,” Jones said. “He was like her guardian angel.”
After the alleged thief ran away, Angela quickly placed her son, Jordan, in the car and tried to drive off. Before she could, though, the dog jumped into her backseat, waiting with her for the police and animal control officers to arrive at the scene.
The dog was transported to a local shelter and if his owners don’t step forward within five days, Jones said, Angela and her family plan to adopt the savior she named “Angel.”
Animal control officers and shelter workers believe Angel is lost, and not a stray, because of his good health, sturdy weight and mild temperament.
“It’s funny, that someone’s irresponsibility could have saved someone’s life,” Jones said of Angel’s possible owners.
For Angela, it doesn’t matter where the dog came from, just that he was there when she needed him most.
“I don’t know what his [the thief's] intentions were — I don’t know why he did it, but I’m glad that — we call him Angel — I’m glad that Angel showed up because I don’t know what would have happened,” Angela told NBC2 News.
Posted by Chloelouise at 9:46 AM