Bill O'Reilly, Sean Hannity and Islamophobia in The United States

their crime.....always pretending to have a discussion when there is obviously no intention of trying to find actual facts or information.

What a stupid game by these particularly ugly Americans.

If  fox news, or these American embarrassments were truly interested in finding facts and information they would certainly conduct themselves differently..........

Recently, mr. o'reilly had a representative on from CAIR but instead of letting the man talk he proceeded to interrogate the individual.    He must have felt embarrassed, if that is possible, but he continued to proclaim his innocense and the reasons for his vulgarity on the following shows.

There is a reason why Wesley Clark would not go on o'reilly...I wonder why..... 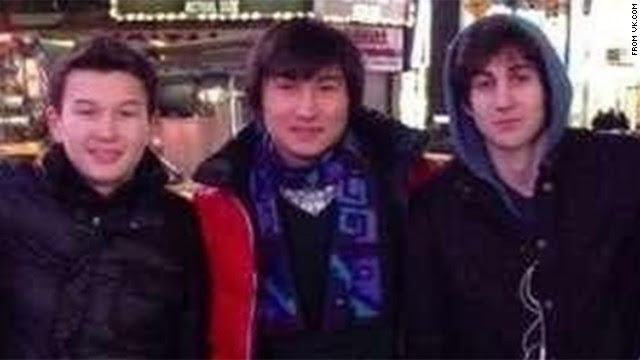 From left, Azamat Tazhayakov and Dias Kadyrbayev went with Boston bombing suspect Dzhokhar Tsarnaev to Times Square in this photo taken from the social media site VK.com. Tazhayakov and Kadyrbayev were arrested on Wednesday, May 1, on charges they tried to throw investigators off Tsarnaev's trail. See all photography related to the Boston bombings.
HIDE CAPTION
Suspects tied to Boston bombings
<<
<
1
2
3
4
5
6
7
8
9
10
11
12
13
14
15
16
17
18
19
20
21
22
23
>
>>


STORY HIGHLIGHTS
Editor's note: Arun Kundnani is author of the forthcoming book "The Muslims are Coming! Islamophobia, extremism, and the domestic War on Terror," to be published by Verso Press in January 2014. He teaches terrorism studies at John Jay College, New York.
(CNN) -- Since the bombing of the Boston marathon -- in which three people, including a child, were killed and more than 200 injured -- attention has naturally focused on what could have been done to prevent it.

Some, such as Rep. Peter King, the New York Republican who chairs the Homeland Security Committee, have argued for increased surveillance of Muslims in the United States. Local police departments "have to realize that the threat is coming from the Muslim community and increase surveillance there," he says.
Others have asked whether leads were properly followed and if better sharing of information between agencies would have helped thwart the bombing.

Boston Imam: Suspect should be buried

The roots of radicalization
Yet, as the Stasi itself eventually discovered, no system of surveillance can ever produce total knowledge of a population. Indeed, the greater the amount of information collected, the harder it is to interpret its meaning. In the majority of terrorist attacks in recent years, the relevant information was somewhere in the government's systems, but its significance was lost amid a morass of useless data.
What is obscured by the demands for ever greater surveillance and information processing is that security is best established through relationships of trust and inclusion within the community. The real missed opportunity to intervene before the bombs went off in Boston likely came three months earlier, when bombing suspect Tamerlan Tsarnaev stood up during a Friday prayer service at his mosque - the Islamic Society of Boston, in Cambridge - to angrily protest the imam's sermon.
The imam had been celebrating the life of the Rev. Martin Luther King Jr., which Tsarnaev thought was selling out. According to one report, Tsarnaev was then kicked out of the prayer service for his outburst.
Since 9/11, mosque leaders have been under pressure to eject anyone expressing radical views, rather than engaging with them and seeking to challenge their religious interpretation, address their political frustrations, or meet their emotional needs.
That policy has been forced on mosques by the wider climate of excessive surveillance, which means mosques are wary of even having conversations with those perceived to be radicals, for fear of attracting official attention.
The fear is that every mosque has a government informant listening for radical talk. Unsurprisingly, this means most people are reluctant to engage with young people expressing radical views, who instead tend to be ejected from the congregation.
The Tsarnaev brothers were said to be angry about U.S. foreign policy in Afghanistan and Iraq, possibly drawing parallels with their own experiences as refugees from Russia's brutal wars of counterinsurgency in the Caucasus. But because discussions of foreign policy have been off-limits in mosques since 9/11, they were unlikely to have had their anger acknowledged, engaged, challenged or channeled into nonviolent political activism.
The heavy surveillance of Muslims has meant there is no room for mosques to engage with someone like Tamerlan Tsarnaev, listen to him, challenge those of his ideas that might be violent, or offer him emotional support. Instead, Muslims have felt pressured to demonstrate their loyalty to America by steering clear of dissident conversations on foreign policy.
Flawed models of the so-called "radicalization" process have assumed that the best way to stop terrorist violence is to prevent radical ideas from circulating. Yet the history of terrorism suggests the opposite is true.
Time and again, support for terrorism appears to increase when legitimate political activism is suppressed - from the French anarchists who began bombing campaigns after the defeat of the Paris Commune, to the Algerian National Liberation Front struggling to end French colonialism, to the Weather Underground's "Declaration of a state of war" after state repression of student campaigns against the Vietnam War.
Reconstructing the motivation for the bombings is fraught with difficulty; there can be little certainty in such matters. But pathological outcomes are more likely when space for the free exchange of feelings and opinions is squeezed.
As many community activists and religious leaders argued in Britain in the aftermath of the 7/7 terrorist attacks on the London transport system in 2005, the best preventive measure is to enable anger, frustration and dissent to be expressed as openly as possible, rather than driving them underground where they more easily mutate into violent forms.
These activists put this approach into practice, for example at the Brixton mosque in south London, by developing initiatives in the community to engage young people in discussions of foreign policy, identity and the meaning of religious terms like jihad, in order to counter those who advocate violence against fellow citizens. It is difficult to measure the success of such programs. But many see them as having played an important role in undermining support for terrorism. In what must seem a paradox to backers of East German levels of surveillance like Peter King, more radical talk might be the best way of reducing terrorist violence.
No one could have predicted from Tsarnaev's outburst that, a few months later, he would be suspected of carrying out an act of mass murder on the streets of Boston. And we don't know what would have made a difference in the end. But a community able to express itself openly without fear, whether in the mosque or elsewhere, should be a key element in the United States' efforts to prevent domestic terrorism.
Follow @CNNOpinion on Twitter.
Join us at Facebook/CNNOpinion.
The opinions expressed in this commentary are solely those of Arun Kundnani.
Posted by Chloelouise at 10:07 AM