He confirmed that the Stones tour, including Hyde Park, this July, will include Mick Taylor and he will be playing even more songs than he did in December.  He would love to resume his rdio show again as soon as he has time and he has extablished a twitter account, from the suggestion of his wife, to let everyone know about his art work, upcomming events showcasing his talents in painting, touring with the Stones and his activities with other groups, as well.
It was so fun to hear Ronnie Wood on the radio again today.  I listen to him on the Absolute Classic Rock Station from the UK.
Previously, he had been on every Sat at 2 PM Pacific but recently he said he has just been so busy with his new marriage and getting ready for the Stones tour this summer and in recent past months there just has been no time.
He said he loves doing the radio show, it is fun and interesting but right now he has to many other things to concentrate on and he will be glad to resume his radio show once again after things calm down.

He is enjoying his new marriage and he has recently returned from spending time in Barcelona.
Personally, I do not blame anyone for leaving London, after just returning from a very fun, but chilly vacation there.  London is my favorite city to visit.  I love just being there--I have fun just looking at everything but this time it was so cold I could not even enjoy photographing my favorite fountains.  That would be The Italian Gardens in Hyde Park.
Ronnie also talked about the Rolling Stones playing in Hyde Park this July.  The best news ever--he confirmed that Mick Taylor will be joining the Stones again and playing on even more songs now and of course the DJ mentioned Midnight Rambler.
Everyone I know who follows the Rolling Stones says Mick Taylor is the best and they cannot wait to see him again.  They say that Mick Taylor is a lovely person and that when he was in the group they were at their musical highpoint.
Of course Ronnie Wood was very gracious as always when he talked about Mick Taylor and other members of the group, as well.
Ronnie, I will miss your radio shows every Saturday but I can't wait to see your on tour.
There are many ways to listen to Absolute Classic Rock--I google it, go to the website and then listen live--that works for me but their are several other ways to listen, too.
I will be going back to their website for interviews with Mick Jagger and David Bowie.
It's fun to listen to a radio station from another country.  I feel so international.
David Bowie is extremely popular and very loved in London.  He currently has an exhibition at the Victoria and Albert Museum.  The people were literally lined up out the door to see the show.  It includes renting a headset and following the recording, listening to music and learning about his famous costumes.  The price was 14 pounds and I still had to make an appointment to see it later in the day so I am sorry to say I missed it as we already had tickets to a show.


here is a link to The Victoria and Albert Museum


the museum is really worth seeing--the cafe is excellent and it is very easily accessible on the tube--and best of all it is free.....


here is a picture of Ronnie...we always listen to Ronnie every Sat...Ronnie listening to Ronnie.....he is wearing his sunglasses to look more like a rock star....really, he's just as cute as a button, just like Mick in his younger days....... 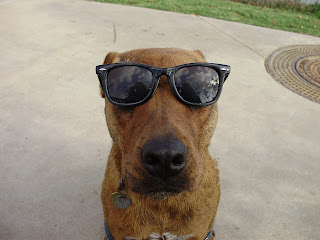 here is David Bowie at the V and A: 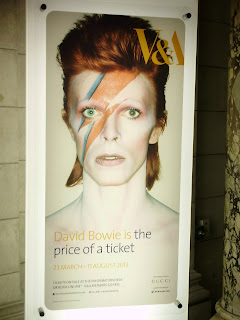 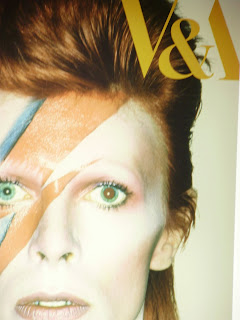