I'm Muslim, and I hate terrorism

I'm Muslim, and I hate terrorism 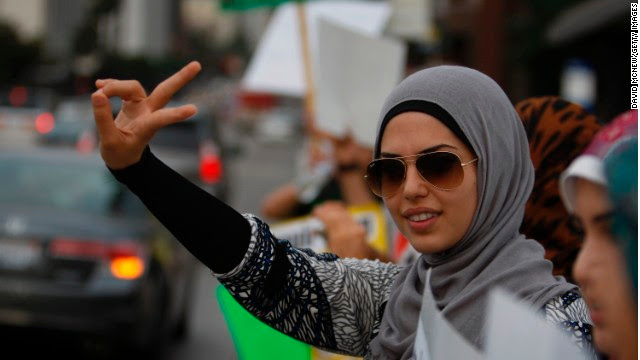 A woman makes a peace sign gesture at a protest in Los Angeles, California, against religious hatred.
STORY HIGHLIGHTS
Editor's note: Dean Obeidallah, a former attorney, is a political comedian and frequent commentator on various TV networks including CNN. He is the co-director of the upcoming documentary "The Muslims Are Coming!" and co-host of a new CNN podcast "The Big Three" that looks at the top three stories of the week. Follow him on Twitter @deanofcomedy.
(CNN) -- I'm an American-Muslim and I despise Islamic terrorists. In fact, despise is not even a strong enough word to convey my true feelings about those who kill innocent people in the name of Islam. I hate them with every fiber of my being.

I'm not going to tell you, "Islam is a religion of peace." Nor will I tell you that Islam is a religion of violence. What I will say is that Islam is a religion that, like Christianity and Judaism, is intended to bring you closer to God. And sadly we have seen people use the name of each of these Abrahamic faiths to wage and justify violence.
The unique problem for Muslims is that our faith is being increasingly defined by the actions of a tiny group of morally bankrupt terrorists. Just to be clear: The people who commit violence in the name of Islam are not Muslims, they are murderers. Their true religion is hatred and inhumanity.
The only people terrorists speak for are themselves and the others involved in their despicable plot. They do not represent me, my family or any other Muslim I know. And believe me, I know a lot of Muslims.

Group accused of posting anti-Muslim ads
We hate these terrorists more than non-Muslims. How can I say that? Because they harm innocent people in the name of our religion and consequently we suffer a backlash because of their acts. It can be anything from a spike in hate crimes to people viewing Muslims as less than fully American because of our faith. We are the ones called to answer for the sins of people we detest.
Since the Boston bombing has renewed for some concerns about Muslims, I wanted to candidly answer three questions I have been asked repeatedly over the years:
1. Why do some Muslims commit terrorism?
I'm not a terrorism expert but I will share the view of those I have spoken to in the Muslim community. There can be no doubt that some Muslims wrongly believe that their terrorist act is sanctioned by Islam. But to us their true motivation is not religious, but rather political.
Islam is simply used by terrorists as a way to recruit support.They then engage in terrorism to bring attention to their grievances or to achieve their political agenda, just as other terror groups have done in the past.
The recent statement of the Islamic militant group in the Caucasus region denying involvement in the Boston bombing makes this very point. They expressly tell us that they have a specific political agenda: "The Caucasian Mujahideen are not fighting against the United States of America. We are at war with Russia, which is not only responsible for the occupation of the Caucasus, but also for heinous crimes against Muslims."
2. Why don't Muslims denounce terrorism?
Just to be clear: American Muslims and U.S. Muslim organizations have unequivocally denounced terror attacks. Not just once, but over and over.
But that doesn't matter if you haven't heard it. And despite our best efforts to get this message out there, what attracts more media attention: A Muslim denouncing terrorism or footage of an explosion?
Does that mean that we will stop denouncing terrorism? Of course not. But we will have to be more creative in our efforts to attract media coverage to make this point to our fellow Americans.
3. Why don't Muslims stop blowing stuff up?
I have never blown up anything, except maybe a model toy tank when I was a kid. Nor has any other Muslims I've met in person or even on Facebook. But still we are charged by many with the task of policing a religion of more than a billion people.
Although this may not change some people's perception, statistically Muslims have not been the ones involved in most terror plots in the United States. In fact, since 1995, 88% of the domestic terrorist plots have been by right-wing groups, ecoterrorists and anarchists, according to an analysis by the Center for American Progress. But still, 12% were Muslims.
Believe me, we wish that number were zero. But here's the brutal truth: Neither law enforcement nor the American Muslim community can stop every radical or criminal who happens to be Muslim. A "lone wolf" can devise his or her evil plan in secret, making detection almost impossible.
But we are trying. As L.A. County Sheriff Lee Baca testified before Congress in 2011, seven of the past 10 al Qaeda plots in the United States were foiled by tips from the American Muslim community.
And just this past Sunday, NYPD Commissioner Ray Kelly told CNN's Fareed Zakaria that his department has a strong working relationship with the New York City Muslim community.
And it's not only American-Muslims working with law enforcement to stop radicals, but Canadians as well. Just this week we saw an Islamic terror plot prevented because of tips from the Canadian-Muslim community to law enforcement
It is my hope that in time, Muslims will not be defined to my fellow Americans by the handful of terrorists, but by the millions of others who are involved in all aspects of American life. Well-known American Muslims range from former NBA star Shaquille O'Neal, TV personality Dr. Oz, U.S. Rep. Keith Ellison to police officers, teachers, judges, deli workers, cab drivers and the millions of American Muslims in between.
These people, not the terrorists, are the true Muslims.
Follow us on Twitter @CNNOpinion.
Join us on Facebook/CNNOpinion.
The opinions expressed in this commentary are solely those of Dean Obeidallah.
Posted by Chloelouise at 8:29 AM