Should David Atlee Phillips Have Been of the Cover of Life Magazine Instead of Lee Harvey Oswald?

Chloe Louise
Talking about the JFK Assassination Clearing House......
I think "The Clearing House" concept is an excellent idea. There is just so much information out there now. I am beginning to think that was the idea--confusion.
The big researchers seem to have the basic facts down now especially in the run-up to the big event.
Will we ever know who pulled the trigger?
The whole Oswald thing continues to be a mystery and I am beginning to think fairy tale.
The history portion of c-span ran a show of top JFK assassination researchers--Professor Wrone said Oswald was a fairy tale. The point I am trying to make is this. The word "fairy tale," that sticks in your mind. It has to be something short and something easy for people to remember or the whole thing becomes a mess of minutia and confusion--the result is that people, the general public, think it will never be solved and then the Bugliosi type people take over.
It's a mess. The citizens have a right to know what happened--reasonable questions have been asked.
Timeline, movie, a good story teller, a Southern accent--a Bill Clinton type that can take a complicated subject and explain it to the lay person--so they can remember the important facts and go away with main idea. I listen to soooo many researchers--real good ones--as soon as they start arguing over Cuban details--not that it is not important--the story is lost.
The story is lost--it is driven into the ground with minutia and the listeners eyes gloss over and their mind wanders and everything is lost. Then the next sentence is that there is no real proof. Lay it out, foot note it and move the story forward in an interesting fashion with key points to remember.
The basic facts are there now particularly with the whole Russ Baker and the George Bush elder thing and apparently Oswald's handler George de Mohrenschildt. Can these things really be denied now?
Really, I beginning to think the person who should have been on the cover of Life magazine was David Atlee Phillips, not LHO.
All of this is just a suggestion--you idea is great. Problem--it is a difficult story to understand--and complicated. Personally--I am still trying to figure out what the CIA is and does.
.................................................................
my turquoise necklace....
,,,sterling silver findings and clasp...this clasp is so easy to use
......swarovski crystal accents
.........17 inches in length..approx.

buy with paypal at www.chloetoo.com: 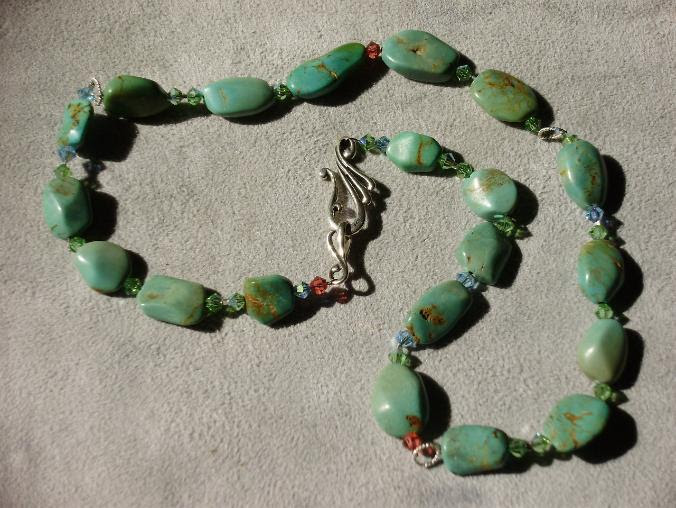 Posted by Chloelouise at 9:55 AM