copied from SALON.......recommended from KNAPP'S NEWS listed on the COAST TO COAST website......cl

Believe it or not: Bill O'Reilly once showed guts reporting on JFK. His new insta-history shows a bulldog gone weak 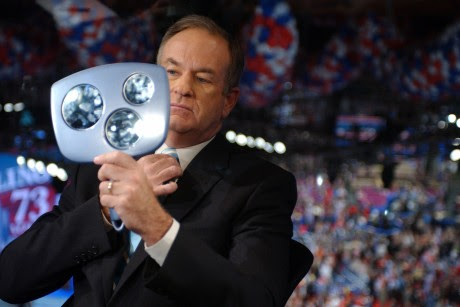 Commentator Bill O'Reilly checks himself out before an interview at the Republican National Convention. (Credit: Reuters/Lisa Miller)
Once upon a time, Bill O’Reilly had balls when it came to investigating the Kennedy assassination. Back in 1991 — as a reporter for the tabloid TV news show, “Inside Edition” – O’Reilly had the guts to track the epic crime all the way into the dark labyrinth of the CIA. Following up on the important work done by investigators for the House Select Committee on Assassinations in the late ‘70s, O’Reilly boldly told his “Inside Edition” audience that there were “crucial” links between alleged assassin Lee Harvey Oswald and the CIA. O’Reilly also reported that the CIA had infiltrated the office of New Orleans District Attorney Jim Garrison, who brought the only criminal case in the JFK assassination to trial, in an effort to sabotage Garrison’s investigation.
That was then – when O’Reilly was a scrappy reporter for low-budget syndicated TV. But now, of course, he’s BILL O’REILLY – Fox News icon, a lavishly paid centerpiece of the Murdoch empire. Everything he says   – every windy pontification and dyspeptic remark – is writ LARGE. He can no longer afford to have the courage of his suspicions. In O’Reilly’s new ideological mold, the CIA is not the incubator of an unspeakable crime against American democracy – it’s the defender of the greatest nation in the world.
And so we have the Fox News star’s latest instant bestseller, “Killing Kennedy: The End of Camelot,” co-written by Martin Dugard, who collaborated with O’Reilly on his earlier runaway success, “Killing Lincoln.” There is almost nothing in this Kennedy for Beginners book that indicates O’Reilly once did some original research on this murky and still deeply haunting subject. Most of this surprisingly dumbed-down book is a biographical rehash of the Kennedy story that will contain nothing new for even casual readers of People magazine and viewers of Kennedy soap opera biopics over the years. Once again, we get the story of JFK’s PT-109 heroics in the South Pacific; the lurid tales of Jack’s womanizing and Jackie’s anguish; the requisite cameos of Sinatra, Marilyn and the Mob; the familiar snapshots of a deeply disgruntled Lyndon Johnson, continually humiliated by the Kennedy brothers and their elite Harvard crowd. None of this is worth the book’s $28 price of admission.

Salon founder David Talbot is the author of the New York Times bestseller, “Brothers: The Hidden History of the Kennedy Years,” and most recently, “Season of the Witch: Enchantment, Terror and Deliverance in the City of Love.”
Posted by Chloelouise at 6:28 PM No comments:

WireImage
The Rolling Stones strode on stage to celebrate 50 years as a band last night and got 20,000 fans rocking.
The sprightly legends – who average 68 year of age – kicked off with I Wanna Be Your Man in a blistering set including Paint It Black, Wild Horses and Gimme Shelter with R&B’s Mary J Blige.
Strutting Mick Jagger, wearing black skinny trousers and a fedora at London’s O2 Arena, said: “What a year it’s been for British celebration. The Queen’s Diamond Jubilee. We didn’t do that.
“The Olympics. We didn’t do that either. James Bond – we didn’t do the song for that. But we’re glad we here tonight.”
Mick also joked about controversy over ticket prices, which ranged from £95 to £950. “Everyone all right in the cheap seats?” he asked. “But they are not really cheap are they, that’s the trouble.”

The Rolling Stones: First night at the 02 Arena
View gallery
The foursome of Mick on vocals, Keith Richards and Ronnie Wood on guitar and Charlie Watts on drums were joined by ex members Bill Wyman and Mick Taylor.
The legends are due to play another show at the venue on Thursday and three more in the US. But a source said: “Given the demand is sky-high and last night’s fireworks, extra dates are looking more likely by the minute.”
And Keith said recently: “My experience is that once the juggernaut starts rolling, it ain’t gonna stop.”
The band, who have this year produced photo book The Rolling Stones 50 in collaboration with the Mirror and written two new singles, are reportedly getting £15.7million for the five shows.
It’s been five years since their last tour. Last week Ronnie revealed they were still trying to decide which songs to play.
He said: “We’ve been thinking long and hard about the setlist but still haven’t finalised it. You forget how hard it is.”
There are still tickets on sale to see The Rolling Stones on Thursday night here.
- To order your copy of The Rolling Stones 50 book, call the Mirror Bookshop on 0871 8036772.


copied from THE MIRROR
Posted by Chloelouise at 11:09 AM No comments:

Artists in this Article

Rolling Stones Q&A: 'This Juggernaut Is Almost Unstoppable'
Mick Jagger and Keith Richards of the Rolling Stones talk to Billboard abour their upcoming live shows and their plans for 2013.
Rolling Stones Flee After Fans Invade Stage in 1965 'Charlie' Clip
In 1965, Rolling Stones manager Andrew Loog Oldham commissioned director Peter Whitehead to shoot cinema verite footage of the group's two-day September Irish tour in an effort, as he put it, to let the lads get their "celluloid legs" and see who most captivated the camera offstage. The footage was collected into a slapdash film called "Charlie Is My Darling" (because the Stones' taciturn drummer was deemed most camera-friendly) that was shopped the following year but never officially released or aired -- although wobbly bootlegs have been circulating for decades -- and the reels sat in film cans, largely untouched, for more than 40 years.
Rolling Stones Start Up Reunion With London Blowout
"It took us 50 years to get from Dartford to Greenwich," said Mick Jagger to 20,000 close friends on Sunday night, at what you might call the lip of the 02 Arena stage. The Rolling Stones were in the process of laughing in the face of logic with an extraordinary, 150-minute celebration of their 50 peerless years.
Rolling Stones Give Brooklyn What It Wants
When even Mick Jagger shows some Brooklyn pride, it's hard not to get into the spirit of things. And the Rolling Stones were nothing if not spirited on the first of four New York-area performances this month.
Rolling Stones Add Bruce Springsteen, Lady Gaga, Black Keys to Final '50' Show
The Rolling Stones have invited Bruce Springsteen, Lady Gaga and the Black Keys to their final "50 and Counting" concert, celebrating an astounding half-century as a band, being held Saturday at the Prudential Center in Newark, NJ. The concert will be telecast live pay-per-view in a Ken Ehrlich-produced special called "One More Shot."

As the Rolling Stones prepare to wrap their 50 And Counting "tour" with Saturday night's pay-per-view show in Newark, N.J., former guitarist Mick Taylor -- a guest at four of the five concerts -- predicts we'll be seeing more of the group in the probably near future.

"I think the Stones have always done things their own way, and they will always continue to do things their own way," Taylor, who was with the Stones from 1969-74, tells Billboard. "I think everybody is having a good time on stage. It's more than just nostalgia. I think they just feel re-energized and possibly very enthusiastic about doing things in the future. I just have an intuitive feeling that if they want to do some more shows, they can. There's no reason why they shouldn't be able to."

Taylor -- who recorded some new guitar parts for the 2010 expanded re-release of "Exile on Main Street" -- acknowledges that he "had my doubts" about how the Stones would hold up on stage these days, and how he'd fit in with them. But he says that any concerns were dispelled after rehearsing for the two shows at London's O2 Arena in November. "It's been really amazing, thrilling and exciting," he notes. "It's been great to play with the band again. I still get the same feeling that I used to get when we played on stage before. I'm a lot more outgoing and not quite as shy as I used to be, so in that respect it's different. I feel re-energized by the experience, too."

Taylor joined the group for "Midnight Rambler" on the shows he's played so far, recalling that "it was always one of the highlights of the shows during my tenure with the Stones in the 70s." And he's enjoying its current incarnation with three guitarists (himself, Keith Richards and Ron Wood). "We didn't even think about it; in a strange way all three guitars kind of blend seamlessly into each other, especially if the sound is really good on stage," Taylor says. "It's one of the longest songs we play at the moment, and it gives Mick (Jagger) the opportunity to play some blues harmonica, which he's very good at."

Taylor says the Stones began working on "Can You Hear Me Knocking" before Thursday's show in New Jersey, but he wasn't sure if it would be performed at Saturday's show. The "One More Shot" pay-per-view concert begins at 9 p.m., with Bruce Springsteen, Lady Gaga and the Black Keys also scheduled to make guest appearances.

On his own, Taylor has been working on "a stack of songs I'd like to record," which he plans to get back to after wrapping up with the Stones. But while he's not sure what his old band will be doing next year, he's "absolutely" will to play more shows if the call comes. "I'm up for 150 percent, yes," he says. "We weren't thinking about 50 years back when I was (in the band). We were living in the moment...and I'm really enjoying the moment right now."
Posted by Chloelouise at 10:41 AM No comments: