Right, I was sitting there, enjoying the sun, ready to read a page in my book but I had to look up as the police sirens kept getting closer and closer--dangerously loud and close.  It's time to get up and move!  Sitting at the south end, the next thing I knew here comes a white SUV turning towards the north end of the Grape Street Dog Park parking lot with 7 police black and whites in hot pursuit.  Really, there is no where to go, literally, except down the canyon---the road ends---its the Balboa Park Trails.

On one side I saw my friend walking towards me with his dog--I saw the SUV and the police heading towards me across the grass--it was surreal.  We got out of the way just in time--I curtailed my dog quickly by his collar as the white SUV plowed right through the fence and barely missed parked cars at he other end of the parking lot.  All of the police followed in a line, right through the park, sirens blaring, lights flashing.  One police car veered off towards the other end of the parking lot--also through parked cars--but the white SUV got  away.

Too bad the police did not block off the parking lot--the Grape Street is a dead end--Grape dead ends into 28th--about a 2 block length with perpendicular parking, then its the fence, the park, the golf course and the canyons.  But really, if the street had been blocked by cop cars would that have been even worse?  The out of control vehicle seemed to be driven by a desperate individual.

It was before rush hour...


That would be around three o'clock at the dog park when the after work crowd starts to come in.  As it was, I'm saying about 2:30--there park was sparsely populated--the dog walkers getting in their last digs before the evening gang and dogs come in.  I did feel so sad for one lady, one real good dog walker and regular--she was visibly shaken--her face showed an exhausted, traumatized, scared expression--so different from her usual calm and controlled composure.

Gosh--when it was over everyone was pushed back up against the golf course fence just trying to regain their composure and figure out what happened.

It was too much excitement--sometimes that place is packed and there are families with little kids and babies and dogs and older people.  I hope people were not hurt anywhere.  Thank goodness for the SDPD

What a scary scene! 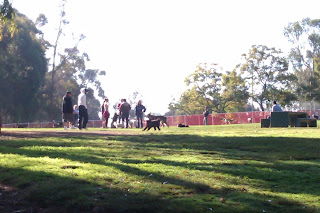 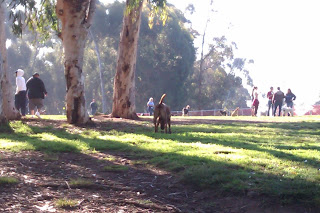 chloelouise--I should have tried to take a picture or a movie with my phone but I literally did not have time--the people were terrorized--I felt sorry for them.
Posted by Chloelouise at 4:00 PM No comments:

Blogger Blames Holly Petraeus' Hair for Sex Scandal: The Worst Take on Anything Ever 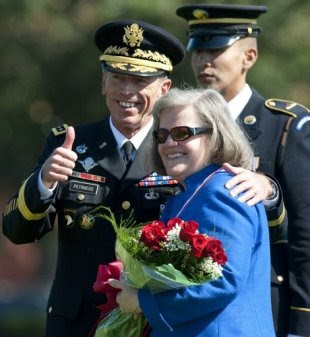 (Getty Images)There are so many questions that need to be answered in this whole Petraeus scandal. There's the hard news question: "Why didn't we know about this sooner? And the tabloid question: "Were the Whistleblower and the Biographer both in love with Petraeus?" And the human interest question: "Why do women love in men in power?" And the rhetorical question: "Wait, that guy is a womanizer?"

And then there's the question that nobody, save for one blogger, would ever think to ask: "Did General Petraeus stray because of his wife's hair?"

A writer called "Blonde Bombshell," who is smartly remaining anonymous, posted a "thinkpiece" about the scandal today. It required multiple readings to verify it wasn't satire, and still I'm still not 100 percent.

You have to go deep into the internet mines to find Blonde Bombshell's words of wisdom. I had entered in a search engine "Petraeus" and "Hair"--two terms I will never put together again--when I found on this story on page three of the search results. Blonde Bombshell's op-ed appears on a blog belonging to a guy named William Briggs, a self-titled "Statistician to the Stars." The blog's' readership, based on the comments, is decent and includes at least once person who's really paranoid about the KBG. The site itself appears to mix opinion, with news stories, and the occasional guest blogger. That's where Blonde Bombshell comes in, an anonymous "guest-blogger" (sure) with hot-tempered opinions on hair, and its marriage-ruining properties.
She begins:
"My heartfelt condolences extend to Mrs. Patraeus, who seems to be, judging from the pictures obtained by the press, a cheery, good-natured woman."
Snap. That's like calling a woman "handsome." You see where she's going here and it isn't nice.

"The paramour of General Petraeus wears a low chignon which indicates that her hair has some length. The wife has a chin-length cut that is ubiquitous among professional women. When she was younger, she had beautiful long straight locks typical of the time."

While BB admits that it's "crass and unfair" to suggest that General Petraeus was driven to long-haired mistresses because of his wife's bob, that is exactly what she's suggesting. In case you don't get that, she posts a picture of Paula Broadwell with the caption "Paula Broadwell with long hair."

Listen up people, she's only going to break it down once:

"A young woman may cut and grow her hair experimentally, but she is often 'growing it out for the wedding' so she has more 'styling options' for the big day. After the wedding, and sometimes before the honeymoon, many women submit to the barber shears. After baby is born, many more go in for 'mom hair' (yes, it's a term, like 'mom jeans') that is wash-and-go. If a woman wears her hair incorrectly out of cycle, she will start hear people asking about when is she going to donate it to one of the organizations that collect hair to make wigs for cancer patients."
What is happening.
"A few weeks ago I saw a woman on the street dressed in business clothes with thinning hair, but she kept it long. She was able to devise a flattering hairstyle that didn't make her look like a plucked mole...My advice to women is to go ahead and grow your hair if you'd like. Maintaining long hair is not difficult or expensive."
So to backpedal, with regards to that question in the headline, I think B.B. is saying, "Yes, Petraeus cheated on his wife because of her hair." On the bottom of Blonde Bombshell's guest post is an editor's note that reads: "The well-married Bombshell has lovely long hair." Someone seems hell-bent on sticking it to Holly Petraeus, which is unnecessary, unkind, and most of all, really, really weird.


speaking of the power of the hairdo:  does this philosophy also apply to donald trump and the Republican party ?

THE ONE HOT REPUBLICAN

THE ONE HOT REPUBLICAN

The one hot and more importantly, not  insane, republican, Jon Huntsman.

Really, I think if they would have run him they would have had a chance.  That seemed to me straight forward from the beginning, but apparently the others did not agree since he did not even come close to winning the nomination.

He said on the Sunday show, yes  I have 7 children and I have been married for a long time, but people can see that and you don.t have to rub it in every one's face.

Right, it seems as if he has respect for people that are a little bit different than himself.  His  family is magnificent but there are so many other  kinds of magnificent families,as well.


Isn't the great thing about America the wonderful mix of individuals and  the way things started in the first place.   I thought that was the premise of the whole place....freedom.  Freedom for everyone,not just sean hannity.

Sean Hannity likes to say on his show "taking back America."  What does that mean?  Who and what is American nowadays?  Does Sean think all of the other people stole America from the rich old white guys?

There are more of all of the other people, the one's who sean is taking America back from, as he always says on his radio show, than ROWGs.  The big money Texas fat cats just couldn't count correctly, as was evidenced by our wonderful election.  Maybe President Obama should include the one sane republican in his advisory committee to balance the insanity of all of the other repubs constantly trying to block him.

Let the republican party purge those crazy people--they are giving their party a bad name--and the repubs and dems can come together and move the political conversation forward.

PS...I know there are other well qualified and well intentioned republicans...please comment and list them and their attributes..don't bother to include the limbaugh and hannityesque nuts...really...they are moving the political conversation backward, not forward.
--
chloelouise

Posted by Chloelouise at 8:42 AM No comments: