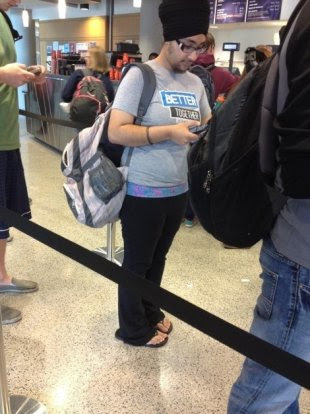 This picture of Balpreet Kaur sparked bullying -- and then inspiration -- on Reddit. (Photo via Reddit)After someone snapped a photo of her and posted it on online, Balpreet Kaur was ridiculed for following the tenets of her Sikh faith. But instead of hiding or lashing out, she politely posted a reply—and turned a bullying situation into a inspiring example of tolerance, support, and inspiration.

Related: Teaching our Kids Tolerance After the Sikh Temple Shootings

The photo was taken apparently without Kaur's knowledge while she was waiting in line at the Ohio State University Library. In the photo, Kaur's hair is hidden by a large, black turban. She's wearing a T-shirt and yoga pants, glasses, and is looking down at her cell phone; her sparse facial hair is clearly visible. A Reddit user posted it to the "Funny" forum with the quip, "I'm not sure what to conclude from this."

Comments started pouring in, making fun of her appearance, asking if she was transgendered, and taking her to task for not plucking, waxing, or shaving.

After a friend told her about the thread, Kaur decided to respond to the taunts herself—and take the opportunity to educate people at the same time.

"Hey, guys. This is Balpreet Kaur, the girl from the picture," she wrote. "I'm not embarrassed or even humiliated by the attention [negative and positive] that this picture is getting, because it's who I am."

As a baptized Sikh woman, Kaur—who is from Ohio—said that she is forbidden from altering her body, as it is considered a sacred gift from God.

"The overarching principal is this body is a tool for service," she explained. "We have to maintain and take care of it while cherishing its original form." That means that going to the hospital and taking medicine is fine, because one should be healthy in order to be of service to others. But cutting one's hair or removing one's facial hair is forbidden, even if societal norms dictate otherwise.

"My hair doesn't stop me from being normal or doing service so its not a hindrance," she said in a later post. "I've been to the doctor regarding this and it's just a side effect of my hormone levels during my teenage years. The hormones have returned to normal, but the hair is still there. That's fine :) I don't regret anything, nor do I view it as an unfortunate thing."

Sikhism was founded in the Punjab region of India in the 15th century; there are approximately 30 million Sikhs in the world. Followers believe in the equality of all human beings and in a single, infinitely powerful, omnipresent, genderless God. Instead of heaven or hell, the religion promotes salvation through a spiritual union with God; ego, anger, greed, attachment, and lust are considered the Five Evils. Sikhs do not believe in recruiting converts, though they welcome those who wish to join their faith. Once baptized or formally initiated into the faith, they vow to wear five religious symbols at all times, one of which is leaving their body hair uncut.

"Yes, I'm a baptized Sikh woman with facial hair. Yes, I realize that my gender is often confused and I look different than most women," wrote Kaur, who is the president of the Ohio State University's Sikh Student Association. "My attitude and thoughts and actions have more value in them than my body… by not focusing on the physical beauty, I have time to cultivate those inner virtues and hopefully, focus my life on creating change and progress for this world in any way I can."

Her words quickly inspired readers on Reddit and elsewhere to reevaluate their reactions. A cross-post on the Facebook page for Kaurista garnered more than 6,750 likes and more than 850 comments.

"I know that I don't have the courage to live that purely," Shannon Dolce commented on Facebook. "I am inspired to live MORE true to how my creator sees me, though."

"I think we can agree that even the non-religious can benefit from taking a page from your book -- thank you," wrote a Redditor named "anothertimearound".

"You are awesome. If your faith has made you this well-adjusted and positive and secure in your own skin, and focused on the things in life that truly matter, then I am glad that there are Sikhs in this world." Reddit reader "Anna Mosity" wrote. "The world could use more people like you."

A few days later, the Reddit user who posted the picture started a new thread to apologize to Kaur.

"I felt the need to apologize to the Sikhs, Balpreet, and anyone else I offended when I posted that picture," the Redditor wrote. "Put simply it was stupid. Making fun of people is funny to some but incredibly degrading to the people you're making fun of. It was an incredibly rude, judgmental, and ignorant thing to post."

"I've read more about the Sikh faith and it was actually really interesting. It makes a whole lot of sense to work on having a legacy and not worrying about what you look like. I made that post for stupid internet points and I was ignorant." he continued. "Balpreet, I'm sorry for being a closed minded individual. You are a much better person than I am. Sikhs, I'm sorry for insulting your culture and way of life. Balpreet's faith in what she believes is astounding."

Kaur says that she's happy to spend time explaining her religion and her appearance to people. "I do not think explaining myself and the way I am is a waste of energy because storytelling in itself is a way to fight the apathy in this world," she explained in a follow-up post on Thursday. "By simple interactions like this, we can better understand each other and make this world more open and loving even if it is just one person or many."


This was copied from Yahoo--Shine
Posted by Chloelouise at 12:31 PM No comments: