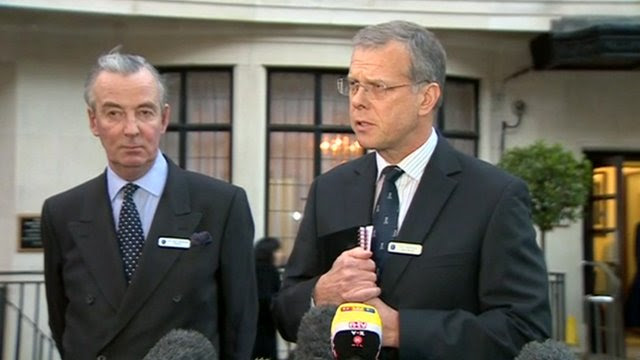 A nurse at a London hospital who took a hoax call about the Duchess of Cambridge has been found dead.
The Duke and Duchess of Cambridge said in a statement they were "deeply saddened" by the death of the nurse, named as Jacintha Saldanha.
King Edward VII hospital paid tribute to "a first class nurse" who was the "victim of a hoax call."
Details of the pregnant duchess's medical condition were unwittingly revealed to two Australian DJs.
The DJs, from Sydney radio station 2Day FM - which says it is preparing a statement - posed as the Queen and Prince Charles in a call early on Tuesday morning.
The duchess had been admitted on Monday for acute morning sickness, and was discharged on Thursday.
'Excellent nurse'

We can confirm that Jacintha was recently the victim of a hoax call to the hospital ...[we had] been supporting her throughout this difficult time”

John Lofthouse King Edward VII chief executive
BBC royal correspondent Peter Hunt said he understood Mrs Saldanha - who was married with two children - was the person who answered the call from the Australian DJs and was not the nurse who discussed the duchess's medical condition.
Mrs Saldanha, a duty nurse, answered the telephone because it was 05:30 GMT in the morning and there was no receptionist on duty.
The BBC understands Mrs Saldanha had not been suspended or disciplined by the hospital.
The BBC's Nicholas Witchell said it had been suggested to him that she had felt "very lonely and confused" as a result of what had happened.
The St James's Palace statement said the duke and duchess "were looked after so wonderfully well at all times by everybody at King Edward VII Hospital, and their thoughts and prayers are with Jacintha Saldanha's family, friends and colleagues at this very sad time".
A palace spokesman later added that "at no point did the palace complain to the hospital about the incident".
"On the contrary, we offered our full and heartfelt support to the nurses involved and hospital staff at all times."
In a statement outside the hospital, King Edward VII chief executive John Lofthouse said: "We can confirm that Jacintha was recently the victim of a hoax call to the hospital. 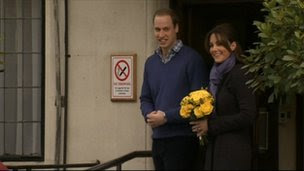 The duchess left the hospital on Thursday
"The hospital had been supporting her throughout this difficult time."
He added: "Jacintha has worked at the King Edward VII's Hospital for more than four years.
"She was an excellent nurse and well-respected and popular with all of her colleagues."
Royal College of Nursing chief executive Dr Peter Carter, meanwhile, said it was "deeply saddening that a simple human error due to a cruel hoax could lead to the death of a dedicated and caring member of the nursing profession".
Scotland Yard said officers were called at 09:35 GMT on Friday after reports of a woman found unconscious at an address in Weymouth Street, central London. She was pronounced dead at the scene.
Police said the death was not being treated as suspicious.
'Very sorry' The prank call - made by presenters Mel Greig and Michael Christian - was pre-recorded before it was assessed by lawyers and broadcast on 2Day FM.
Speaking on their show, they called it the "easiest prank call ever made" and described their mock British accents as "terrible".

Presenters' initial apology
In the call, another nurse was tricked into revealing specific confidential information about the duchess's medical condition.
The DJs later apologised saying they were "very surprised that our call was put through".
"We thought we'd be hung up on as soon as they heard our terrible accents.
"We're very sorry if we've caused any issues and we're glad to hear that Kate is doing well."
The Twitter accounts of both presenters have now been deleted while the BBC's Duncan Kennedy, in Sydney, said it was difficult to get on the 2Day FM website.
The Australian Communications and Media Authority (Acma) has said it had received complaints about the call.
Radio station 2Day FM has previously been in trouble with Acma for incidents including one when a 14-year-old girl revealed on air that she had been raped.
Posted by Chloelouise at 9:36 AM

Email ThisBlogThis!Share to TwitterShare to FacebookShare to Pinterest
Labels: hippa, perils of nursing