Rolling Stones Start Up Reunion With London Blowout Including Mick Taylor.....Everyone I Know Has Been Waiting For Mick Taylor 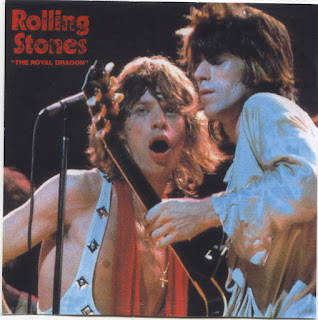 The Rolling Stones celebrated 50 years on the road with a concert at the O2 arena in London.
Neil McCormick of the Daily Telegraph was at the concert. Speaking about the band's history, he told The Today Programme: "They were the first rock group in a modern sense to have a singer that didn't play an instrument. That was very unusual.
"But also, they were playing for the love of the music - and they formed what is the idea of a modern rock group."
He added that Sunday evening's concert was "an extraordinary show".
"The playing was as good as ever... they played a fantastic selection of material," he said.

Artists in this Article

Rolling Stones Rip Through Paris Club Set
The Rolling Stones warmed up for their upcoming string of arena dates with a raucous 12-song gig at the LaTrabendo club in Paris on Thursday.
Rolling Stones Q&A: 'This Juggernaut Is Almost Unstoppable'
Mick Jagger and Keith Richards of the Rolling Stones talk to Billboard abour their upcoming live shows and their plans for 2013.
Rolling Stones Bringing Party to Brooklyn
As exclusively reported by Billboard back in August, the Rolling Stones will play a date at Brooklyn's Barclays Center next month - and it's the opening U.S. date of the group's "50 and Counting" celebration.
Rolling Stones Flee After Fans Invade Stage in 1965 'Charlie' Clip
In 1965, Rolling Stones manager Andrew Loog Oldham commissioned director Peter Whitehead to shoot cinema verite footage of the group's two-day September Irish tour in an effort, as he put it, to let the lads get their "celluloid legs" and see who most captivated the camera offstage. The footage was collected into a slapdash film called "Charlie Is My Darling" (because the Stones' taciturn drummer was deemed most camera-friendly) that was shopped the following year but never officially released or aired -- although wobbly bootlegs have been circulating for decades -- and the reels sat in film cans, largely untouched, for more than 40 years.
Rolling Stones Arouse Madness in 'Doom and Gloom' Video
Still hell raising after all these years, the Rolling Stones unleashed a rawk-ous video this week for their "Doom and Gloom" single. Starring "Girl With a Dragon Tattoo" actress Noomi Rapace as a zombie-shooting, breast-flashing bad girl who appears to be losing her mind, the video was shot in a Paris warehouse and directed by Swedish filmmaker Jonas Akerlun.
"It took us 50 years to get from Dartford to Greenwich," said Mick Jagger to 20,000 close friends on Sunday night, at what you might call the lip of the 02 Arena stage. The Rolling Stones were in the process of laughing in the face of logic with an extraordinary, 150-minute celebration of their 50 peerless years.

This was the first of two 02 dates, with a second on Thursday, that have been widely pilloried in the British press for their exorbitant ticket prices. Jagger would soon acknowledge that discussion by looking to the top tiers of the arena and asking "How you doing up in the cheap seats? They're not that cheap though are they, that's the trouble."

For all the controversy, the fact is that you never hear anyone coming away from a Stones gig complaining that they didn't get value for money, and so it was again here. Eventually, that is. Despite some engaging guest performances including the much-reported reunions with former bandmates Bill Wyman and Mick Taylor, the core quartet didn't hit top speed until the show's second half. When they did, they were untouchable.

They were introduced by an irreverent film tribute featuring both "punters" and famous fans like Johnny Depp, Iggy Pop and Elton John, then by two files of black-clad drummers marching through the aisles. Augmented initially only by stalwart companions Chuck Leavell (keyboards) and Darryl Jones (bass), it was a delight to hear the Stones travelling back to their first first year of recording, 1963, to revive their second-ever single, "I Wanna Be Your Man." Dartford rhythm and blues was alive and well again.

Performing under a giant red lip, with a giant video screen behind them and a semi-circular walkway out front to stretch out on, they continued in '60s vein with "Get Off Of My Cloud," "It's All Over Now" and "Paint It Black."

Vocalists Lisa Fischer and Bernard Fowler joined the line-up stage left, and before long Mary J. Blige was making the first of the evening's cameos to recreate Merry Clayton's soulful wail on "Gimme Shelter." If the overall performance was somewhat rough and ready, she and Jagger shared some impassioned vocal empathy.

Perhaps the most noticeable aspect of the opening exchanges was the role of Keith Richards, playing mainly rhythm as Ronnie Wood frowned in concentration at taking so many lead lines. That began to change on "All Down The Line," before their contemporary Jeff Beck came on for a full-throttle, first-ever performance of Don Nix's blues favorite previously recorded by Beck, "I'm Going Down." Suddenly the 02 was a sweaty R&B club.

In a middle section of depth and variety, the "Bridges To Babylon" track "Out Of Control" packed a powerful punch, the new songs "One Last Shot" and "Doom & Gloom" held up well, and Wyman joined the proceedings for both "It's Only Rock 'n' Roll" and "Honky Tonk Women." Richards, in supple vocal form, seemed to take great confidence from his familiar mid-set spotlight for "Before They Make Me Run" and "Happy" and, at last, became the Human Riff we yearned for.

Perhaps the unique highlight, though, came when Mick Taylor, the guitarist who helped change the very fabric of the Stones in just five years with them from 1969, rejoined for an exciting, epic version of "Midnight Rambler." The grins and pats on the back from Messrs Richards and Wood were heartfelt proof that it was pretty special for them too.

With Charlie Watts keeping up an almost impossibly vigorous backbeat, the show was now en route to glory. That was thanks in disproportionate measure to the incredible showmanship of a frontman who roared like a vocal leviathan and sprinted back and forth in as brilliant a display of gymnastic showmanship as he has ever given.

They performed the closing "Jumpin' Jack Flash" like a band playing for their lives, and with so much still in the tank that one thing became clear: the Stone age does not end here.
Comments 8
print rss
Subscribe to Billboard magazine today!